Lucas di Grassi was unequivocal in his opinion that the deletion of his qualifying times prior to yesterday’s Formula E London E-Prix was an injustice that could have been avoided if specific data had been analysed by stewards of the meeting.

The ROKiT Venturi driver was denied a chance to progress through to the duel phase of qualifying and described in detail to The Race how the incidents that were deemed as impeding Mitch Evans and Robin Frijns in the first phase of group qualifying for yesterday’s London opener.

The situation stemmed from di Grassi and Venturi deciding to go for an out/push plan in the first six minutes instead of an out/prep/push strategy which most of the other drivers decided to pursue.

This ensured that while the Brazilian was on his fast lap, some other drivers, Evans and Frijns among them were warming their tyres in readiness for their push laps.

At this stage, di Grassi stated that he “had to overtake three or four (slower) cars in my lap” as he set an initial benchmark of 1m14.680s.

“In one of the corners, (Nick) Cassidy was there, I lost one or two tenths. But that happens,” added di Grassi.

Then, when he was on his cooldown lap, several competitors were on their quick laps. This is where it was deemed by the stewards of the meeting that di Grassi held up both Evans’ Jaguar at Turn 4 and Frijns’ Audi at Turn 16. 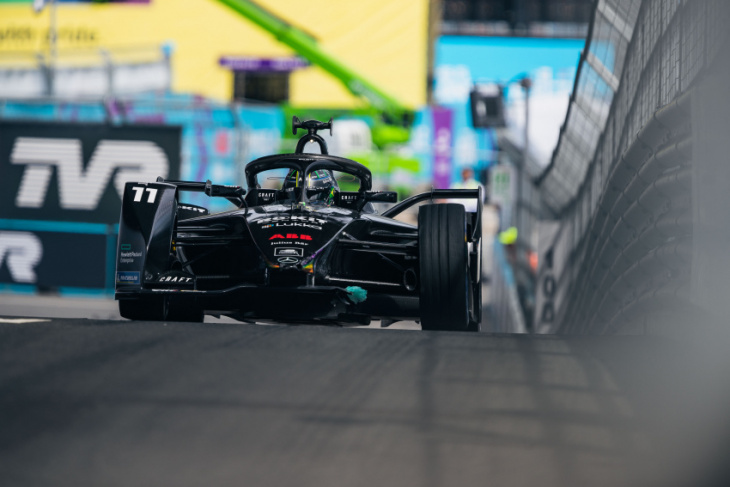 But di Grassi claims that team data proves that although visually there appeared to be impeding, actually there was no discernible disadvantage caused to either car.

“I was making the gap for everybody but here in London, there are only a few spots where you can actually make enough space that you don’t compromise anybody’s lap.

“So, I did (make space) and I let Pascal Wehrlein through, and I let Cassidy by and Stoffel (Vandoorne) went through too.

“I saw Mitch, I did the chicane (T1/2), let Mitch by, it was close but that segment that he passed me was his purple segment and it was 0.008s slower than his second lap segment, in the IP1 the mini sector.”

Teams use delineated sub-divisions of the standard three timing sectors on all circuits which are sometimes known as ‘mini-loops.’

Ironically, it appears that initially this was done by the FIA so it could have more driver positioning points but eventually the data was opened up to the teams.

The Race understands that at the ExCeL Arena track these are split into three mini-sectors within the three standard sectors seen on official timing and track maps.

All laps deleted 🤷‍♂️ for “blocking” Evans, which goes purple in the segment I’ve “blocked” him 🤷‍♂️, few thousands from fastest overall.

The data is very very clear. 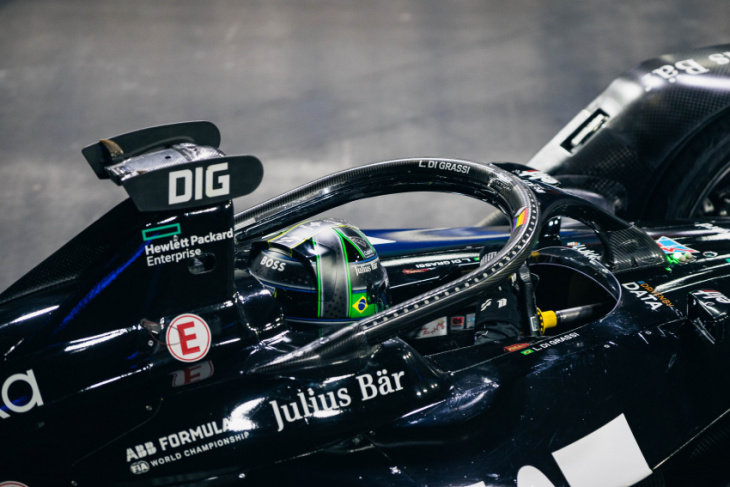 Di Grassi completed the rest of his qualifying session and made it through to the duels in fourth position but this was subsequently scratched when the stewards gave notice that he had breached Article 16.1 g and Article 31.4 of the 2021/2022 Sporting Regulations.

These state that ‘The lap time of any driver who, during his out lap or in lap, obstructs another driver who is on his timed lap, may be deleted’ and Illegitimately impeded another driver during overtaking’ respectively.

This confined di Grassi to a 22nd and last position on the grid start and began both an official petition through Venturi’s right as per the International Sporting Code, which was subsequently dismissed, and also an animated discussion with Mitch Evans.

“Talking to him, I said, ‘did I really mess you up,’ (he said) “visually, you’re too close”. This does not mean anything. You (Evans) can stay still flat out.”

Di Grassi was candid on the Frijns incident too. Although also unseen by the TV cameras di Grassi said that he was aware of the Envision Audi and “didn’t want to be in the kink for Robin.”

“I accelerated to the inside of T16 and braked on the inside,” added di Grassi.

“He came on the outside and outbraked himself and went all the way to attack mode locking all the four wheels. He completely screwed his lap by himself.”

However, Frijns told The Race that he “was very much compromised as I had to go way offline” by the Venturi and this contributed to his moment at the T16 hairpin. The stewards agreed after studying video evidence. 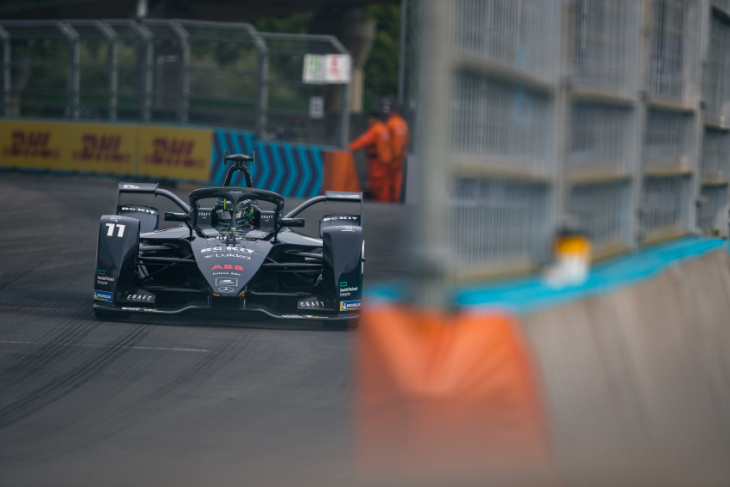 But di Grassi was clear that the subsequent data he and his team studied should have been a key factor in evaluating the incidents.

“First, they (the stewards) never asked for data,” he said.

“They didn’t even know that the IP1 (mini-loop) existed.

“When I asked, I went to the (stewards) room and I said, ‘did you check that his segment was purple’ and they said, ‘we did the analysis on the video.’

“Either people didn’t lose time, or they improved in the other laps. So, I think it’s completely unfair.

“I get my two laps deleted because of that. That’s why I was not happy about it. I think in this scenario you should qualify as normal, analyse the data, ask for my data, my brake data, everything, analyse it properly with time, and then you give me (a penalty) after if that’s the case of giving me a penalty. 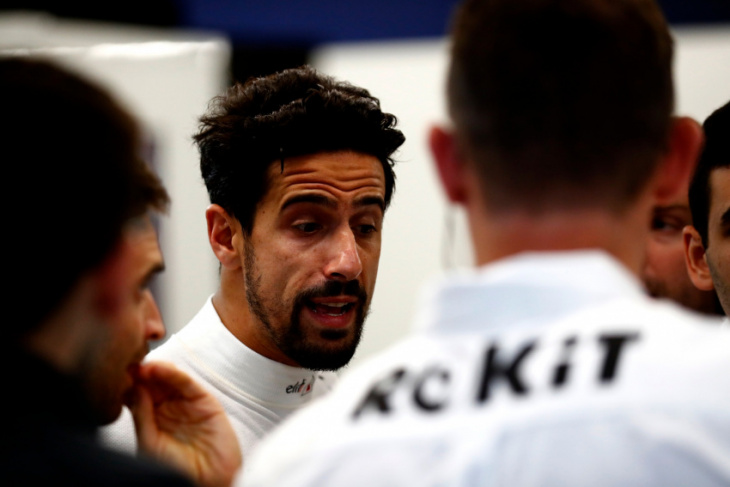 “For me with the penalty system, they had to make a decision very quickly and it’s not the right process. Then after this time, the decision is done.”

In addition to the lack of publicly available TV coverage of the incident, the GPS (Global Positioning Systems) that teams use for tracking cars in detail was not working. This is due to the vastness and depth of the ExCeL Arena construction meaning that accurate connections are not available.

Di Grassi’s anger was not only followed up via the official Venturi- led petition which ultimately failed, but also via the team’s managing director, Susie Wolff.

She posted a stinging tweet after the events had unfolded.

Today's decisions have left us completely speechless. Incredible job by Lucas to climb from P22 to P9 in the race. We won’t be giving up this title without a fight and we won't let injustice hold us back. (2/2) pic.twitter.com/u8QHg5JuG0

The tweet, which featured an image of Wolff with team manager Delphine Biscaye, looking bemused, also described how she felt that ‘today’s decisions have left us completely speechless.’

Di Grassi came through from the rear of the field to finish a fighting ninth in a race which included a five-second penalty for a collision with Robin Frijns which ironically occurred at Turn 16 the same corner in which their qualifying dispute occurred.