Even before a wheel had turned in anger there were questions about Antonio Giovinazzi’s latest career move.

Something didn’t quite feel right. There Giovinazzi was, between the Qatar and Saudi Arabian Grand Prixs, two of his final three Formula 1 races, finding his feet with Dragon Penske, the team that had finished 11th from 12 teams in the previous two Formula E seasons.

Even those within the team knew they had no realistic prospects for improving significantly in the final Gen2 season in 2022.

This was largely thanks to a dual season set homologation introduced to ease the financial pain from the pandemic, meaning the team’s uncompetitive package would be carried over.

But that wasn’t the only thing that hindered the team. Its propensity to destabilise itself kicked in again as it split with its experienced team manager, Gary Holland, mid-test.

It was the latest spike of employee manoeuvrings, and it came just a few weeks after it had ditched plans to stay on as a manufacturer in its own right with what should have been its technical partner for Gen3, Bosch.

So how did Giovinazzi come to the decision of accepting an offer to drive for Dragon Penske in the first place? Were there no other options? What was the thinking behind committing to a season of – at best – mediocrity, at worst potential image damaging performances?

“They have had difficult seasons in Formula E but we see in a race there are different winners so you never know what will happen,” said Giovinazzi when asked by The Race why he had signed with the team at Valencia. 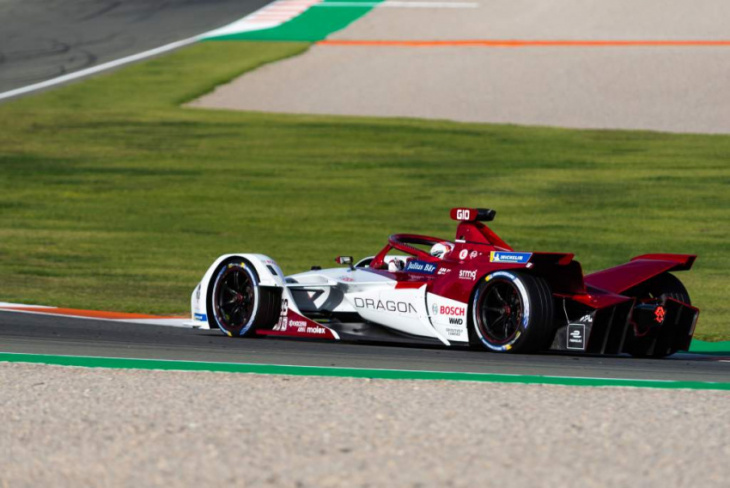 “Also I only found out I lost the [Alfa Romeo F1] seat in November, it was not ideal, but I like to know that first of all I can compete in this championship, to be motivated and everything and also to work with a team like Dragon. They did some podiums, and they did great some years ago.

“But I think Formula E is something different from F1 in that you know that you will go to [F1] races and Mercedes and Red Bull will win the race.

“Here you never know what will happen. So, we’ll see, and we are working for this, and I hope we can have a great season together.”

‘Hope’ is a big word in this context. Lots of people have hoped that Dragon could have reprised its giant-killing exploits of the first two seasons of Formula E between 2014 and 2016 when Jerome d’Ambrosio took a brace of wins, and where points and occasional poles were part of the team’s landscape, But racing at this level needs more than hope.

Those heady days seem long ago now as the Jay Penske owned team simply got stuck in a turgid spiral of ineffectiveness.

That should change next season when it hooks up with DS Automobiles and tries to replicate the success the brand enjoyed with the Techeetah team between 2018 and the present season.

But it’s clear that Giovinazzi will not be involved as the team has already secured Jean-Eric Vergne and Stoffel Vandoorne in what looks to be one of the most potent strike forces in Formula E history. 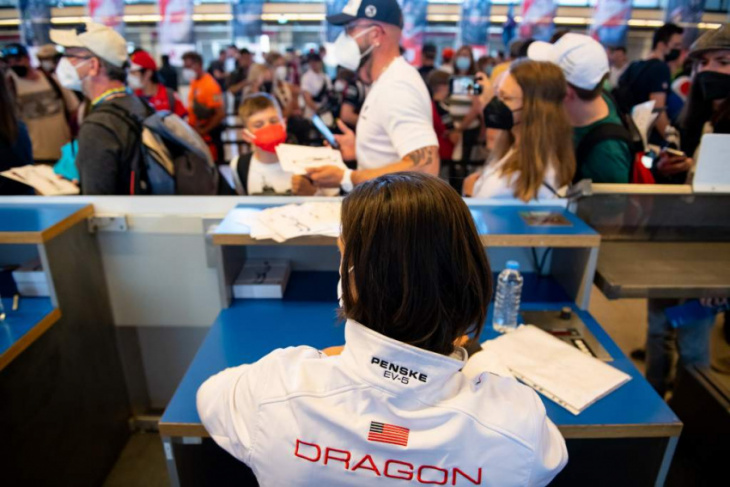 This fact therefore scratches off one theory from the ‘why did Giovinazzi take the drive in the first place’ mystery.

Giving he and his manager Enrico Zanarini, ex of the Eddie Irvine and Giancarlo Fisichella parish, the benefit of the doubt, the reasons for the deal with Dragon Penske must have been a combination of ‘just getting back on a horse’, any horse, and a decent pay day.

In itself this then begs another question. Did Giovinazzi and his team have any kind of strategy to take full advantage of a seat in Formula E for future gain and to get on the grid for the Gen3 era?

That surely must have been part of the thinking. Perhaps he could wrestle some performances from the Penske EV-5 and start outperforming team-mate Sergio Sette Camara?

A reality check. Halfway through the season that hasn’t really looked like happening at all.

This is not to say that Giovinazzi should be coming into Formula E and staking an immediate claim to a top drive by challenging at the sharp end. That was never a possibility, but at the very least he should be in a position after half a season of at least matching team-mate Sette Camara on occasion.

The stats aren’t pretty. Of the eight races so far Sette Camara is 5-3 up in qualifying, but of those grid positions all but one of Giovinazzi’s wins are because of the odd and even make up of the grid structure outside of the duels and not because of lap time.

In the second Berlin qualifying he was marginally quicker than his team-mate albeit in the better track conditions of Group B. 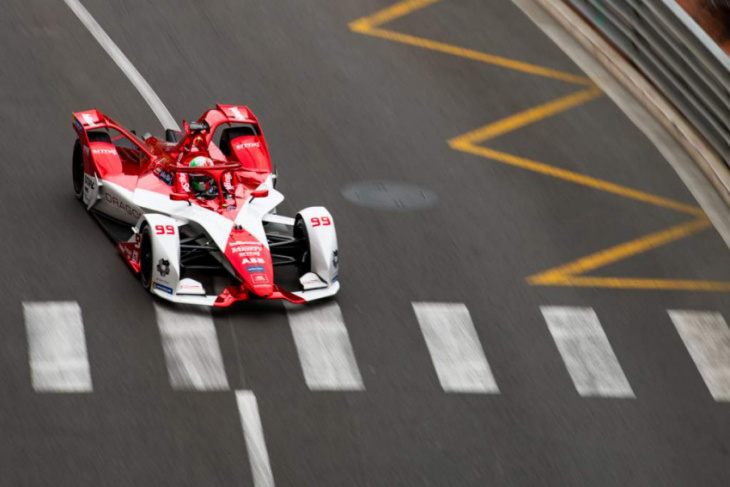 It was in Monaco that Giovinazzi had his best showing but it ended with only a meagre 16th place finish opposed to Sette Camara’s 13th.

That came on the back of a glum Rome where he tagged the wall in the second race when he was again striving to keep with the backmarker pack.

In the second Berlin race aerial photographs showed Giovinazzi seven car lengths away from the tail of the pack mid-way around the first corner at the start as he employed a drastic energy saving in the hope a safety car might toss some crumbs his way. It didn’t and he was consigned to another race of misery in which he was close to being lapped by leader Nyck de Vries.

It simply begs the question: is this any way to go racing?

To Giovinazzi’s general credit the motivation hasn’t appeared to dip. He’s clearly far from happy racing where he is, but the natural genial demeanour remains. So does his affinity with the team, which loves him.

His side of the Dragon Penske is doing its best and a result of sorts could come his way in the second half of the season with tracks like London and potentially Seoul perhaps able to allow some ‘cork in the bottle’ heroics.

He’s working with a bright and talented engineer in Connor Summerville, who plied his Formula E trade at Jaguar working with the likes of Alex Lynn and James Calado. The desire isn’t lacking but the results, so far, very much are.

“The motivation is always there, especially in these moments,” Giovinazzi told The Race in Monaco. “The motivation needs to be actually higher because you want to improve, you want to see the real improvements race after race.

“Of course, Rome was tough because it was after two months from the last race in Mexico.”

On his 2023 prospects, which are believed to be slight in FE, and now pointing much more in the direction of a Ferrari Hypercar World Endurance Championship programme and continuation of F1 reserve and sim duties, he was uncommitted last month.

“Of course, we’ve seen the new car now, the Gen3 car. It’s quite cool, good to see a lot more speed. I would be excited to drive this.”

If Giovinazzi’s future appeared a little opaque after his F1 career fizzled to a halt last December, it now seems even more unclear. 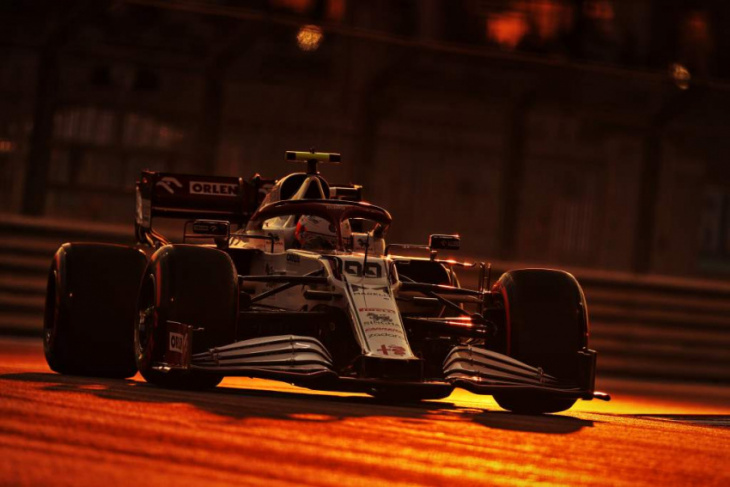 If ever there was a year for a sabbatical from racing, perhaps 2022 was it for Antonio Giovinazzi. Then again, the genial Italian appears the type that loves to race wherever he might be in the overall picture.

Maybe this is one of few positives for him right now. Because unless miracles are bestowed upon him, as they were at Valencia last season when Nico Mueller snaffled a second place for Dragon Penske amid the farce when most of the field ran out of useable energy, another ignominious eight races are likely to have to be endured from now until mid-August.