The changes to the second sector at the ExCeL Arena Formula E circuit will feature what is already being termed a ‘Bus Stop’ style chicane reminiscent of the former Spa-Francorchamps layout will dramatically affect the laptime and nature of the racing this weekend.

That is the message from two experienced Formula E drivers, Sebastien Buemi and Alexander Sims, who have been simulating the modified circuit this week.

The double chicane is being implemented this week to forsake the unpopular two hairpin corners at the Turns 10-12 section of track. This area was the scene of several incidents last July, including the one which effectively pitched Stoffel Vandoorne out of championship contention when he was torpedoed by Oliver Rowland’s Nissan.

Now, that area of track outside of the ExCeL Arena hall and between the Prince Regent and Customs House DLR railway lines on the northside of the venue, has been made into a right/left and then left/right tight chicane.

Teams have been sim testing the new layout over the last week with several telling The Race that the configuration will be difficult in several senses.

Firstly, it takes away some natural regeneration capability over the lap because the braking is not as significant as in the hairpins, and secondly because there are presently just basic flat Formula E style kerbing elements laid down at the chicanes.

It is anticipated that there will be a lift off the throttle for the chicanes but they are expected to be reasonably quick.

OH NO! A lockup from @oliverrowland1 sends him straight into @svandoorne dropping them both down the field..

The changes have been made in addition to a further reduction, as reported by The Race on Monday, of the available energy that drivers and teams will have to play with.

These two factors are set to substantially change the dynamics of the racing in the sinuous Docklands track, and according to Nissan e.dams driver Sebastien Buemi, it may make overtaking even more difficult.

Talking to The Race about the track changes for this coming weekend the 2016-17 champion reckoned that the changes would make it “even more difficult to pass in that section of the track compared to the hairpins”.

Buemi cited the minimum speed of the chicane being “quite high and the saving is not big, so it’s going to be very difficult to pass.”

The new area of track is expected to be at least “five seconds per lap faster, which means we will go for more laps,” added Buemi.

“I think it’s going to be a bit different but I don’t think that overtaking will be easier. I think it might be even more difficult. I would guess that in terms of accidents it should be better, obviously because people should try less of a move there. 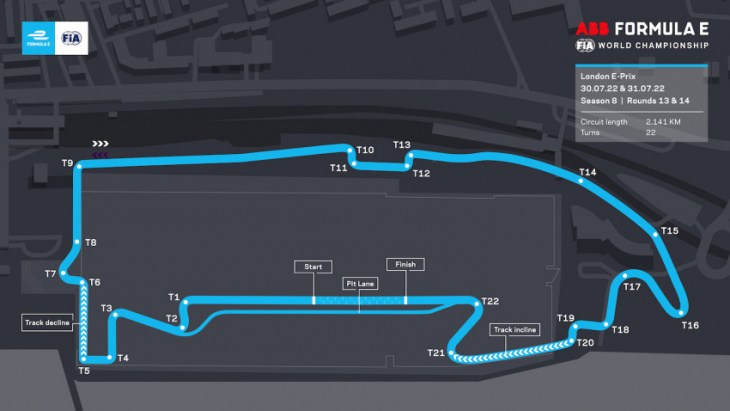 “However, it’s still quite a high-speed chicane, so it still might be having some mistakes there.

“I think somehow it was needed but unfortunately, they don’t have much space to do something very good, let’s say.”

Buemi was last year disqualified from the first London E-Prix when he was deemed to have gone over the energy allowance that was granted for the race.

His Nissan e.dams team forgot to put the automatic run down programme on his when he reached the maximum the car stops accelerating once you reach 52 kilowatt hour.

Mahindra’s Alexander Sims was slightly more positive in his assessment of the changes, telling The Race that after a simulator session this week he thought that “the introduction of the bus stop type corner is a nice change for driving the London track as it has a good flow to it now”.

“The only thing in my mind is that it maybe takes away a bit of an overtaking opportunity as the deceleration zone is a lot smaller now than the hairpin,” he added.

“But to be honest, it was touch and go whether you would actually make it around the corner if you went up the inside before anyway so hence the amount of crashing there was there. I think overall it’s a positive move.”

The constraints that Formula E is juggling with in trying to work in the relatively short amount of space for the track are not to be underestimated according to Formula E Holdings Sporting Manager, Frederic Espinos.

“We have a lot of constraints with the train and there is a big electric board there so we don’t have a lot of flexibility,” said Espinos.

“We have tried to find with all the constraints we have, what we can do, which is more suitable for better racing.

Espinos declared that access areas to and from the main hall and in particular the section that dives underneath the Aloft Hotel, which also includes a separate tight chicane, are tricky.

“The second one (chicane) is really mandatory because here we need to slow down the cars because it’s super narrow and we cannot move anything because it’s between the train and the wall that we cannot touch,” he said.

“We really need to reduce the (bunching) of cars there, and then there is an area where there is space we cannot use because we need to give access to the stadium and so on.

“It’s a very complex area in terms of constraints, so we cannot really do what we want, but we do what we can.

“I think this version we have is better for racing, less contact and maybe it brings a better overtaking situation.”