The failure that may have cost Mitch Evans his 2022 Formula E title shot appears to be of the same component that brought his 2021 championship tilt to a painful end.

The Jaguar driver ground to a halt when in fourth position just as today’s London race entered a three minute and one lap extra time phase.

Evans had come through from 14th on the grid and was heading title rival Stoffel Vandoorne at the time, meaning he was on course to trim the Mercedes driver’s lead to 22 points with 58 available in the Seoul finale.

That became 36 points when the 12 Evans was on course for in London disappeared as he stopped his car with no power, and Vandoorne was promoted one place, grabbing two points more as a result.

Evans had experienced what he told The Race was “some strange behaviour for a couple of laps” prior to the failure.

“We were trying to fix it with some changes and I thought we’d got on top of it but unfortunately the car switched off going into Turn 9 and I had to do a power cycle to reset everything,” he explained.

“But there was something bigger so I couldn’t actually continue and at that point I’d fallen down so many places.

“It seems an inverter has failed which is not great.

“Everyone is analysing the data now so I’ve not got a full picture on it, but it seems like the inverter has gone. 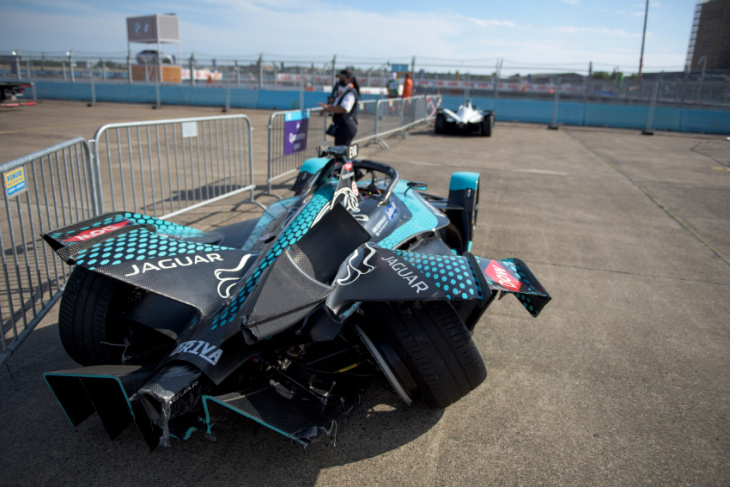 A year ago in the 2021 Berlin finale, an inverter problem stranded Evans on the grid just as he looked best-placed to win the title – his third place being the best starting position of any championship contender in the 13-way fight the old format had created.

On that occasion Evans was collected by fellow title rival Edoardo Mortara and the Jaguar team discovered that an externally-supplied part had caused the shutdown.

Today’s failure is not believed to be of a similar type according to Evans, who told The Race that “from what I understand, it’s a separate issue”.

“From what they’ve seen they’ve said ‘look, we’ve not ever seen this before’ and the way that the car behaved I’ve never experienced before as well so, no, I don’t think it’s any similar thing.

“Obviously it’s something within the inverter, which is the same as last year but different parts, as I understand.”

Jaguar TCS Racing team principal James Barclay said that he was unsure if a braking oddity for Evans the lap before the shutdown was linked to the terminal problem revealing itself.

“We need to do all our analysis,” he said.

“It was a shame because we were kind of leaving it all for a final push for the end. 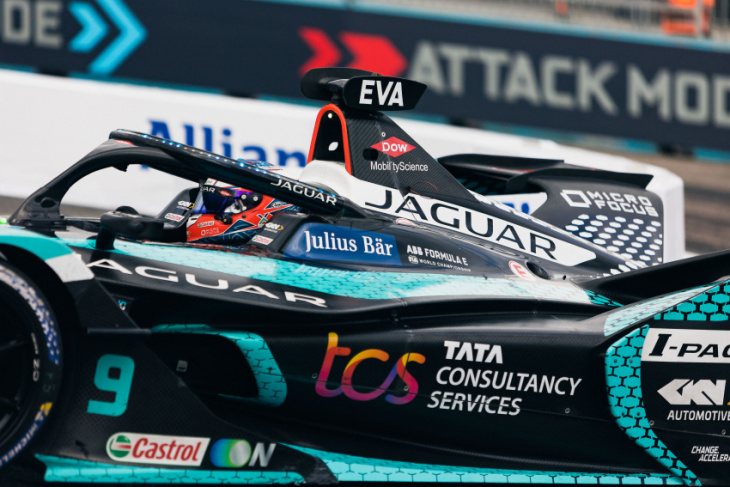 “We knew what we were looking for, we knew the front two had consumed a lot, Jake [Dennis] was coming back to Nyck [de Vries] and we were hoping we could really latch onto the two and then try and fight for the podium.

“The [final shutdown] did come quickly, maybe some indication at the start but that’s all what we need to look into.”

Evans feels his now rank outsider status in heading to Seoul next month will alleviate any direct pressure on himself and Jaguar at the decider.

“It’s a slightly different feeling now going into Seoul, maybe a little less pressure, but I’ll just go with the same approach and try and win both races, like I did this weekend,” he said.

“But it sucks, you know. I was hoping to go in with a real fight.

“But we’ll continue until it’s no longer possible.”

Mortara also still has a remote title hope, 41 points behind Vandoorne after a bruising London weekend in which he didn’t score any points amid a host of incidents.