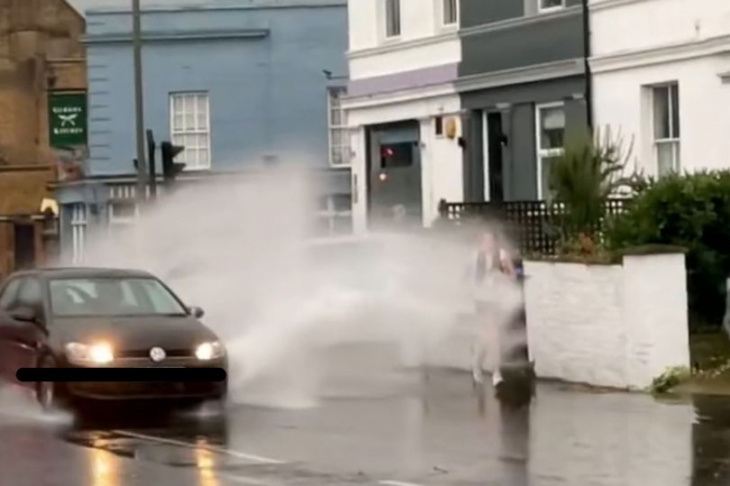 Drivers have been slammed after a video emerged of half-marathon runners getting soaked in West London. Competitors were completing a 13.1 mile route in Kingston when they were drenched by cars that had driven into a puddle. The footage was captured on Sunday (October 23) and some viewers of the clip have now called for the police to get involved.

In the video, a black Golf can be seen splashing the runners. A huge wave of water covers one woman as she seems to disappear behind the spray. The man who filmed the incident believed that this splashing was ‘deliberate’ and posted the video to Twitter.

He said: “Watching the runners in the #kingstonhalf while waiting for my daughters singing lesson to finish. Shocking lack of respect for other road users (aka, people not in cars). Well done everyone who ran in such dreadful conditions.” Later adding: “Seemed like every 5th or 6th car was actually aiming to soak the runners.”

Thousands of people viewed the video and were angered by what they saw. One woman said: “Car drivers (not cars) are meant to slow down to prevent splashing or wait until there’s either a gap to not splash pedestrians/other road users.

“Or, they can enter the other lane as if overtaking a parked car. It’s not hard is it?” Another adding: “Horrible abuse of vulnerable road users.”

There were calls for the police to be notified about the alleged offence with some Twitter users saying the driver has acted ‘illegally’. Another adding: “I’m sure that this is an offence!”

It is not clear whether this splashing would be seen by police as an offence, but under the Road Traffic Act 1988, it is illegal to drive “without reasonable consideration for other persons”. The law also bans “driving through a puddle causing pedestrians to be splashed”. A £5k fine and three points on your license can be the punishment.

Want more from MyLondon? Sign up to our daily newsletters for all the latest and greatest from across London here.

Keyword: Anger at 'inconsiderate' drivers 'deliberately soaking' runners with calls for police to get involved