Zero Motorcycles Debuts Its All-New Electric Adventure Bike, the DSR/X — and We Test-Rode It

Here's everything you need to know about the brand's most ambitious, aggressive off-road beast yet. 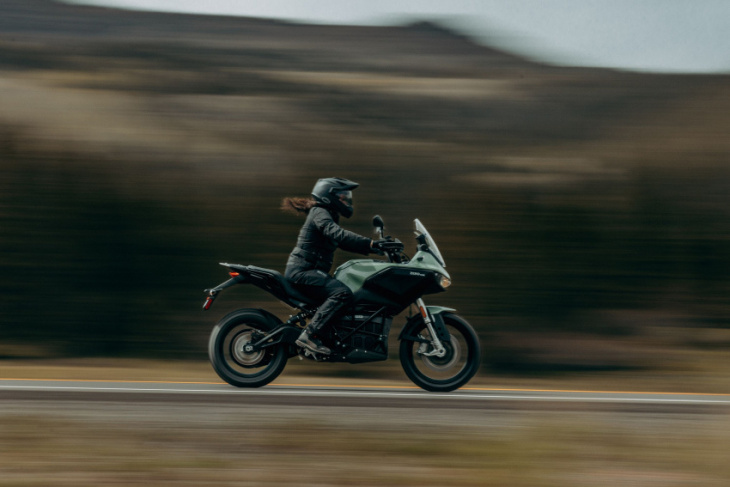 If battery-powered innovation is an art form, consider Zero Motorcycles the AI of creation. For 15 years, the California-based electric motorcycle manufacturer has rolled out bike after bike that shatters molds and expectations of what an electric vehicle is capable of. Today, Zero continues the march of progression with its latest release: the DSR/X adventure sport motorcycle.

“[It provides] the purest connection between the rider and the road that I’ve ever experienced,” says Zero CEO Sam Paschel. But we didn’t want to take his word for it. So in addition to soaking up all the information I could about this daring new bike, I journeyed to the brand’s headquarters in Scotts Valley (about 30 miles south of San Jose) to check it out for myself. Here are the biggest highlights of the $24,495 bike, plus some notes from my test ride.

What makes the DSR/X stand out from the adventure sport crowd?

At 550 pounds, the burly-yet-nimble DSR/X is no joke: the brand-new Z-Force 75-10X motor produces a staggering 166 foot-pounds of torque and the Z-Force 17.3 kWh PowerPack provides ample power and the pinnacle of performance for the brand.

Like Zero’s previous models, the DSR/X uses the company’s Cypher III+ operating system to provide the purest adventure sport riding experience in the world. However, unlike its other bikes, the DSR/X packs some notable upgrades: the first is the all-new suite of Bosch Motorcycle Stability Controls (MSC), which now come with Off Road capabilities, optimized specifically for the responsiveness of the Zero electric powertrain. The technology is designed to deliver stability and traction on any surface. 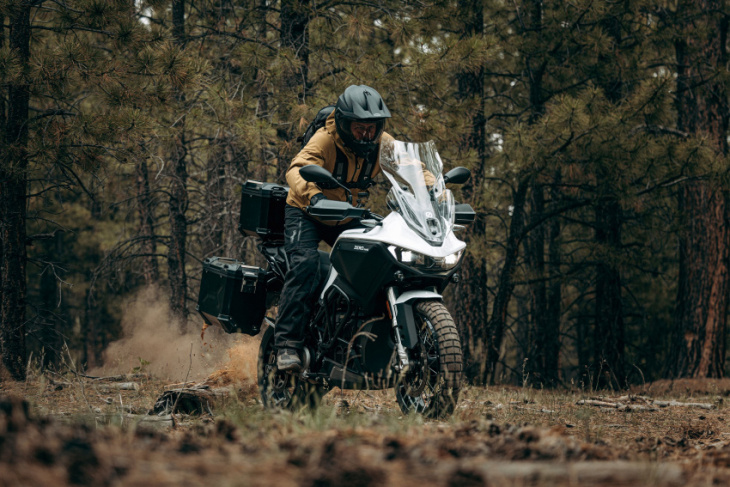 “This variation on our our existing and patented design produces the highest torque and the most precision-controlled motor we’ve ever produced,” explains Paschel. “What it’s able to do, from a traction control standpoint, when partnered with our electric powertrain… it does stuff that you shouldn’t be able to do, that’s kind of magical. Let’s say you’re sitting on gravel, and you open the throttle wide up — instead of spraying the person behind you, the bike just pulls forward at whatever the maximum speed is. It does things that a bike shouldn’t really be able to do.”

Park Mode is the newest addition to the Cypher III+ operating system, bringing more adaptability to the Zero tech suite. It’s no secret that adventure sport bikes aren’t the lightest motos on the market: to combat the heftiness of the DSR/X, Park Mode allows for a slow speed reverse and crawl function useful for maneuvering in tight or steep spaces.

What else is notable about the DSR/X?

Along with the improvements in traction control, stability and torque, the DSR/X also paves the way for advancements in design: the entire frame was engineered from the bottom up, to suit the kind of riding only adventure sport bikes can handle. The bike features increased ground clearance, almost eight inches of hand-adjustable front suspension, and three integrated storage compartments that have a total of 7.4 gallons of incorporated storage. 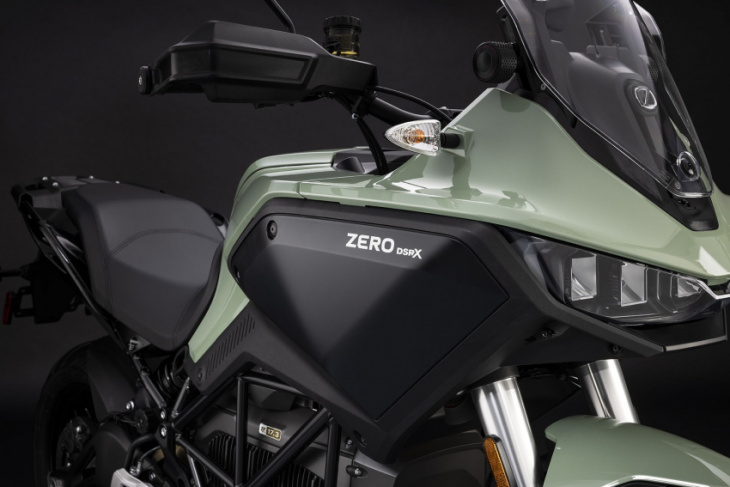 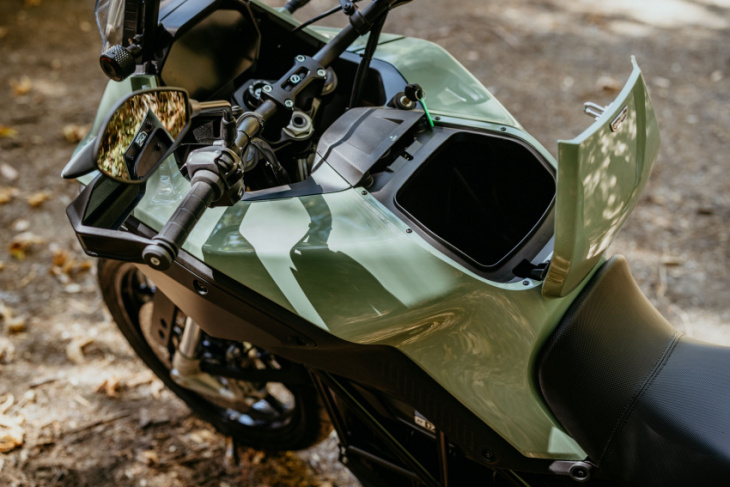 For those planning their next long-distance adventure ride, improvements in charge times and networks will be of interest: the DSR/X comes equipped with the fastest Level 1 and Level 2 charge capabilities on the market, thanks to the on-board 6.6 kW RapidCharge system.

Zero has also partnered with Backcountry Discovery Routes (BDR), which should be familiar to anyone who has ridden off-road. BDR is the North American leader in adventure mapping, off-highway route creation, and adventure motorcycle advocacy, and through their partnership, Zero and BDR are helping to identify where charge points are along routes that are already ready for electric off-road adventure sport riding.

But what about range? How far will the DSR/X go?

Zero says it put over 100,000 engineering hours into developing the DSR/X, and the dedication to craftsmanship shows: the on-road range of the DSR/X is 180 city miles, and the bike is capable of speeds up to 85 mph on the highway.

“The average recreational motorcycle ride on road, in the United States, is less than 80 miles,” Paschel points out. “And anybody that rides or sees these bikes knows that a relatively small portion are taken on-road and off-road. And of them, it’s a really small number, three to five percent of those bikes, that are out there actually get taken on these long point-to-point rides.”

All of which is to say that although range will be of concern for the small percentage of riders that want to hop on a bike with no plan and ride to, say, the tip of the Baja Peninsula on a whim, most riders won’t get close to running out of range on the DSR/X.

What does the DSR/X cost?

Out the gate, you’ll be shelling out just under 25 grand for Zero’s new bike — in this case, innovation does come with a cost. Although you’ll be saving money at the pump (since you won’t be using one anymore) there are other costs to consider. Similar to their four-wheeled counterparts, electric motorcycles come with a higher sticker price, and more cost at the front end of purchase. Harley Davidson’s 559-pound, internal combustion Pan America with a 31-inch seat height, for reference, is $17,319, a cool $7,176 less than the DSR/X. Probably the most well-known and respected bike in the adventure sport space space is the BMW GS, which has a similar base price to the Harley. Overall, electric bikes may save you money down the line, but you’ll pay for that tech up front.

It’s not often that high weight and nimbleness are found in the same package, but the DSR/X defies expectations around size and capability. Thanks to the bulk of the weight being located in the battery (and not in the traditional gas tank) the center of gravity on the DSR/X is much lower than a traditional gas-powered bike, which lends stability to the ride. 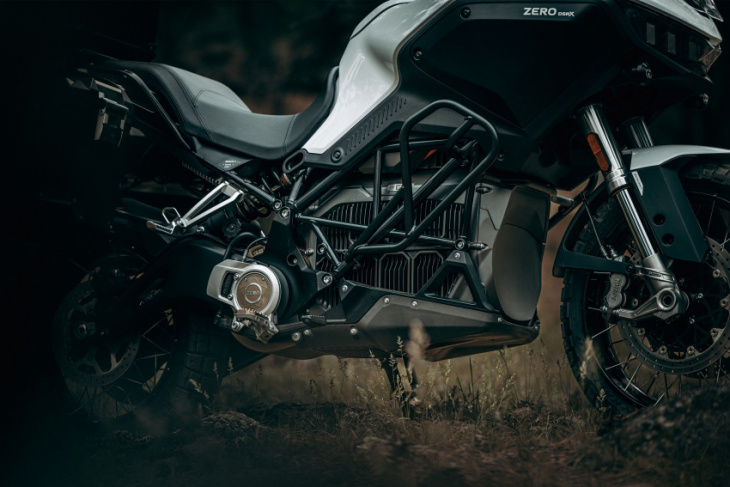 I tested the DSR/X on the winding back roads of Scotts Valley, where Zero has its headquarters. We rode both paved and un-paved roads, and I felt that the DSR/X truly shined where the pavement ends and gravel begins. The bike’s ride modes are finely tuned with notable differences between each: I found the Standard Mode to be the most pleasant for our riding conditions, with less engine braking, and more power, than Eco, which is the default mode on the DSR/X. 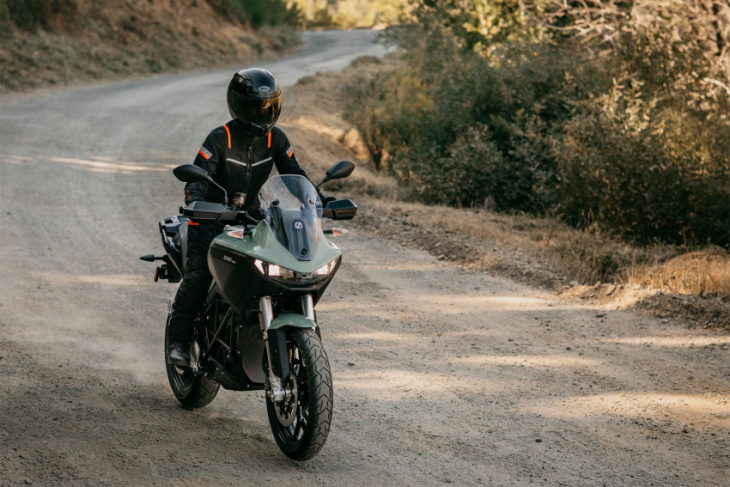 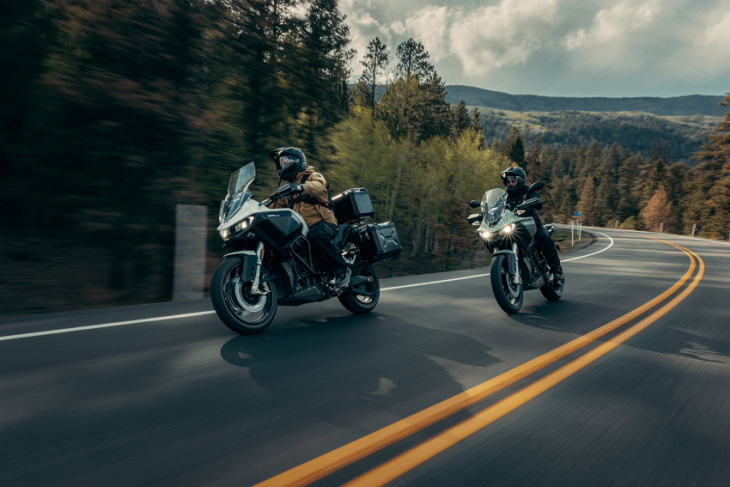 I should mention that for shorter or smaller or less experienced riders, this bike is a lot to maneuver. As I mentioned, it’s 550 pounds, with a standard seat height of 32.6 inches. Zero swapped the seat for a lowered one to help mitigate my 5’4″ frame, but even then, I was barely able to touch the ground with both feet, and the weight made starting and stopping a bit challenging.

However, once I was on the open road, I found riding the DSR/X to be one of the smoothest experiences I’ve had on a bike. Toggling between ride modes while on the move was seamless, and the increased torque made zipping up ascents about as fun as you can imagine. I was able to stuff plenty of accessories into the storage compartments, and after a couple hours of riding, I’d barely bit into the range. 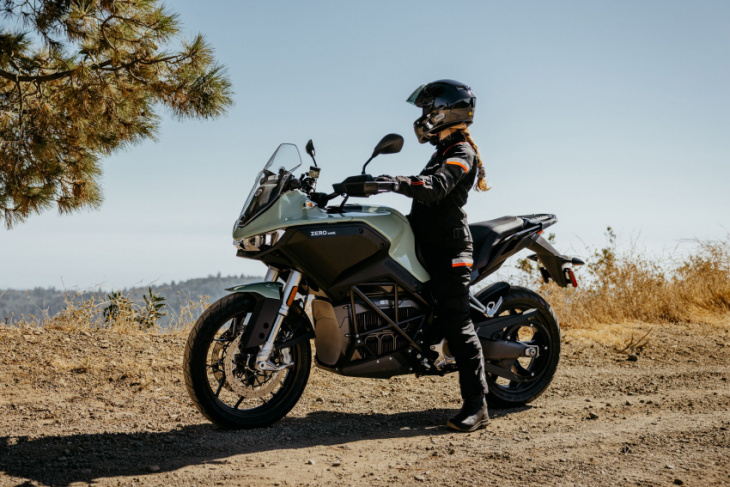 The DSR/X is agile and speedy, yet tough enough for gnarly terrain and range-y enough for a long trail session. If I were planning an adventure ride up the West Coast — with some smartly planned charging stops — I’d pick this bike out of any lineup.

If you’re interested in the first electric adventure sport motorcycle of its kind, you can purchase one starting today on Zero Motorcycle’s site, or at select retailers worldwide. The DSR/X is available in either sage green or white pearl, with a base price of $24,495. 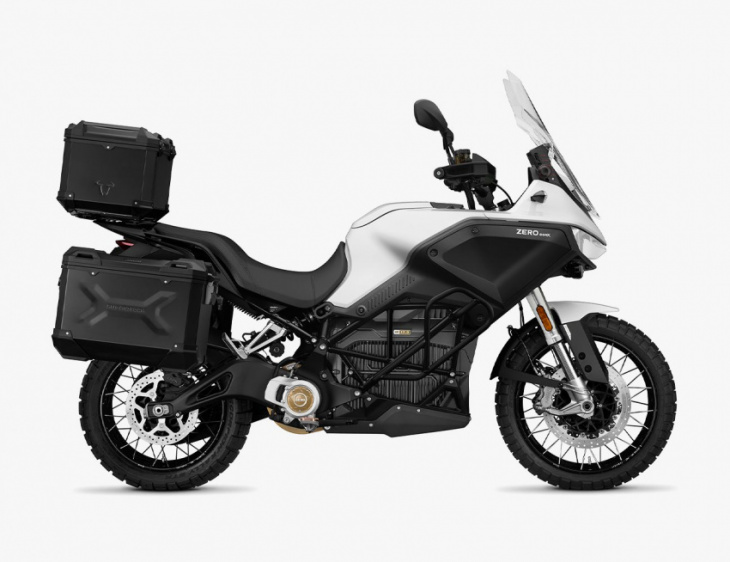 Keyword: Zero Motorcycles Debuts Its All-New Electric Adventure Bike, the DSR/X — and We Test-Rode It