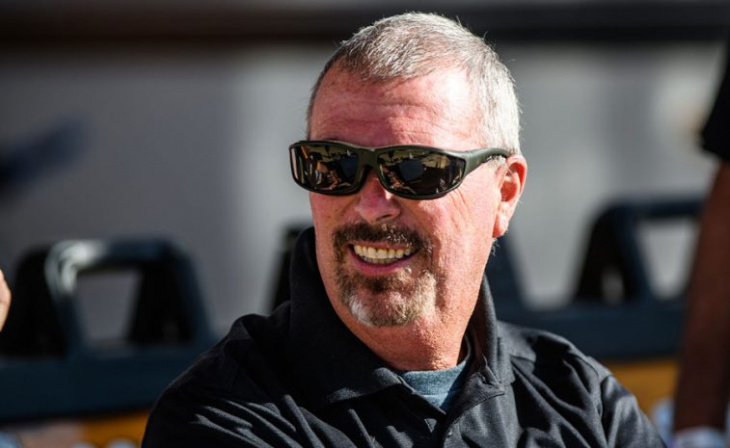 However, it’s something he can think about when he’s inducted into the National Dirt Late Model Hall of Fame on Saturday, Aug. 13. While the induction is something Eshelman will cherish, it isn’t something he’s thought about leading up to the moment.

“I know it hasn’t hit me yet, because I try not to think about it,” Eshelman said. “But once that happens, I’m going to be in there and recognized for my contributions to the sport with only three other announcers, which makes it a very small fraternity.

“Jimmy Mosteller, Brett Emerick, who used to work with [the World of Outlaws CASE Late Models], great announcer, and myself and James Essex going in. There’s only four of us that contributed to this sport in that respect.”

Eshelman has been announcing dirt races since 1982. He first grabbed a microphone at River Cities Speedway in Grand Forks, N.D., and while a Hall of Fame induction may seem like an honor at the end of one’s career, the Michigan native doesn’t plan on getting out of the booth anytime soon.

He still finds excitement in every race on the schedule, no matter where the World of Outlaws CASE Late Models visit.

“It’s still exciting; it’s still what I want to do,” Eshelman said. “What drives me is going from track to track, not being at the same track. I did that, and it was great. But to go to a different state and see totally different people. It’s still exciting to go see different tracks and see old friends every year.”

“Rick has dedicated his life to Late Model racing,” Carter said. “He takes great pride in knowing the drivers and enjoying the race and not only communicating that to not only the fans in the stands but the people that have been listening and now watching his career.

“He brings life and energy and excitement to the racetrack with him and tries to portray that in a way to entertain race fans.”

Even though the excitement of entertaining fans drives Eshelman when he’s at the track, he cherishes the relationships he’s built the most. As someone who announces hundreds of drivers throughout the season, he’s humbled to go into the Hall of Fame with drivers like Don O’Neal and Brian Birkhofer.

“It’s actually pretty humbling and an honor to have known these guys this long,” Eshelman said. “All of the drivers that are going into the Hall of Fame this year, I’ve announced their races, and most of them I’ve announced a win that they’ve had.

“So, to have relationships with all these guys, it makes me feel like I belong.”

Eshelman’s career has lasted 40 years in dirt racing, meaning he’s played a role in some of the most significant events in both dirt Late Model and racing history — especially at Eldora Speedway.

Two of those events stand out as his favorites.

“Being the announcer at Eldora and announcing the first-ever [Eldora] Million, and the first ever million-dollar, non-wing Sprint Car race,“ Eshelman said. “Nobody else can say they announced a million-dollar Late Model race and the [Mopar Million] in the same year.”

Those moments behind the microphone help make up Eshelman’s longstanding career — many of them as the World of Outlaws CASE Late Models announcer.

This weekend, the moment he never dreamed of can finally cross his mind as he enters the sport’s upper echelon by joining the National Dirt Late Model Hall of Fame.

“It’s a group of people that I’m a part of that makes me feel very proud to be able to accomplish something like that, which I never set out to do,” Eshelman said.

FAIRBURY, Ill. — Sixty-two answered the bell, and 16 are locked-in to the main event. The DIRTcar Summit Racing Equipment  Modified Nationals portion of the 32nd Prairie Dirt Classic kicked off Friday night at Fairbury Speedway  and contested four individual 20-lap Showdown features. In similar fashion to his Friday night victory in ...

Erb Wins In Return To Racing At Red Hill