But two other planned models, including the EV Car, appear to be on the back burner.

EV startup Arrival, perhaps best known in the industry for its microfactory approach, is gearing up for the start of its electric Van model production in one of those microfactories. The company revealed this week it is focusing on this model in the near term, while hinting that its Bus (and likely the passenger Car model as well) are now on the back burner pending the influx of more capital.

Arrival plans to begin producing the Van in Bicester, UK, this quarter, slated for deliveries to UPS and other customers this year. The Van already received European Whole Vehicle Type Approval earlier last spring, but production in Charlotte, North Carolina, near the company’s US headquarters, has been moved to 2023.

The company says it has created a $300 million platform for occasionally selling stock to raise funds, which will allow it to operate through 2023, at a minimum, without needing to raise more cash.

However, this reorganization of priorities has not been without victims. “Customer trials and investment in the Bus microfactory will continue once the Company secures additional capital,” the company added. 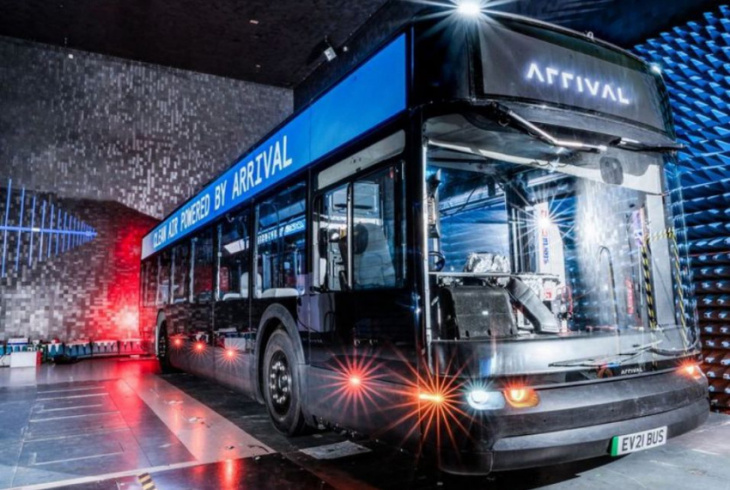 The Bus model is the second Arrival project out of three that has been developed to production readiness, but now faces an uncertain future.

Arrival did not mention anything about the current production outlook for the striking EV passenger Car concept it revealed last year, originally meant for ride-hailing app drivers, but its fate now seems equally tied to the receipt of more capital investment.

“We have had big achievements in Q2 including the European certification of our Van and Bus products and successful internal trials of both Van and Bus on public roads,” said Denis Sverdlov, Arrival founder and CEO. “In addition, we’ve made recent strategic decisions that will allow us to start production this quarter in Bicester (UK), deliver our first vehicles to UPS this year, and start production in Charlotte (US) in 2023.”

Arrival now faces long-awaited competition from Rivian, which began delivering production models of its own van model weeks ago, as well as from General Motors’ BrightDrop, which started small-series production last fall.

The company expects a slow start of production at Bicester this quarter, with just 20 units expected to reach customers in the fourth quarter of this year, with the rest slated to be customer demos.