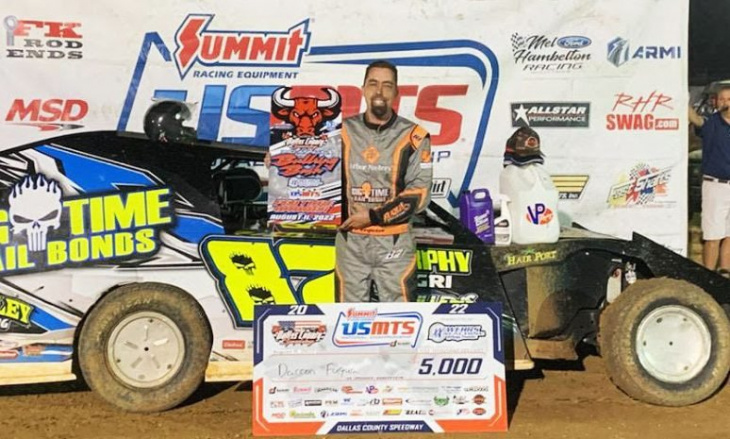 The first turn got a bit bumpy for polesitter Jake O’Neil and fellow front-row starter Terry Phillips got the advantage on the opening lap. Just four laps in, however, Phillips suffered a flat tire and stopped on the track to bring out the yellow flag.
O’Neil set the pace for the restart with Jason Hughes, Zack VanderBeek, Shane DeVolder and Tanner Mullens following in his tire tracks.

O’Neil went to the high side and briefly padded his lead, but Hughes reeled him in and made the pass for the lead with 12 laps in the books and lapped traffic looming ahead.

Halfway through the 42-lapper, Darron Fuqua found himself running second while the left rear tire of O’Neil was rubbing the fender and smoke billowing from the tire.

With Hughes struggling to get around a pair of back-markers, Fuqua wheeled around the outside to take the lead on lap 31. Three laps later, O’Neil’s tire finally let go and he stopped at the top of turn four and caused the third caution of the race.

Nine laps remained when Fuqua brought the field back to the green flag with Hughes, Mullens, DeVolder and Dereck Ramirez in tow.

Great battles ensued between Hughes and Mullens for second while Dustin Sorensen came up to mix it up with Ramirez and DeVolder. Meanwhile, Fuqua left the field behind and cruised to his career-first USMTS triumph.

The 2018 USRA Modified National Champion from Mayetta, Kan., pulled away to win by more than three seconds while pocketing $5,000 for his efforts.

FAIRBURY, Ill. — Sixty-two answered the bell, and 16 are locked-in to the main event. The DIRTcar Summit Racing Equipment  Modified Nationals portion of the 32nd Prairie Dirt Classic kicked off Friday night at Fairbury Speedway  and contested four individual 20-lap Showdown features. In similar fashion to his Friday night victory in ...

Erb Wins In Return To Racing At Red Hill