Is it practical? No. Is it hilarious fun? Yes. 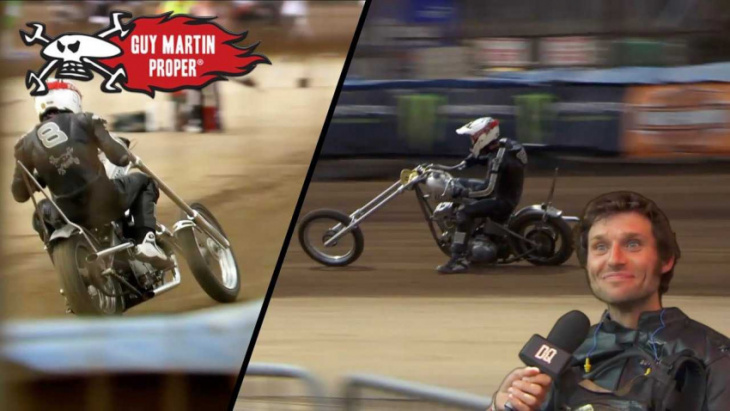 Motorcycle racing is awesome, but sometimes it can take itself too seriously. The higher the stakes get, it seems, the more stressful and the less fun it can become. That’s where something like the U.K.’s DirtQuake festival comes in, where everyone who shows up is welcome to “run whatcha brung” in a number of classes, no matter what it is. Add in Guy Martin flogging his Krazy Horse chopper around a flat track, and a good time is practically guaranteed.

Martin recently shared some of the fun on his YouTube channel, with a dip into the 2017 event. By this point, Martin had already been competing in the class for a handful of years, all with varying results. As bike people already probably know, bikes with seriously raked out forks aren’t terribly easy to turn. That makes hustling them around a dirt track like this, even if you’re only turning in one direction, a special sort of challenge.

In this clip, we get to see before, after, and during the race—including an introduction to French racer Louis Breton, who thinks that he may have the first two-stroke chopper to take part in this event with his custom Yamaha YZ 250 build. Whether it’s first or not is probably beside the point—it’s definitely unique, and isn’t that kind of the point?

Both racing and motorcycle shows can absolutely get a little too serious at times, but the point of DirtQuake seems to be showing that they don’t have to be. The reason a lot of people get into bikes in the first place is to have fun, isn’t it? We like to talk about how practical bikes can be all the time—and they CAN be—but why can’t having fun be a part of your everyday practical life? If you lose the fun, that’s when you start to lose your mind. That’s when whatever’s going on in your life starts to crush you, and that’s what the bikes that you love are an excellent antidote against.

Unfortunately, like so many events that were hard-hit by the global pandemic, DirtQuake hasn’t officially been held in the U.K. since the August, 2019 event. If you look at the official webpage right now, as of August 26, 2022, there’s a big banner on the front page that says, “Currently, there will be a DirtQuake event in 2023! Stay tuned for more news. Any thoughts for the event, please email dirtquake@dirtquake.com.”

Here’s looking forward to a bright light in moto culture returning to the scene soon.

Keyword: Watch Guy Martin Slide A Chopper Around A Dirt Track At DirtQuake