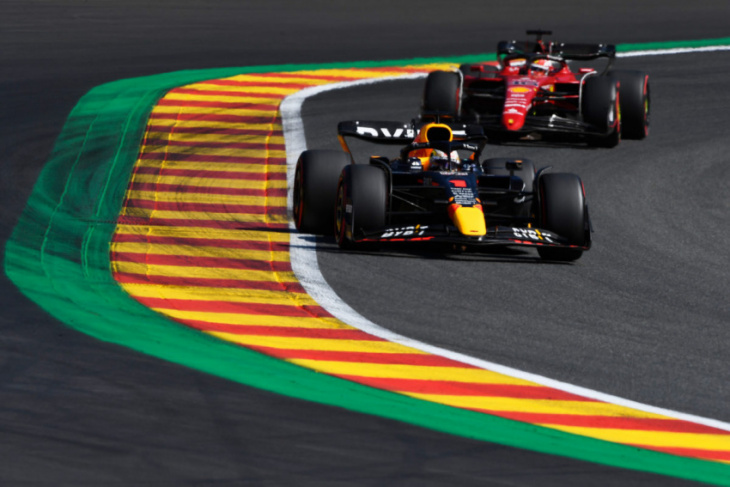 Max Verstappen was in a class of his own as he charged from 14th on the grid to victory in the Formula 1 Belgian Grand Prix.

The Dutchman crushed his rivals to win at a canter, almost 18s clear of team-mate Sergio Perez in what was a Red Bull one-two.

Carlos Sainz finished third, struggling for pace to drop away from the race leaders, hanging on to see off George Russell in the closing laps.

Leclerc was classified sixth after he picked up a five-second post-race penalty for speeding in pit lane after a high-risk call from Ferrari to steal the fastest lap bonus in the closing stages backfired spectacularly.

At the race start, Sainz headed the field while Perez found himself mugged by Alonso and the two Mercedes as they rounded La Source.

Contact between Hamilton and Alonso at Les Combes saw the former launched skywards.

Though he was able to continue, his car trailed smoke.

The Mercedes was clearly wounded and slowed around Fagnes as the field queued up behind, unable to immediately find a way through.

He was quickly told to stop the car over the radio, his race over by the end of the opening lap.

There was more drama at Les Combes on Lap 2, Nicholas Latifi spinning after running wide on the exit, tagging Valtteri Bottas as he fired back across the road.

The Alfa Romeo Sauber became beached in the gravel as a result, the Safety Car deployed for the stricken Finn.

It was a hectic start to the race, with Sainz leading Perez, George Russell, Alonso, Sebastian Vettel, Daniel Ricciardo, Alex Albon, and Verstappen.

Having reported smoke from his front-right, Leclerc pitted under the Safety Car, swapping from the soft compound tyres to the mediums.

Racing resumed at the end of Lap 4, Sainz locking up into the Bus Stop Chicane which ultimately delayed Perez such that he was vulnerable to Russell.

Struggling for straight-line speed, the Mercedes instead was forced to defend from Alonso who attacked as they climbed the Kemmel Straight.

At the end of the restart lap, Verstappen moved into sixth into the chicane, Ricciardo offering no defence as the Red Bull eased its way by.

Under braking into Les Combes half a lap later, the Australian fell behind Albon too.

Verstappen’s charge forward continued as he passed Vettel at the end of Lap 6, promptly moving him into Alonso’s slipstream.

With DRS enabled, the Red Bull driver eased through on the approach to Les Combes on Lap 7 to take fourth. That became third a lap later as he eased by Russell.

In the pack, Leclerc made up two places on Lap 8, passing both Scuderia AlphaTauris as he climbed to 14th following his early stop.

Sainz pitted from the lead on Lap 11, releasing Perez into the lead shadowed by a frustrated Verstappen, who’d said he was “losing silly time,” just moments earlier.

The Dutchman moved into the lead at the end of the Kemmel Straight moments later, while Sainz found himself stuck behind Ricciardo as he rejoined.

That hindrance lasted only until Pouhon when the Ferrari found a way through.

Red Bull did not respond to Sainz’s stop, Verstappen remaining on track before setting a new fastest lap on Lap 13 with a 1:51.954s.

Perez headed to the pits at the end of Lap 14, a lap after Russell had been in, the Mercedes threatening to undercut the Mexican.

Following his stop, he emerged clear of Russell by some distance, and narrowly ahead of Leclerc who was unable to find a way through despite enjoying a slipstream up the Kemmel Straight.

Next time around, Verstappen headed in for a set of hard compound tyres, having started on the softs.

He rejoined second, just ahead of Perez, while Sainz held a comfortable advantage courtesy of the undercut.

Leclerc slipped back to fifth after Russell found a way through on Lap 16, using DRS on the Kemmel Straight to ease by the Ferrari.

It left the order, after the first round of stops, with Sainz leading Verstappen, Perez, Russell, Leclerc, and Alonso in the top six.

That changed on Lap 18 when Verstappen reclaimed the race lead, DRS making the overtake trivial on the run from Raidillon to Les Combes.

Perez was through on Lap 21, Sainz powerless to fend off the Red Bull as they braked for Les Combes.

Having slipped almost 20s off the back of Verstappen, Sainz boxed on Lap 26 for a new set of hard tyres, having run mediums previously after starting on softs.

Ferrari double-stacked its drivers, Leclerc taking on a set of medium tyres to feed out just in front of a train headed by Albon in ninth.

Perez stopped for a second time on Lap 28, the Red Bull driver well clear of Sainz to maintain an effective second place when he returned to the track.

Enjoying a near 30-second advantage, Verstappen pitted at the end of Lap 30 for what was his last scheduled stop.

He resumed with an 8s advantage over his team-mate, Sainz sitting third another 8s back.

With the second round of stops complete, Verstappen held a comfortable advantage over Perez, with Sainz third, then Russell, Leclerc, and Alonso.

In the closing third of the race, Russell began to reel in Sainz in third.

With eight laps remaining, just 2.1s split third and fourth, the Mercedes driver edged towards the Ferrari by 0.3s per lap.

However, a mistake at Stavelot on Lap 40 interrupted that progress and seemingly ended any chance of Russell stealing the final podium place.

That error cost more than 0.5s, the gap expanding back out to 2.5s with time quickly running out.

The Spaniard held on, finishing third ahead of Russell while ahead Verstappen eased to the race win.

He did so with an 17.8s advantage over Perez in what was a Red Bull one-two.

Leclerc finished fifth, pitting late in an effort to steal the point for fastest lap.

It saw him fall prey to Alonso as he exited the lane, reclaiming fourth on the run along the Kemmel Straight on the last lap. He ultimately missed out on the bonus point.

However, post-race he was handed a five-second penalty that saw the Monegasque driver demoted to sixth, raising questions as to why Ferrari rolled the dice over a single point, when ultimately it cost its driver two.

Behind them, Ocon was seventh ahead of Vettel, Gasly, and Albon rounding out the top 10.

Verstappen now heads Perez in the drivers’ championship by 93 points, Leclerc a further five points back.