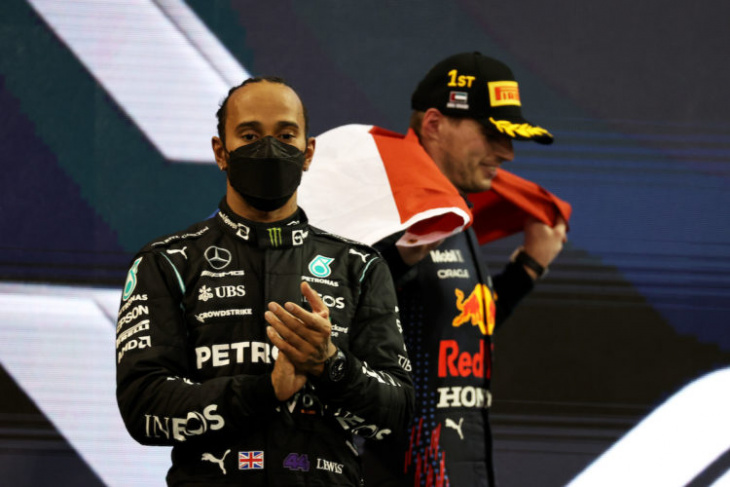 Hamilton and Verstappen went head-to-head in a close World Championship battle in 2021, with the latter coming out on top at the final round in Abu Dhabi.

The duo endured an intense season, going wheel-to-wheel and clashing on a number of occasions during the year.

Hamilton was chasing a record-breaking eighth title, while Verstappen was pursuing the first of his career.

When asked on the Beyond The Grid podcast if they were in each other’s heads in 2021, Horner said: “I think arguably, maybe more so in Lewis’ head.

Rosberg: Piastri will be out of F1 if he doesn’t beat Norris

“Because he’s the seven-time world champion that has everything to lose. Max is the young kid that’s taking the risks, that’s throwing everything at it, and got nothing to lose.

“Some of his overtaking last year was stunning and you felt that started to rattle Lewis, I think.”

One of the biggest talking points of the year was their clash on the opening lap of the British Grand Prix.

Verstappen beat Hamilton in the Sprint Race the day before, which Horner claims left the Mercedes driver “broken”.

“We definitely saw after Lewis qualified on pole at Silverstone and Max won the sprint race you saw Lewis, he was a bit broken after the Sprint Race,” he said.

“Had Max made it through Copse, I don’t think they’d have seen him again that afternoon, so there was an air of desperation building in as well.

“It was high stakes stuff and your emotions run high, but it probably affected Lewis arguably more than Max because, as I say, he’d got more to lose than Max. Max had everything to gain.”

Verstappen is on course to seal his second title later this season as he currently holds a 116-point lead in the Drivers’ Championship.

Hamilton, meanwhile, is enduring a more difficult campaign, and is yet to take a victory this year amid a slump for Mercedes.