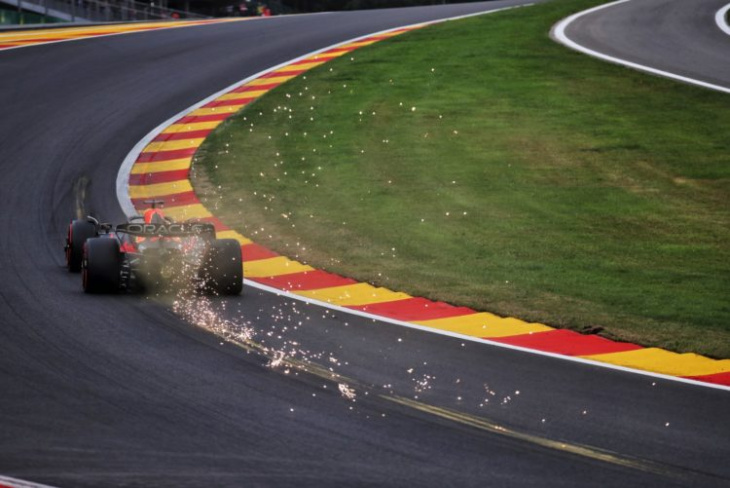 An array of engine and gearbox related penalties for several front-runners added an intriguing complexion to qualifying, with Verstappen and Charles Leclerc among the contenders facing a hefty grid drop.

Verstappen set only one lap in Q3 but his time of 1:43.665s left him over six-tenths clear of nearest rival Sainz.

Sainz was given a tow by Leclerc on his second push lap but had a so-so first sector before running wide through Fagnes later on in the lap.

Sergio Perez was third overall, and will join Sainz on the front row, while Leclerc was a notional fourth.

Verstappen and Leclerc will drop to 15th and 16th on the grid respectively, with Esteban Ocon – who qualified fifth but also has penalties – shuffling to 17th spot.

Fernando Alonso was sixth, ahead of the Mercedes drivers of Lewis Hamilton and George Russell, but they will each move up three places on the grid.

Alexander Albon was one of the stars of qualifying as he utilised Williams’ strong straight-line speed to grab his first Q3 appearance of the season.

Albon was ninth-best in Q3, ahead of Lando Norris, and will start Sunday’s race from sixth spot.

Daniel Ricciardo was knocked out in Q2, despite receiving a tow from Norris, but is poised to move up to seventh on the grid, ahead of Pierre Gasly and Lance Stroll.

Four of the five drivers eliminated in Q1 did not have penalties but were promoted a heap of places owing to the sanctions elsewhere.

Sebastian Vettel was 16th yet is expected to start from inside the top 10. He is due to line up in front of Nicholas Latifi, Kevin Magnussen and Yuki Tsunoda.

Tsunoda was on course to escape Q1 but locked up heavily into Bus Stop, leaving him 19th, but that will be converted into 13th due to the penalties.

Valtteri Bottas was slowest in Q1, effectively not setting a representative lap, but as he has only a 30-place grid penalty (in the form of a 15 plus 15) he will be shuffled in front of the drivers with ‘back of the grid’ demotions – because of the wording of Formula 1’s regulations.

As a consequence, Bottas is due to start from 14th place on the grid, despite qualifying last.

Verstappen, Leclerc, Ocon and Norris will slot in from 15th through 18th spot respectively.

Zhou Guanyu and Mick Schumacher made it through to Q2 but failed to progress further, and once their penalties are applied will form the back row of the grid.