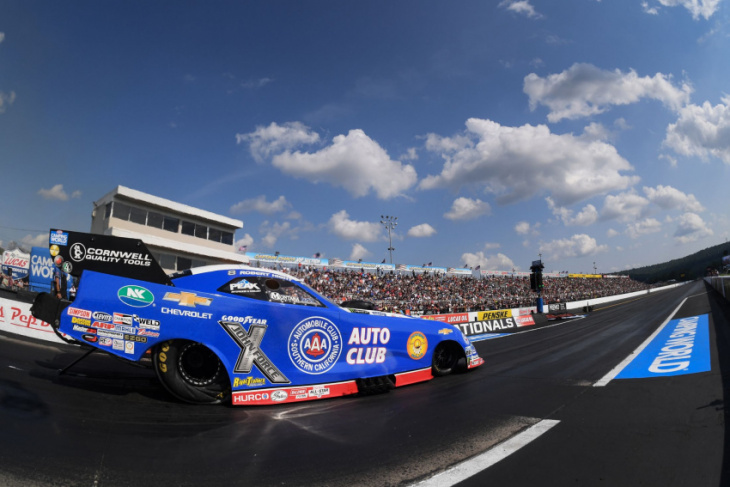 The NHRA Camping World Drag Racing Series kicked off its Countdown to the Championship with a TV ratings win.

The Pep Boys NHRA Nationals from Reading, Pa., on Sunday attracted an average of 1,678,000 viewers on FOX TV. The number marks the most for an NHRA show on FOX TV and is up 150,000 from last year’s previous record.

The race from Maple Grove Raceway’s TV numbers were buoyed by it’s prime Sunday afternoon spot in the broadcast schedule as a lead-in (or lead-out, depending on market) to the network’s NFL coverage. It was also the second event with NHRA team owner and three-time NASCAR Cup champion Tony Stewart providing commentary in the booth.

An NHRA representative said that the average of 1,678 million viewers was more than that of any IndyCar race this year, outside of the Indianapolis 500.

“It’s exciting to see the partnership between the NHRA and FOX continue to grow and lead to such tremendous numbers,” NHRA Vice President of Broadcasting Steve Reintjes said. “The NHRA on FOX team has continued to deliver several new innovations during the broadcast and we were thrilled to again have Tony Stewart in the booth. With a record-setting audience tuned in, our race teams put on an incredible show and we’re thankful for all our NHRA fans, as well as new fans who tuned in for the first time.”