Some most noteworthy car accessory trends have hit the auto world over the years. Some things make you question why everyone has suddenly decided that the perfect way to express themselves is to decorate their vehicle, from car lashes to fake portholes to wraps. Accessories that still leave many scratching their head are beaded seat covers, and the group that started this trend may surprise you.

What is a beaded seat cover car accessory? 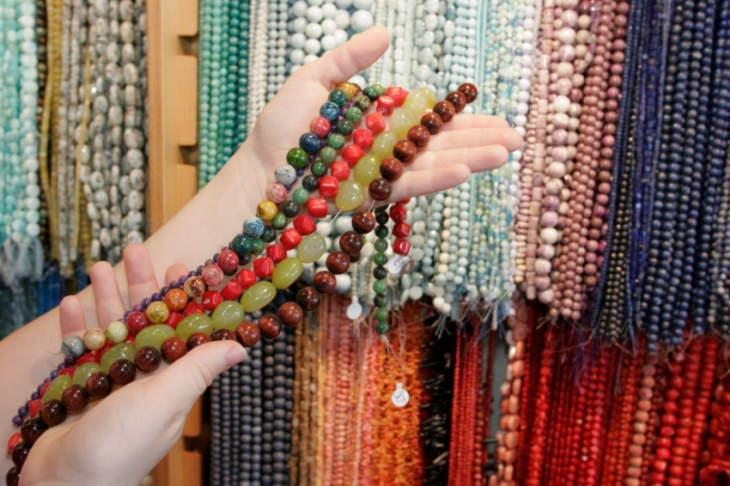 A collection of beads | Getty Images

Once upon a time, beaded seat covers were all the rage in the 1980s. Everyone wanted them, and the rumor was that it massaged your back while sitting on them. But what exactly were they?

Essentially, beaded seat covers were wooden beads strung together and flung over your car’s seats. According to Cover Beta, the idea was that it allows airflow between your body and the seat, which helps regulate your temperature and prevent sweat. It was also supposed to provide a great massage.

Many swore they were the greatest of comforts and provided the best ride they had ever had in a vehicle. And yet not many still use beaded seat covers, which begs the question of the glowing benefits since so many have slowly drifted away from using them.

This could have to do with the rise of lumbar seats, which can adjust as many as 40 different ways. Then there’s the fact that many vehicles now have heated seats. No one wants to sit on wooden beads which are slowly rising in temperature, especially if you’re not wearing several layers to protect you.

It’s important to note that experts state using seat covers with heated seats isn’t dangerous. That said, they were referring to cloth seat covers and not beads.

But who started this trend, and is there a chance that beaded seat covers can make a comeback?

The rise of the beaded seat covers

Sitting on wooden beads doesn’t sound all that comfortable when you talk about it. You’re strapped into one position with large beads pressing into your body. Some might even call that a form of torture.

As with so many trends, someone had to lead the way and convince others that this was a good thing. But who could it be?

If you said yoga instructors, you answered wrong. It was cab drivers who started this most unusual of trends.

According to Erie Insurance, “The seat covers originally caught on with New York City cabbies and long-haul truckers — folks who spend most of their days behind the wheel. And as everyday motorists observed the trend, they decided to try it for themselves.”

Beaded seat covers have lost their appeal as a car accessory

They say all good things must end, which appears to be the case with beaded seat covers. While they were once one of the most popular types of seat covers on the market, they have been relegated to one of those ‘Do you remember when memes.

Like so many retro fashions, there’s always a chance they could make a comeback for a brief period. As cabs are slowly becoming a thing of the past as Uber and Lyft become more popular, it won’t be the cab drivers who help beaded seats rise from the ashes of obscurity.

The good news is that they’re still available to purchase if you choose to. Some even have some pretty cool designs, and they’re relatively affordable. It may also solve the problem of your passengers fighting to sit in the front seat because they don’t look comfortable, no matter what the benefits may or may not be.

Keyword: This Car Accessory Had a Messaging Effect and Was Made Popular by Cab Drivers