The Lada Granta Has No Airbags or Radios: Russian Car Safety

Regarding car safety, the Lada Granta checks none of the boxes. After a short hiatus due to the Russian invasion of Ukraine, the Granta has resumed production. However, it is missing some key elements like airbags, anti-lock brakes, and a few other things. If you are here for the Lada Granta price, you can pick one of these up for $12,000 or 658,300 rubles.

Is the Lada Granta a good car? 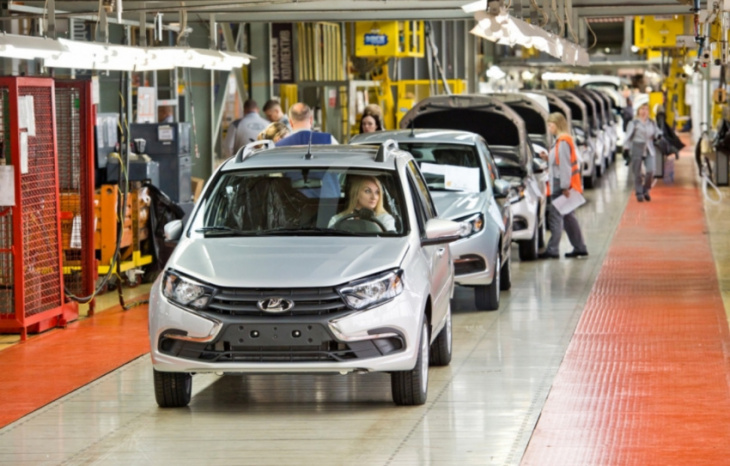 The Lada Granta on the production line | Lada

Unfortunately, whatever kind of car the Lada Granta was at one point, it is no longer. According to a recent article by Drive, Western sanctions mean most car safety features are no longer included. There are no trim levels at this point, just a single model that can barely be considered a modern car.

Renault owned Lada until the invasion began, when the automaker backed out of the collaborative vehicle. Without Renault’s ability to gather components for the Granta, Lada was forced to pare down the already bare-bones car. That also means the production of new vehicles is out of the question for now as well.

Production of the Classic’22 Lada Granta continued without airbags, anti-lock brakes, or emergency call systems. It has four speakers that connect to nothing. There is no touchscreen or radio any longer, but Lada says the car is “multimedia ready.” No, Apple CarPlay isn’t a feature. With the reasonable Lada Granta price, did anyone expect it to have a radio?

The Lada Granta has power steering, though

The new version of the Lada Granta does have a few car safety features. It has power front windows (the back windows aren’t mentioned), power steering, and car seat anchors. Daytime running lights and an “on-board computer” are mentioned, though Lada didn’t go into more detail.

The sedan does have a few upgrades, too. It offers a heater, upgraded door moldings (thankfully), and the previously mentioned power windows. Buyers can also opt for 15-inch alloy wheels over the 14-inch steel wheels with hubcaps.

The Granta Classic’22 has a 1.6L four-cylinder engine and a five-speed manual transmission. That hasn’t changed over the pre-war model. This version was downgraded to a lower emissions standard since it is missing some crucial parts.

Russia's “anti-sanctions” Lada Granta has no airbag, no anti-lock braking system, no Electronic Stability Control and no seat-belt pretensioners. https://t.co/qQwqVc5sdR

In a recent press release, Lada said the “LADA Granta in the trim level presented will be the most affordable new passenger car on the Russian market.” The company says it was developed with maximization of available parts in mind, excluding the impact of parts no longer available.

The quote at the end of the press release gives a little more information.

“Ensuring the personnel employment of the car plant is one of the top priorities we have. And, of course, we have to further produce the most popular and affordable cars of the Russian market, which do not depend on the imported components’ shortage. To do this, the company jointly with federal and regional authorities are actively involved in the development of competencies of Russian suppliers.”

Last year, Lada made up 21% of new cars sold in Russia. That works out to be about 350,714 vehicles, and the Granta was the second-best seller with 111,430 sales. The Lada Vesta sold 113,698 units, according to Drive. This year, the Lada Granta is the best-selling vehicle, even with a 65% decrease in sales.

Keyword: The Lada Granta Has No Airbags or Radios: Russian Car Safety