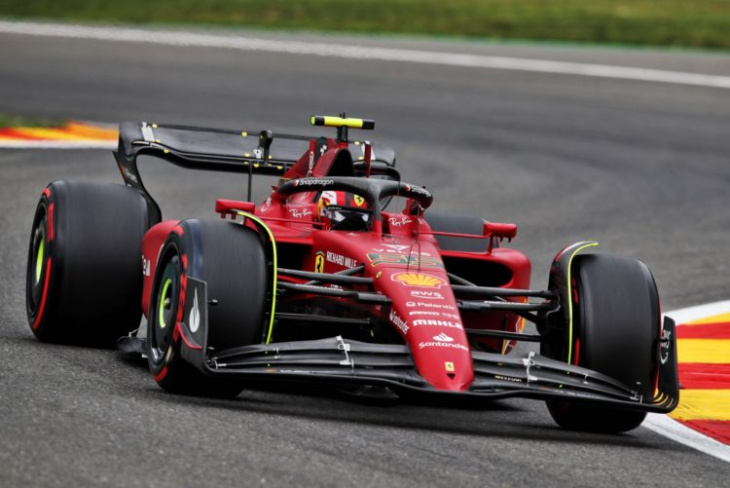 Sainz set a time of 1:46.538s to finish just 0.069s faster than Ferrari team-mate Charles Leclerc as Formula 1 returned to action after the summer break.

Sainz’s benchmark came before a lengthy red flag period, and a subsequent rain shower, which denied drivers the chance to improve.

The stoppage to the session was caused by Haas’ Kevin Magnussen, who came to a halt at the exit of La Source after a power unit problem.

As Magnussen’s car was still live the recovery crew had to wait for Haas’ mechanics for assistance with the removal of the VF-22, eventually leading to a 14-minute suspension.

The session resumed with 11 minutes remaining but as the field began to push on hot laps rain began falling, before swiftly intensifying, prompting the drivers to tip-toe around to the pit lane.

World Champion Max Verstappen was third ahead of a weekend in which he is set to start from the lower half of the grid due to an engine penalty.

Verstappen is one of six drivers – along with Leclerc, Lando Norris, Esteban Ocon, Mick Schumacher and Valtteri Bottas – to take an engine-related sanction.

Bottas wound up with only a couple of installation laps to his name in the session after Alfa Romeo detected a technical problem.

It came on a day in which Alfa Romeo announced that its partnership with Sauber will conclude by the end of the 2023 season.

Sauber has been widely linked to Audi, which finally confirmed on Friday that it will enter Formula 1 in 2026 as a power unit constructor.

AlphaTauri opted to use one of its two rookie sessions in FP1 as Formula 2 racer Liam Lawson stepped into Pierre Gasly’s AT03.

Lawson completed 14 laps and finished slowest of the 19 drivers who recorded a time.