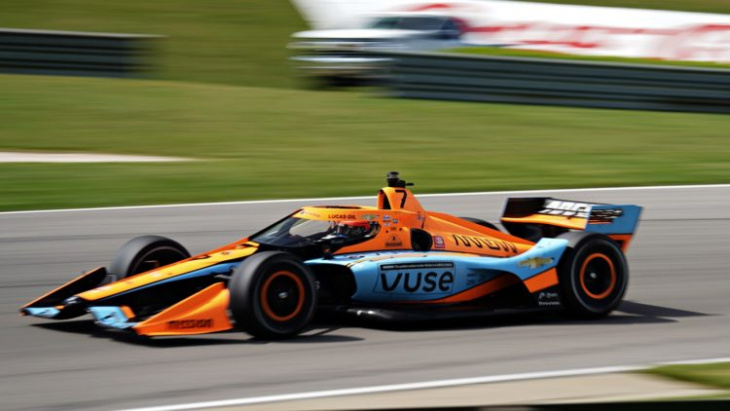 Rosenqvist will stay with AMSP for a third season in 2023. Photo: Kevin Dejewski

Arrow McLaren SP has confirmed that Felix Rosenqvist will remain with the team for next season, ending an uncomfortably long period where it was not known which series he would be driving in.

McLaren first announced that it had extended Rosenqvist’s contract back in June, but it was left open if he would have a place in IndyCar or if he would be moved to the team’s Formula E venture.

Following that was the saga of Alex Palou, who seemed to have a valid contract with both Chip Ganassi Racing and McLaren, which further muddied the waters over who would be driving the #7 entry next season.

When news dropped early Wednesday morning that Palou and Ganassi had come to an agreement to keep the 2021 champion in the #10 entry, that immediately meant that the third AMSP entry was available.

Within minutes of Palou’s announcement, McLaren released a statement confirming that Rosenqvist would be filling that void and remaining in his current seat next season.

Palou to stay with Ganassi as contract dispute resoloved

Has Herta earned the right to enter F1?

“There’s no better way to enter the off-season than with this news,” said Rosenqvist in the release.  “I love this team, and I’m so happy to continue working with all the incredible people I’ve gotten to know over the past two seasons.

“With everything the team has in the pipeline, the continuing relationship with Pato [O’Ward] and the addition of Alex Rossi, we are going to bring our A-game for 2023.  It will be the most exciting season for me so far.  Let it be March already!”

There had been reports that if a definite arrangement was not found within the month, then Rosenqvist would have been allowed to look around for a ride with different teams.

That is not necessary, however, as the 30-year-old will now be allowed to stay with AMSP for a third season, which appeared to be his first choice all along.

The Swede did everything he could to convince his team, and others, that he was a worthy driver during the period of uncertainty, upping his performance by claiming 10 top 10 finishes throughout the season.

He admitted that the decision of where he raced was out of his hands, as other driver decisions needed to be made before his situation was confirmed.

Rosenqvist will look to continue his good form next season, driving alongside Pato O’Ward and his new team-mate Alexander Rossi at the newly-expanded three car team.