Record Market Share For EVs In The USA And Europe

In the US, share was 5.1 percent between January and October 2022. In Europe, more than 1 vehicle out of 10 is electric. 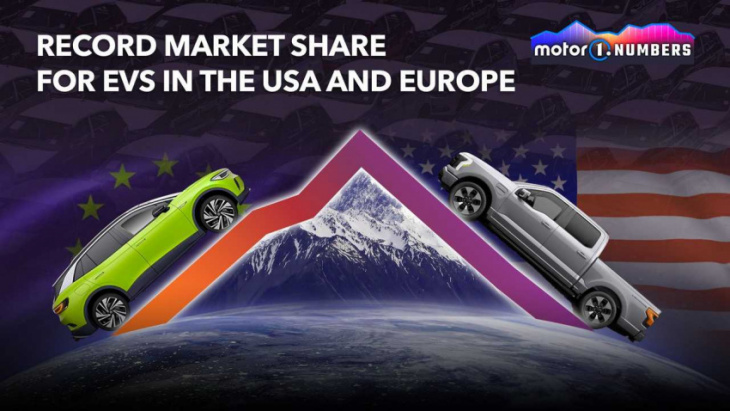 There are very positive sales results for electric cars in the United States and Europe. Interestingly, the latest data released by JATO Dynamics indicates the growth in demand for EVs goes beyond China, the largest market in the world for this type of vehicle.

The market share of Battery Electric Vehicles (BEVs) in the US was 5.1 percent between January and October 2022. While still small compared to the strong presence of combustion engine vehicles, it is remarkable to see the growth compared to previous years. For example, in the first ten months of 2021, BEVs accounted for 2.9 percent of the total market.

Two years earlier, from January-October 2020, EVs were just 1.7 percent of all new vehicle sales. In 2019, BEVs accounted for 1.3 percent of the total market. The popularity of the Tesla Model Y and the good start of electric trucks, such as the GMC Hummer EV and Ford F-150 Lightning, explains part of the rapid growth.

The trend is expected to continue in 2023 with the arrival of more affordable electric SUVs and trucks. Importantly, US consumers mostly buy these vehicles.

More Than 1 In 10 Cars In Europe Are Electric

Despite the progress, the US electric car market lags behind Europe. JATO data covering 23 European markets shows that these vehicles accounted for 12 percent of new car registrations through October 2022. That equates to 1.09 million units out of 9.09 million for the entire market. The total rises to 1.86 million when plug-in hybrids (PHEVs) are added.

Thus, the European total was 1.9 times higher than the American one. The gap has narrowed significantly since 2020. In that year, there were 2.5 EVs registered in Europe for every EV sold in the US. The ratio dropped to 2.4 between January and October 2021. 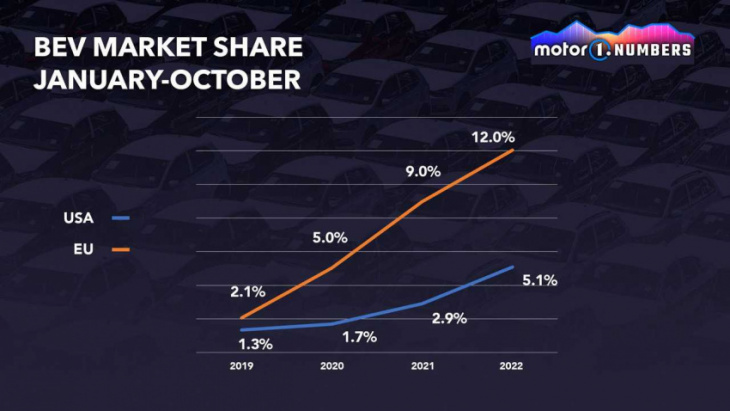 The European boom can be explained by better infrastructure, more choices for consumers, and good offers. Indeed, it is sometimes easier to buy a new electric car than a petrol one. This is due to the shift in priority that OEMs are giving to their products.

Since the problem of semiconductors is likely to remain a supply issue, the few available are used in the most popular models (especially SUVs) or in those that are easier to sell, such as EVs thanks to public incentives. 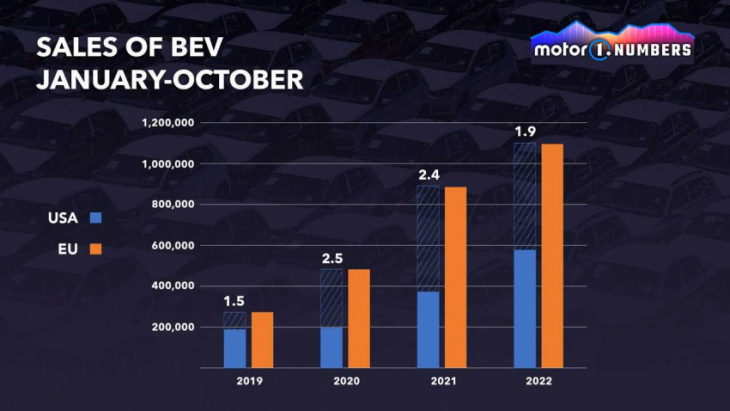 What Will Happen In The Future?

These two markets are expected to see higher numbers for electric vehicles next year. Rapid adoption in some markets is driven by more competitive offerings. More accessible and interesting products will arrive next year.

The introduction of these vehicles includes large trucks and SUVs in the US and small and compact SUVs in Europe. As consumer awareness increases and their willingness to drive electric is bolstered by better cars, it wouldn’t be strange to see double-digit market share for BEVs in the US and over 20 percent in Europe for 2023.

The author of the article, Felipe Munoz, is an Automotive Industry Specialist at JATO Dynamics.

Keyword: Record Market Share For EVs In The USA And Europe