Back in 2015, Domino’s introduced the DXP, a Chevy Spark modified specifically for pizza-delivery duty with a built-in oven. In 2017, we pitted the DXP against the former staple of pizza transportation, a ratty Mitsubishi Eclipse with faded flame decals, and the DXP handily won. But the times they are a-changing, and Domino’s is preparing for the future, announcing that it’ll begin using 2023 Chevy Bolt EVs to deliver pizzas across the country, with more than 100 Domino’s-branded Bolts reaching stores this month. 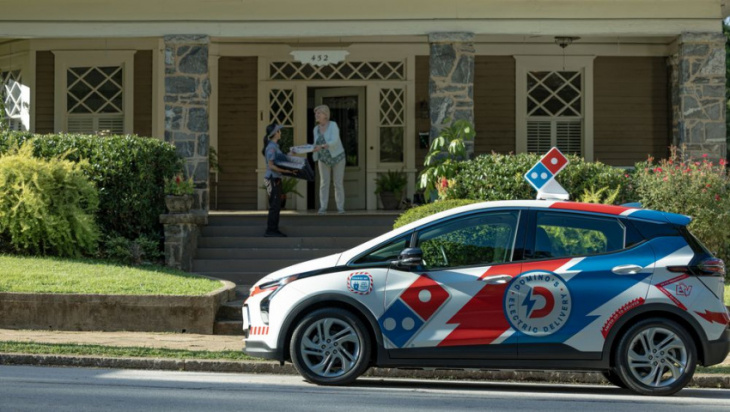 Another 700 Bolts will arrive in the coming months, which Domino’s says will make it the largest electric pizza-delivery fleet in the country, although we’re not sure how much competition there is for that title. With more than 6000 stores in the U.S., not every location will get a Bolt, but it’s a significant step up from the 155 DXPs that were built back in 2015. The Bolt EVs that Domino’s will use appear to have ditched the built-in oven from the DXP, reducing costs and complexity—converting the Spark into a DXP added around $9000 to the price.

More on the Bolt

Along with eliminating tailpipe emissions, Domino’s anticipates the major benefits being the lower average maintenance costs and not having to shell out for expensive gas. Domino’s says it expects the battery life to potentially last for “days of deliveries,” with the Bolt EV achieving a 259-mile range estimate from the EPA. Domino’s also hopes the fleet vehicles will bring in more delivery drivers who don’t own their own car, as many locations still require drivers to provide their own transportation.

The Bolt EV features a quiet and comfortable cabin—hopefully leading to happier, more relaxed drivers—and the 200 horsepower and 266 pound-feet of torque make the electric hatchback feel zippy around town, so the time between ordering your pizza and shoveling it down your esophagus should be reduced. That sounds like a win-win to us.

For the most dedicated Domino’s fans, the pizza company has created an interactive map to keep track of how many Bolt EVs are in each state, meaning they can calculate the chances the next pizza they order is delivered via electric power.