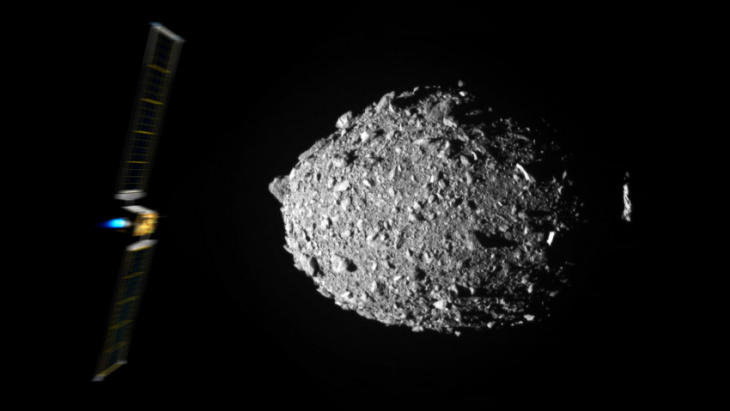 Falcon 9 lifted off from Vandenberg Space Force Base (VSFB) Space Launch Complex 4 (SLC-4) carrying the 630-kilogram (~1400 lb) spacecraft on November 24th, 2021. The rocket performed flawlessly, continuing a streak of successful launches, and boosted DART on its way to a near-Earth asteroid pair.

The goal: slam into the small asteroid moon Dimorphos at an eyewatering speed of 6.3 kilometers per second (14,000 mph / Mach 18). Ten months later, the spacecraft has accomplished exactly that, successfully crashing into a target about 160 meters (530 ft) wide just 17 meters away from a perfect ‘bullseye’ after traveling for ten months and hundreds of millions of kilometers through space. Depending on the results NASA and dozens of other groups will now attempt to glean from ground and space telescopes, the successful impact could be a major leap forward for the field of planetary defense.

Congratulations on successfully crashing a spacecraft into an asteroid!

The main goal of planetary defense is to protect humanity’s home planet from asteroids, a threat that has routinely caused mass-extinction events throughout the multibillion-year history of life on Earth. With the technology to both detect and reach virtually all near-Earth objects (NEOs) more or less at hand, DART is the first attempt to test and verify what would seem to be the easiest and most obvious method of redirecting asteroids: knocking them off course with the spacecraft itself.

Planetary science and the behavior of things in microgravity conditions have a tendency to defy expectations, however, so testing that assumption is essential. The perfect way to do so came to DART Lead Investigator Andy Chang in a burst of mid-exercise inspiration: instead of hitting any odd NEO, a small spacecraft could slam into a tiny asteroid moon of a much larger parent asteroid. Hitting an asteroid moon would mitigate the small but nonzero risk of accidentally redirecting the target towards Earth while also amplifying the results, making them much easier to observe from tens of millions of kilometers away.

Rather than being forced to search for a virtually imperceptible change in a single asteroid’s half-billion-kilometer-long orbit, the results of hitting the right asteroid moon would be much more easily detectable as a change in the moon’s much smaller orbit around its untouched parent asteroid.

The problem is that aside from spectrographic readings that tell scientists the broad strokes of an asteroid’s composition and other telescope images that can make out the rough shape, it’s very difficult to scout the objects without actually visiting them. And given the difficulty, spacecraft have only visited a handful of the virtually countless asteroids of our solar system. Without knowing exactly what a target asteroid’s surface and subsurface are like, it’s hard to predict exactly what a spacecraft impacting that asteroid will do. A looser surface, which is what most visited asteroids appear to have, would be much worse at momentum transfer than a boulder or relatively solid surface of rock.

As an example, as DART rapidly approached and revealed more detailed views of the surface of Didymos and Dimorphos in its final minutes, Chang himself was surprised to see just how rough and boulder-strewn the surface of both asteroids were. Then, after the spacecraft impact, many scientists were also surprised to almost immediately see a massive cloud of dust – easily visible from ground-based telescopes – ejected from Dimorphos.

ATLAS observations of the DART spacecraft impact at Didymos! pic.twitter.com/26IKwB9VSo

Despite the DART spacecraft’s eventful demise, the fun has only just begun on the ground as scientists attempt to solve that riddle (and many others) and begin searching for changes in Dimorphos’ orbit. Data will soon arrive from even larger and more prestigious observatories, including NASA’s space-based Hubble and Webb Space Telescopes. Italian companion cubesat LICIACube, which deployed from DART shortly before impact, will also downlink images it took up close, potentially offering the most detailed view of the impact for years.

Meanwhile, the European Space Agency (ESA) is developing a spacecraft called Hera that will launch in 2024 and attempt to enter orbit around Didymos and Dimorphos as early as late 2026 to examine the aftermath of DART’s last stand in even greater detail.

In the more distant future, particularly if the international science community ultimately concludes that DART did successfully redirect an asteroid (moon), it’s possible that the mission will help to kickstart an entirely new global project and fleet of spacecraft that will stand ready to protect Earth if the need ever truly arises. With a little luck and a modest amount of government funding, humanity may soon be able to entirely eradicate one of the most infamous sources of mass extinction.