McMillin Family Finishes 1 and 2 in Baja 1000; Luke McM Gets Threepeat

Honda is first in motorcycles, Polaris wins in UTVs. 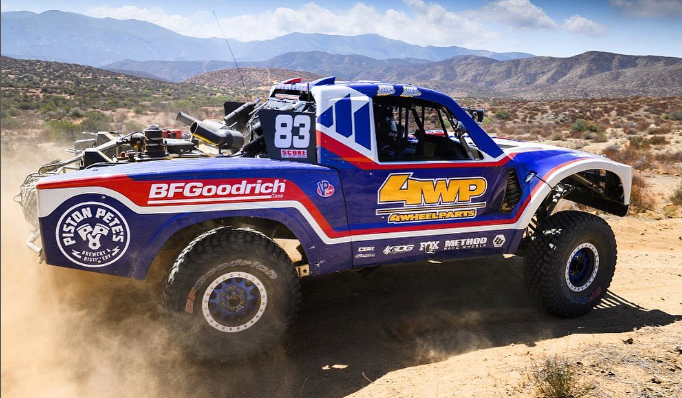 Three generations of McMillins have raced in Baja, but despite 15 overall wins for the family in the storied Baja 1000, they’d never managed a 1-2 finish in the race—until this year. In a dusty but quite thrilling example of sibling rivalry, Luke McMillin beat his older brother Dan McMillin by 18 minutes after 828.25 miles, marking the first time in three generations of McMillin racers that the 1-2 feat had been accomplished.

It was also Luke’s first threepeat, the young racer having won the mighty Mil three times in a row.

“Today is really, really special for the entire team for quite a few reasons,” said Luke, who crossed the line in 16 hours, 37 minutes, and 46 seconds. “Today is our third SCORE Baja 1000 in a row in the No. 83 SCORE Trophy Truck. That’s unbelievable. Only two other people in the history of the SCORE Baja 1000 have done that—Rob MacCachren and Larry Ragland—two legends I have looked up to my entire life.”

Indeed, it was MacCachren who shared driving duties with Luke McMillin in the race, driving the first half of the 828-mile loop course that started and finished in Ensenada. MacCachren won the race in 2014, 2015, and 2016, as well as last year and now this year, the latter two sharing driving duties with Luke. Legendary Larry Ragland did the only other threepeat in 1995, ’96, and ’97.

Luke McMillin took over the truck from co-driver MacCachren at Race Mile 394 and battled brother Dan for the next 434 miles, only passing his bro when Dan had a flat tire. The pair were almost an hour ahead of third-place finisher Larry Roeseler, who drove the whole race by himself for the second year in a row. The 65-year-old Roeseler has a record of his own, winning the race an incredible 18 times overall, 14 on motorcycles, two in Class 1 cars and two in SCORE Trophy Trucks. 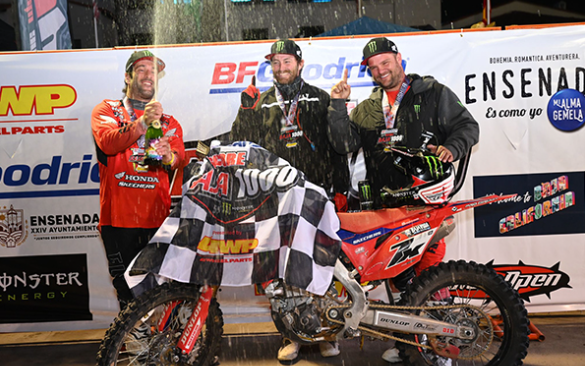 In motorcycles it was the 32nd win for Honda in the Baja 1000, as the SLR Honda CRF450X ridden by Mark Samuels, Justin Morgan, and Kendall Norman crossed the line about two hours behind the winning Trophy Trucks.

“Man, it was a tough course,” Samuels told SCORE at the finish. “It was really rough and actually kind of slower than what we anticipated. We had our hands full at the beginning, but it was a really good race, and by race-mile 340 we were into the lead. From there we just had to bring it home, and we had a great, solid effort the whole way.”

In the increasingly popular UTV class, it was a Polaris that won, finishing in 20 hours 37 minutes. That Polaris RZR Pro R was driven by factory racer Branden Sims and co-driver Eric Borgen, the latter a district sales manager for Polaris. Now that’s believing in your product.

In total, 155 vehicles finished the race.