Listen to This Tiny Hand-Held Rotary Engine Spin to 30,000 RPM 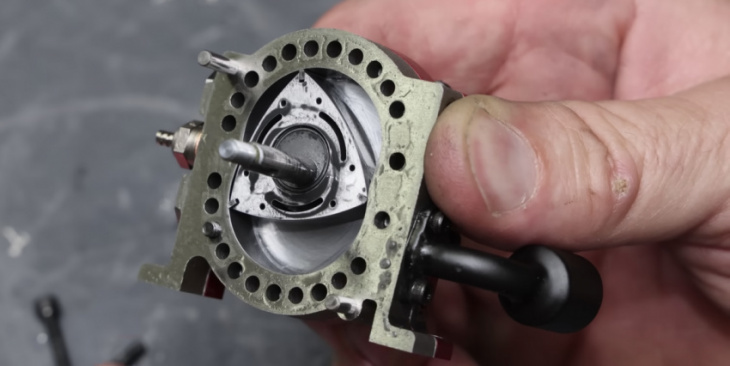 Rotary engines come in all sorts of shapes and sizes. They can be as large as this six-rotor unit powering a Mazda RX-4 drag car in New Zealand, or as small as this 2.4-cc single-rotor engine above. The common theme between the two (and all other rotaries): Lots and lots of revs.

The Warped Perception YouTube channel got ahold of what looks to be the smallest production rotary engine on the planet, Toyan’s RS-S100, for its latest video. It displaces just 0.0024 liters, or 0.14 cubic inches. Rated at just 0.7 hp, it’s perfect for stuff like remote-control cars, boats, or planes.

The channel wanted to see just how high it could get the RS-S100 to rev, so it mounted the engine to a table and connected fuel line and a spark plug before starting it up. After a few minutes of tweaking the engine began to run smoothly, reaching a high of 30,000 rpm before eventually melting the spark plug wire and breaking the tiny exhaust manifold. At least it sounded great.