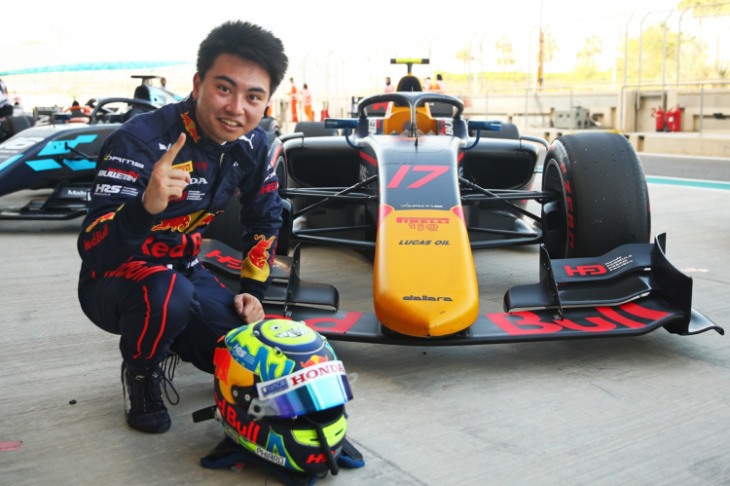 Ayumu Iwasa won the final Feature Race of the 2022 season in a race which saw MP Motorsport secure the teams’ championship as well as Logan Sargeant gaining enough Super License points for his promotion to the Williams F1 Team in 2023.

Felipe Drugovich finished in second place after some late pressure on the leading Iwasa with Liam Lawson completing a double podium in third place.

When the five lights fell to mark the start of the race, Iwasa led a clean start from his team-mate Roy Nissany. The 2022 champion Drugovich had a good start, jumping up to third place.

When the VSC ended a lap later, Théo Pourchaire made the most of the restart to take fourth place from PREMA’s Dennis Hauger.

The leading Iwasa led a DRS train all the way down to sixth place with Logan Sargeant in seventh defending from Jack Doohan on the alternate strategy.

On the hunt for the teams’ championship, Drugovich put Nissany in between himself and ART Grand Prix’s Pourchaire and into second place.

Saturday’s Sprint Race winner Lawson was joined by Dennis Hauger as the first runners on the soft tyres to make a pit stop on lap eight.

The race leader was in the for new tyres on the next lap and re-joined the race in 17th after a smooth stop.

Lawson was the biggest winner of the pit stops, jumping up from a net race position of sixth to third due to his early undercut on the rest of the pack. 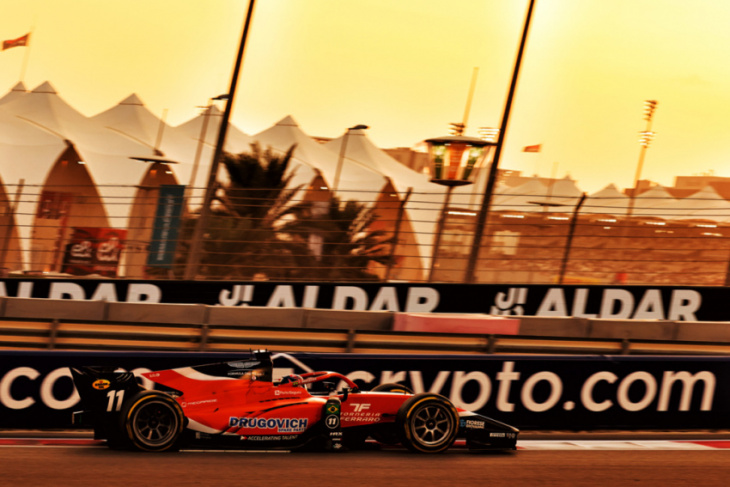 A scary moment for Drugovich saw him nearly career into the back of Iwasa’s DAMS car at the end of the first DRS straight which in turn gave Lawson an opportunity to pass. The attempt was successfully defended by the Brazilian.

Pourchaire got past Hauger at the third time of asking after the Danish driver went wide at turn nine, opening the door for the Frenchman.

After leading the race since the first round of pit stops, Doohan finally crawled into the pits on lap 26 for a set of softs.

Unfortunately, on his return to the track, his front-left tyre came off the Virtuosi Racing car, forcing the Australian to retire.

A Virtual Safety Car was deployed for the second time in the race to recover the stricken tyre from the circuit.

After a frustrating first 30 laps behind the rear wing of Nissany, Sargeant finally got past the Israeli as his future in Formula 1 with Williams in 2023 was in the bag.

There was more heartbreak for Pourchaire this season as he slowed down and pulled up with just a few laps remaining.

Drugovich put Iwasa under immense pressure in the closing laps and nearly overtook him a few times on the outside of turn nine but due to the hard but fair defending from the Japanese driver, there was no hope for the Brazilian.