Rain, lightning made for a long night for Cup contenders. 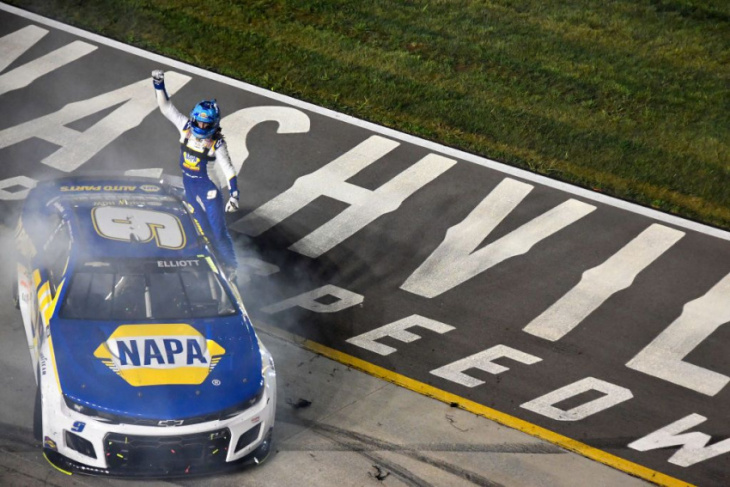 In a race twice delayed by lightning, Chase Elliott stole the thunder from a contingent of Toyota drivers who showed early dominance.

After a late caution slowed the action in Sunday’s Ally 400, Elliott remained on the track and led the field to a restart with four laps left at Nashville Superspeedway.

Elliott pulled away from runner-up Kurt Busch and powered his No. 9 Hendrick Motorsports Chevrolet across the finish line with a margin of .551 seconds.

In fashioning his second NASCAR Cup Series victory of the season, his first at Nashville and the 15th of his career, Elliott overcame a long pit stop on Lap 120 that dropped him to 25th in the running order. 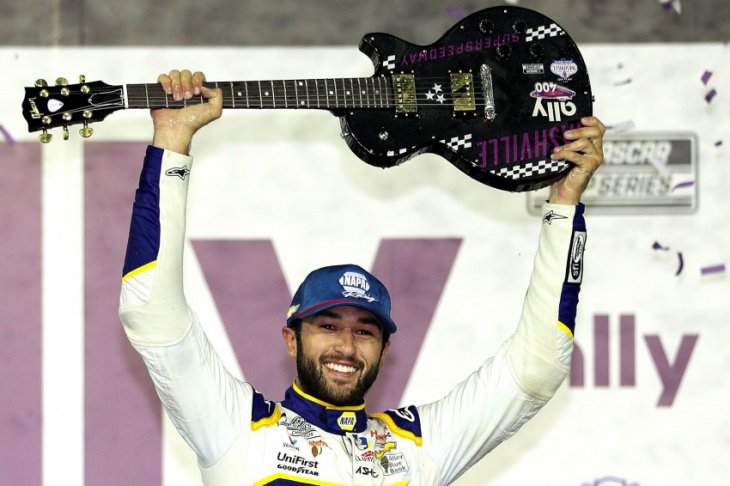 Chase Elliott’s win in Nashville was the 15th of his NASCAR Cup Series career.

“Getting a win is always huge. To do it in a really cool city like Nashville is even better. I’m looking forward to that guitar (trophy).”

It might be more accurate to say that the Toyota drivers beat themselves by pitting during the 10th and final caution on Lap 291, the result of a blown engine in Josh Bilicki’s Chevrolet.

While Elliott and Kurt Busch stayed out under caution, along with eight other drivers, Kyle Busch, Truex and Hamlin all came to pit road for tires. Of the three, only Hamlin advanced over the final four laps, finishing sixth behind Ryan Blaney, Kyle Larson and Ross Chastain.

Kyle Busch and Truex ran afoul of heavy traffic on the final lap and came home 21st and 22nd, respectively. 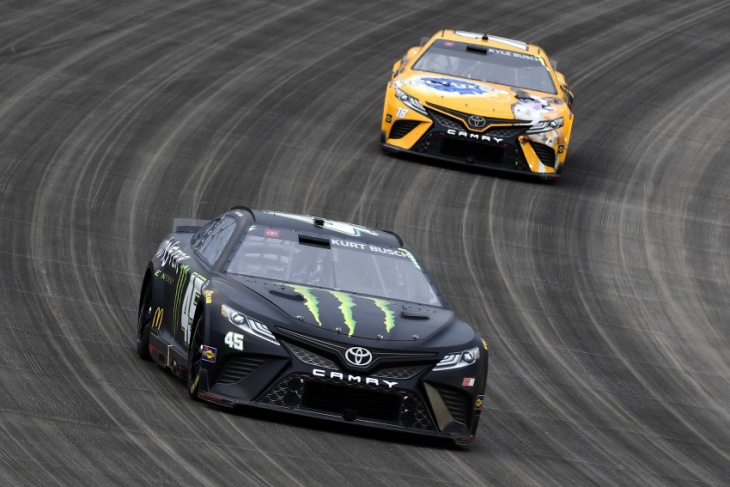 Hamlin, who led a race-high 114 laps, was out front for the first 41 circuits before lightning halted the action for one hour 27 seconds. After the resumption and two more cautions, Truex passed Hamlin for the lead on lap 66 and help through the end of Stage 1.

Truex, who led six times for 82 laps, also won the second stage, but Elliott’s car came to life in the final third of the race. Elliott had a one-second lead over Kyle Busch, with Hamlin and Truex trailing in third and fourth place, when Bilicki’s engine failure caused the final caution with nine laps remaining.

Kurt Busch’s only regret about his runner-up finish was not being more aggressive on the final restart.

“I wanted to throw some fenders, but I didn’t get the job done,” said the driver of the No. 45 23XI Racing Toyota. “Everybody will be smiling, but I let them down. I should have come up with a better plan.

“We were going to stay out no matter what, and I needed to start throwing fenders to move people around. I didn’t get after it, and I made too many mistakes and didn’t stick with our strength. I’m not going to say what our strength was, but we did a lot of things good.

“We didn’t have one exceptional item. We’re second with our Toyota Camry. I want to do it over, but you don’t get those at this elite level and Chase got the job done.”

Keyword: How Chase Elliott Won on a Marathon NASCAR Cup Night at Nashville