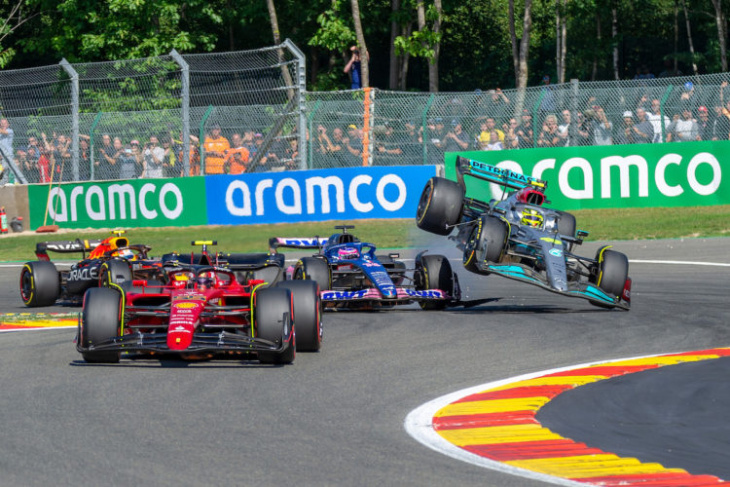 Hamilton attempted to overtake Alonso around the outside of Turn 7 at Spa-Francorchamps as they battled for second place on the opening lap.

However, contact was made between the two, which resulted in Hamilton’s first retirement of the 2022 Formula 1 season.

“I had a really good tow on Fernando and did a move down the outside,” Hamilton said. “I got up alongside him and a little bit ahead of him, thought I left enough room for him and I didn’t, and I paid the price for it. So it’s my fault, and just sorry to my team really.”

Although Hamilton retired, Alonso was able to continue in the grand prix with no significant damage and eventually classified in fifth.

“What an idiot,” Alonso commented on his team radio shortly after the shunt. “Closing the door from the outside.

“I mean, we had a mega start but this guy only knows how to drive and start in first.”

Hamilton was informed post-race of Alonso’s comments, to which he replied: “I don’t really have a response to it.

“I know that how things feel in the heat of the moment, but it’s nice to know how he feels about me.

“And so I better it’s better that it’s out in the open how he feels. And like I said it wasn’t intentional. And I take responsibility for that’s what adults do. So it is what it is.”

When asked if he would seek out Alonso to talk about the incident, Hamilton asserted: “No, no, I mean, I would have until I heard what he said.”

Hamilton’s car was pitched into a vertical angle as he was launched into the air, which resulted in a hard hit when he returned to the ground.

“I almost broke my back coming down,” he said. “So it’s a big, big hit. I remember just looking at the ground.

“So it was quite high. It was definitely high up. I’m grateful to be still alive and in shape.”

Keyword: Hamilton: It’s nice to know how Alonso feels about me