Get a Personalized Video Greeting From Tony Stewart, Richard Petty, Romain Grosjean, and Other Racing Heroes

An app called Cameo can line up these and many other celebrities.

Looking for the perfect holiday gift? Send your NASCAR Dad a personalized greeting from Tony Stewart, Richard Petty, or any number of other drivers via the Cameo app. It’s easy—just call up the app, type in “Racing” in the search bar, pick your driver, pay your money, and within 24 hours (usually) the greeting appears in your email and your loved one is (usually) in tears of amazement and joy to find his or her hero talking (more or less, via video) directly to them, including interesting tidbits only you and they would know, so you know it’s personalized and straight from the source.

It’s a fun and frolicsome Friday you can spend wandering through the list of celebrities—“Some that you recognize, some that you’ve hardly even heard of”—and they’re all willing to say hello directly to you or your special loved one for entirely reasonable fees. 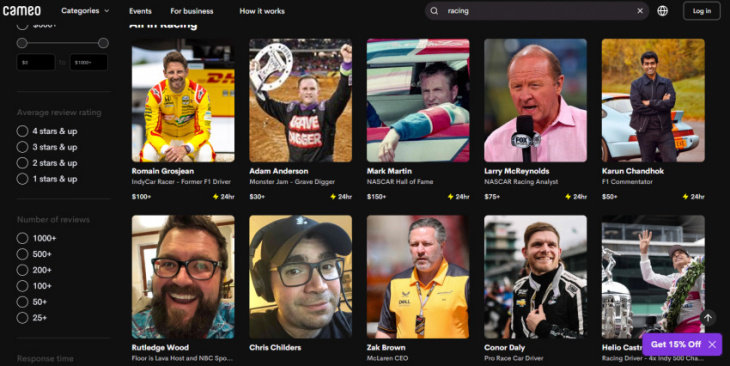 Just some of the stars on Cameo.

Cameo is like a celebrity stock exchange, so the above prices might have changed by the time you look them up to request your celebrity racer greeting.

When going to to the site and picking a personality, you fill out the request form and add all the relevant details (“It’s for my Uncle Skeezix who saw you race at Tallahoochee in ’64 and has followed you ever since!”), then pay the price, and send it in. Your celebrity can accept or reject your request (to filter out the weirdos), but most will get back to you within a day. When it comes in, be sure and record the look of amazement and joy on the face of your fan as they watch the video. It’s always fun. Several Autoweek staffers have bought Cameo video greetings for friends and family. I might buy Mike Pryson a Richard Petty greeting for Christmas, but at $250+ he might be getting a Capps video, or some guy from the Goody’s Headache Powder Circle Track 200.

I talked to one Cameo personality at SEMA, Rutledge Wood. He sees lots of good in it for a number of different reasons.

“For me, I’m kind of lucky because I’ve had that career that’s like a Swiss army knife, covering NASCAR, doing (children’s television game show) ‘Floor Is Lava,’ doing cooking shows, working for Toyota for 12 years, (hosting Top Gear). I’ve done all these different things. What I really love is that it lets you connect with fans for all these different reasons. My favorites are the ones who say, ‘Hey, my son’s having a hard time in school. Can you give him some pointers?’ Or, ‘I have a feeling you were always different. I’ve got a kid that’s a little different. Can you talk to them about what helped you the most?’ I really love how it connects with people. I’m totally on the same page. I get that it’s weird. But most of the stuff we do today is pretty weird if you take a step back. I find a lot of joy in what you can do if you can make somebody else smile.”

So, see? They get as much out of it as we do. It’s meaningful and fun. Other celebs abound on Cameo, from A-listers like Snoop Dogg to lots and lots of D- to Z-listers. Go on the site and poke around. Then make someone happy this Christmas.