Football cars: the best and worst motors inspired by the beautiful game

Not every manufacturer is a winner when using football to sell cars. We pick the best and worst football-themed motors 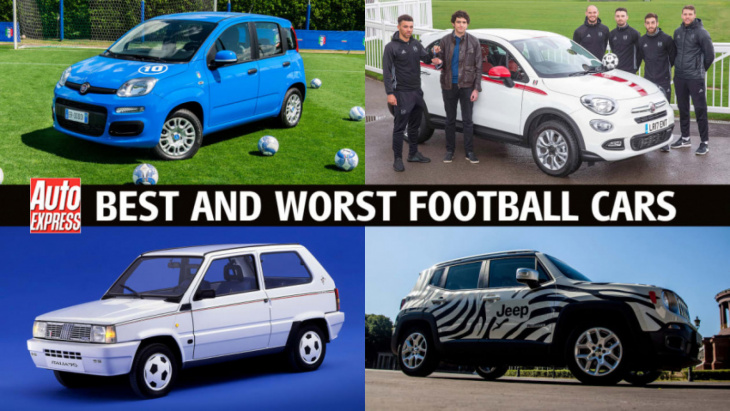 It’s unlikely to have escaped your notice that football’s World Cup is currently taking place. A heavy schedule of matches and TV coverage will ensure events in Qatar dominate the conversation worldwide.

Over the years, this global obsession with the beautiful game has presented opportunities for car makers, who have attempted to tap into its popularity with a special edition – some with more success than others. Here are the good, the bad and the ugly of football-themed cars. 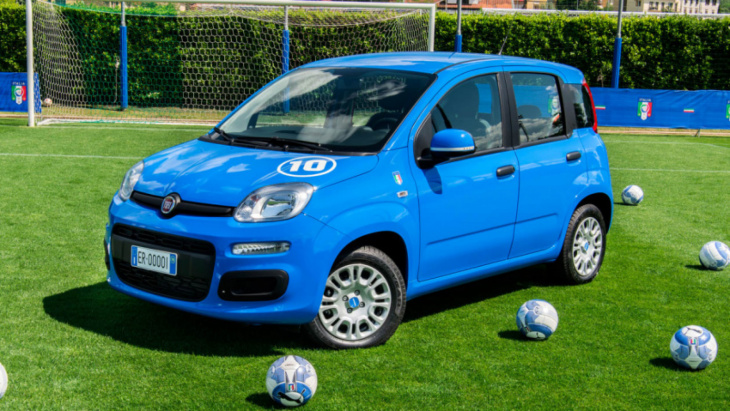 Fiat was at it in 2016, when, prior to the Euros, it showed its backing for the Italian team with this striking blue version of the Panda called, appropriately enough, the Pandazzurri.

Among the design highlights were seatbelts in the colours of the Italian flag, the Italian Football Federation’s logo on the side of the car and special stickers in tribute to legends Gianluigi Buffon (number 1) and Andrea Pirlo (number 21), plus the many playmakers who have starred for the Azzurri over the years (number 10).

Curiously, this most Italian Panda was also sold in Belgium and the Netherlands, too. 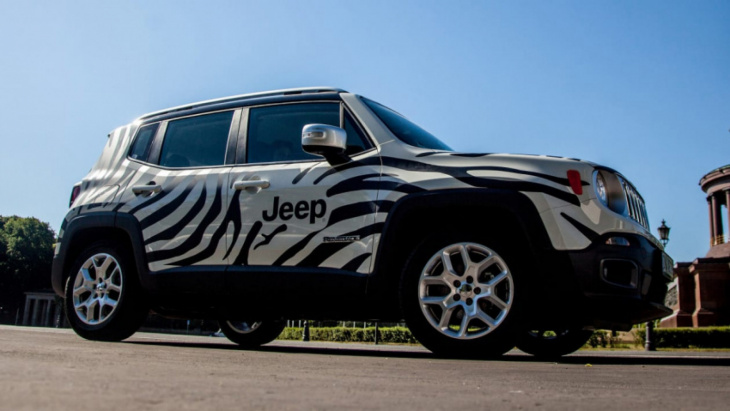 Branding a car with a football club’s colours can be a dangerous business, as is illustrated by some of the cars below. But Jeep certainly hit the target with this 2015 version of the Renegade, which was built to celebrate Juventus reaching the Champions League final.

Turin’s Old Lady is renowned the world old over for its kit’s black and white vertical stripes, but this zebra interpretation put a clever new spin on the colour scheme. While a fleet of zebra Renegades made quite an impression on the streets of Berlin prior to the final, Juventus were less convincing on the pitch, ultimately losing 3-1 to Barcelona. 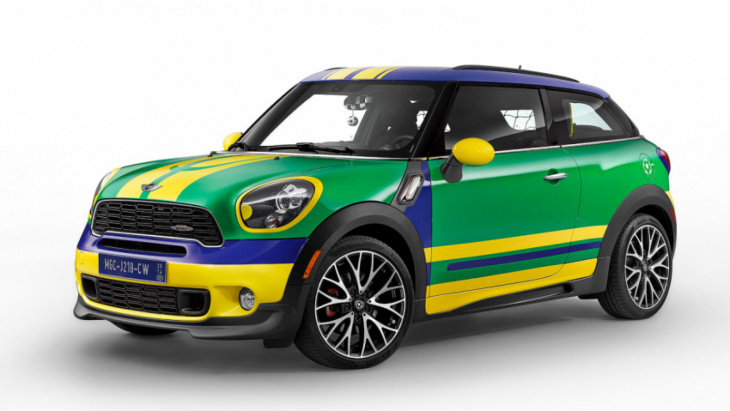 While the name, in football manager parlance, was frankly unbelievable, the Paceman GoalCooper was a Brazilian-themed homage to the game to coincide with the 2014 World Cup (although BMW had no official affiliation with the FIFA tournament, so the press materials made no reference to it).

The Paceman was said to be fully equipped for training thanks to an AstroTurf-clad boot and miniature table football set, but the date of the launch was most telling – 1 April 2014. Yes, this was an elaborate April Fool’s gag. 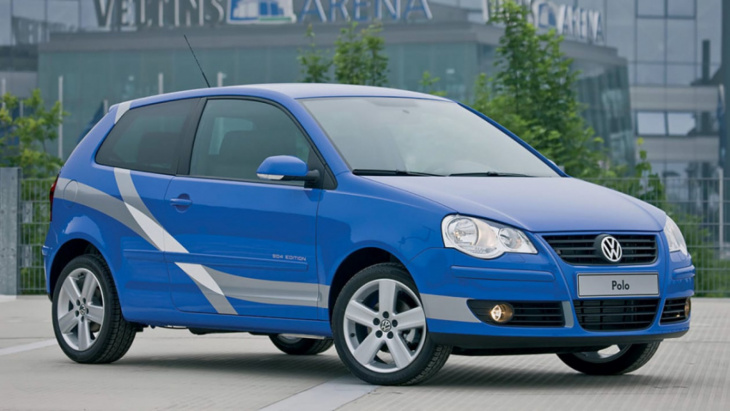 Is anything in football more contemptible than the fan who supports more than one team? The motoring equivalent has to be this Polo. In 2008, a special edition emerged in Germany called the S04. Painted in blue and white, it was a tribute to Schalke 04, the club that launched the careers of World Cup winners Mesut Ozil and Manuel Neuer, among others.

But VW was also wooing Werder Bremen fans with another Polo special. It came in white, black and silver, and was distinguished by a rendering of the club’s badge over the C-pillars, with more logos inside. 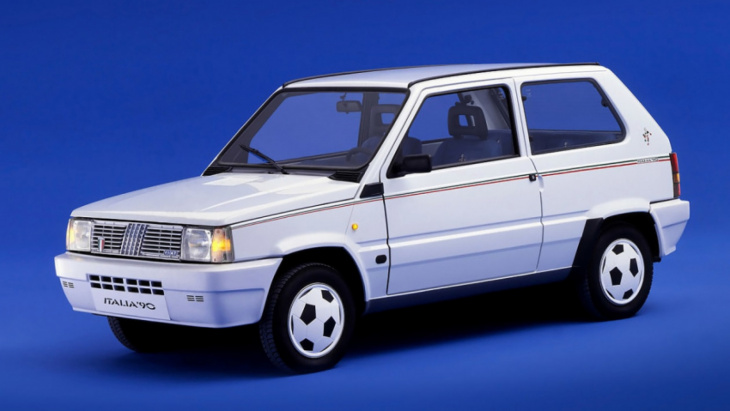 Who can forget the iconic World Cup of 1990? Pavarotti. Ireland’s heroics. Roger Milla. Toto Schillaci. And, of course, England’s semi-final heartbreak. With all this going on, the Fiat Panda Italia 90 probably passed you by.

Based on a standard white 750cc Panda, it featured red and green stripes to reflect the Italian flag, a custom interior fabric called Azzurri blue – in tribute to the colour of the national team – and unique football-styled wheel covers. Rather surprisingly, the model was available across Europe, while an Italia 90 convertible was showcased at matches. Cute enough to make Gazza cry. 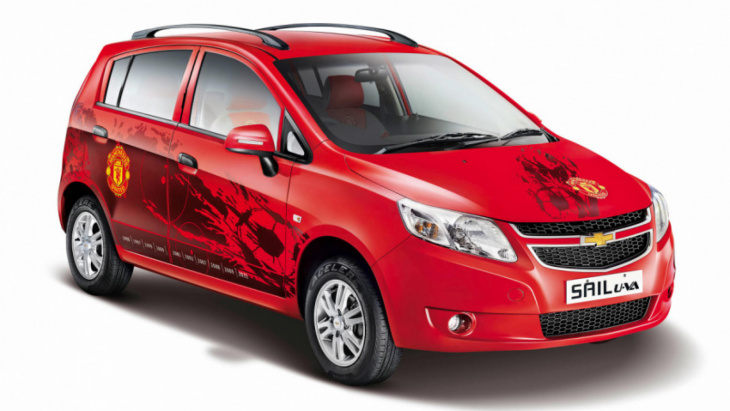 While Old Trafford is considered by Man United fans as the Theatre of Dreams, we’d wager few petrolheads spent much time dreaming about this limited-edition Chevrolet Sail that was produced for the Indian market (and accompanied by a similar version of the Beat hatchback).

Conceived off the back of Chevy’s sponsorship deal with United and apparently produced in response to “strong demand”, the models featured gaudy decals and an array of extra kit in tribute to some of the legends who’d worn the red shirt. In terms of desirability, though, they were more Eric Djemba-Djemba than Eric Cantona.

While Opel’s Corsa Football Championship Edition couldn’t boast a snappy name, it did mark Germany’s qualification for the South Africa finals in 2010 with a vaguely stylish white paintjob complemented by stripes in the colours of the German flag running from the bonnet to the rear quarter window. Clearly it proved motivational, because this was the World Cup in which Germany went on to thrash England 4-1 in Bloemfontein. 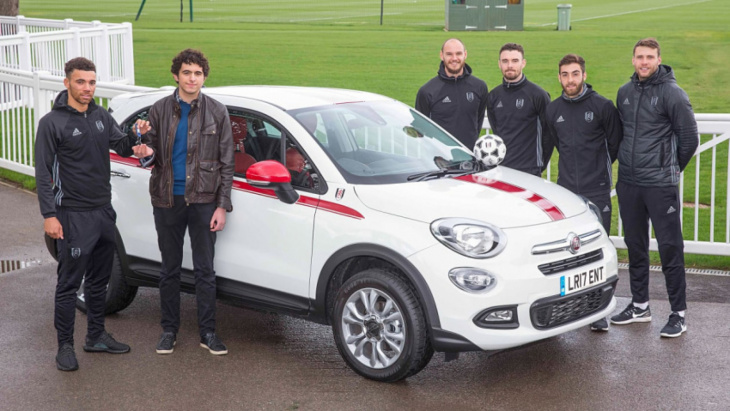 This limited edition from 2017 truly was limited in its availability, because just 15 were made and were only offered to season-ticket holders. The Fiat 500X special came through a tie-up with retailer Fiat Chrysler Motor Village UK and – appropriately enough, given that Fulham once inexplicably had a statue of Michael Jackson outside their stadium – was based on the 500X Pop Star.

So, was the 500X a Thriller or just plain Bad? You can decide, but an exclusive white, black and red paint finish and unique FFC badging meant other road users were left in no doubt which team the owners supported. 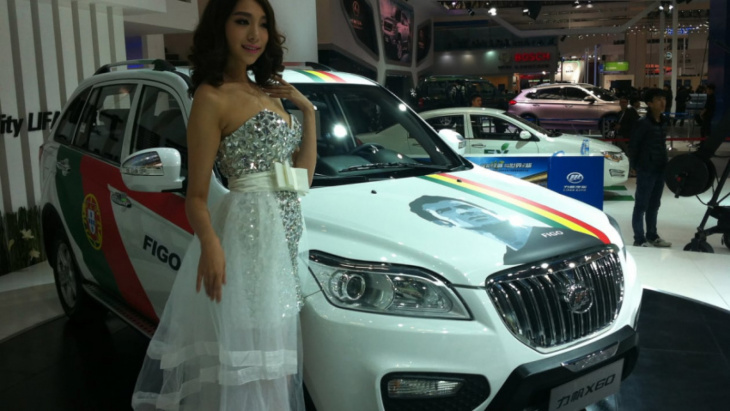 Never heard of the Lifan X60? You’re probably not alone. It’s a derivative compact crossover from China that’s generally as memorable as a 0-0 draw in the rain at Stoke. But the X60 did cause a stir at the 2014 Beijing Auto Show when Lifan unveiled a version emblazoned with an image of Portuguese star Luis Figo, who was in attendance and, frankly, looked slightly puzzled by proceedings.

Figo, a Ballon D’or winner who played for both Barcelona and Real Madrid, had been engaged as a brand ambassador in an attempt to raise Lifan’s global profile.

One of the most prominent tie-ups between cars and football was this soccer-themed foray into motorsport. The premise was simple: a race series where the team sponsorship was provided by football clubs.

A number of top names were attracted, including Liverpool, AC Milan, Rangers, Porto and Sevilla. The racing cars were branded in the clubs’ colours, but although the format had promise, particularly for a TV audience, it never really caught on and in 2011, four years after its arrival, it came to a low-key end.

Keyword: Football cars: the best and worst motors inspired by the beautiful game