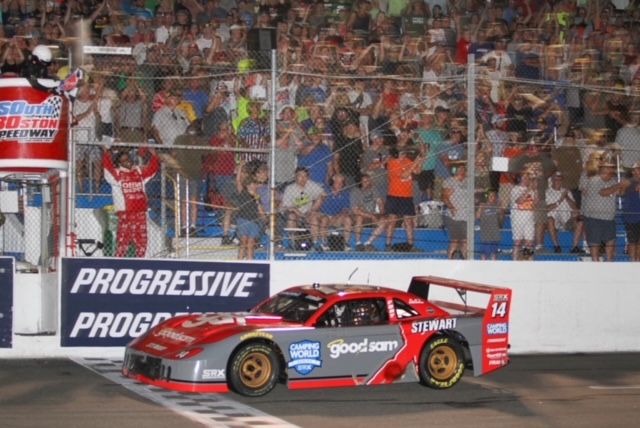 After getting ticked off due to contact with Ernie Francis Jr. in the second heat race of the night, a still fuming Tony Stewart channeled his anger into good use in the main event of Saturday’s Camping World Superstar Racing Experience (SRX) race at Virginia’s South Boston Speedway, holding off a late-race surge by Greg Biffle to take the win.

“Seeing these fans cheering when we got the lead every time, that’s what kept the motivation going – not like I need much motivation,” the 51-year-old NASCAR Hall of Famer told CBS Sports. “But when you have fans at South Boston cheering like that every time you get the lead, by God, you’re not going to let them down.”

It was a triumphant return to South Boston for Stewart, who had raced there once before roughly 20 or so years ago.

“I haven’t been to South Boston since I ran a midget clear back in 2000, ‘01 or ’02 or something like that,” Stewart told CBS Sports. “I couldn’t remember the characteristics of what this track does when it cools off, but I was hoping it was going to tighten up and it did a little bit, not as much as we needed.”

Biffle kept closing on Stewart in the final three laps, but Stewart did what he needed to do to take the win – even though Stewart admitted he made a mistake with his race pace.

“I was worried we’d get a caution late, so I tried to take care of him there,” Stewart said of Biffle to CBS Sports. “I think backing my pace off actually hurt me rather than helping me. I thought I was trying to take care of it and I think I was making some problems a little worse by not running as hard as I was earlier than that.”

Nonetheless, there was no late caution and Stewart hung on to take the win.

“I don’t know what was going on with Hunter-Reay,” Tracy said. “He and (Peyton) Sellers were just beating on each other. Hunter-Reay went completely sideways, I tried to get around him, we got into each other. I think my inside front tire hit his tailpipe, it cut my tire down and it just shot me into the wall.

“I got beat up tonight and I was just trying to do my best.”

In addition to the contact Stewart had with Francis and Tracy had with Hunter-Reay in the second heat race (see sidebar), Hunter-Reay also ticked off normally mild-mannered Michael Waltrip in the main event.

With just over 30 laps left in the 100-lap feature, Waltrip’s car was knocked out after making heavy contact with Hunter-Reay.

“I got dumped halfway down the back, he got into me and never let me go,” Waltrip said of Hunter-Reay to CBS Sports. “I just don’t understand that. One hit, that’s cool, and then he just keeps into me. He’s going to hear from Uncle Mike. We’re not having a beer together, A. But B, that’s just not right. That is not how you race.”

Waltrip extracted some revenge when he bounced back into Hunter-Reay under the ensuing caution before heading to the pits, his night done.

“I didn’t want to tear up his car, but I wanted to send a message. Hopefully, message received,” Waltrip said. “But I’m going to wait around and have a chat with him.”