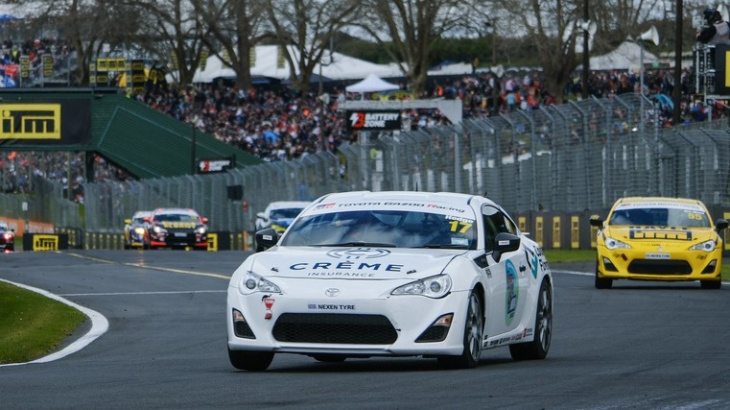 Former champion Callum Hedge and Pukekohe veteran Christina Orr-West put on a fantastic show as the Toyota 86 category ran its last race at the Pukekohe Park circuit, and it was Hedge who ultimately prevailed to take the final TR86 win at the track.

With a grid formed on points scored in the two previous races on Saturday, it was Hedge on pole position and he made the perfect getaway to lead into the first turn.

Only Orr-West had an answer for his pace and, having battled to second place in the opening laps, she set about catching Hedge with a barnstormer of a drive.

Only a tiny error at the hairpin with a lap to go robbed her of a shot at the lead, but it was smiles all around after a fantastic weekend of racing.

“It’s a great way to finish off the weekend at a place that is very special indeed to me,” says Hedge. “I’ve always loved the challenges here and we’ve had a great weekend fundraising and enjoying our racing. I don’t really have the words to describe how I felt coming over that mountain for the final time.”

Orr-West, who came through from the second row, was delighted with second after a solid weekend on the pace at a track where she has completed literally thousands of laps

She says: “I thought I had fluffed my start, but Dion Pitt was the perfect gentleman going into turn two and I managed to get out ahead.

“After that I just went as hard as I could and did everything I could to catch Callum under braking for the chicane. It was on-the-limit stuff and I managed to reduce the gap to him significantly.

“I maybe had a chance to slipstream past him. But I made a small mistake under braking near the end and just couldn’t get close. I’m pleased to get second though, especially at the circuit’s final meeting. An amazing experience.”

With the Pukekohe event being a non-championship round, those lining up a shot at the 2023 championship have a few months to get themselves and their cars ready. It all begins at Highlands in January but, for now, thanks for the memories Pukekohe.