Even the Department of Homeland Security is adopting EVs, check out their new fleet 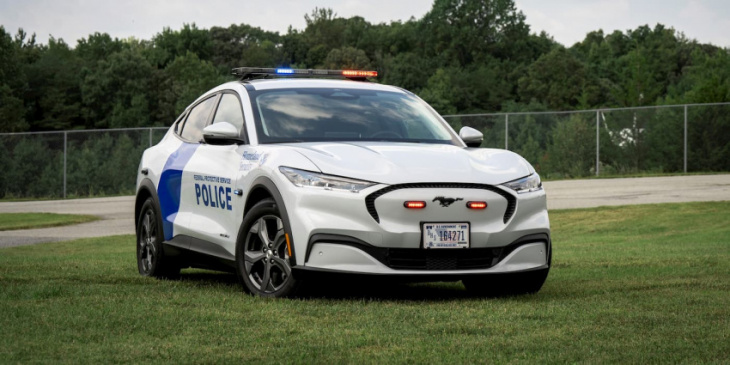 It’s probably never good if the Department of Homeland Security (DHS) shows up at your door. However, DHS revealed its next vehicle to show up will most likely be an electric one, as the agency says it is transitioning from internal combustion engines to EVs.

The Department of Homeland Security said in a press release earlier this week it would be unveiling new battery electric vehicles specifically designed for law enforcement duties.

Although the release claims it’s the “first federal agency to debut a battery electric vehicle (BEV),” as Electrek reported in August, the FBI was spotted using Ford’s Mustang Mach-E (which looks ready to fight crime) for law enforcement activities.

The transition is part of a broader global trend as federal and local agencies convert to electric fleets to reduce emissions and save costs in the long run.

For example, the LA and Denver Police Departments have been using Tesla S models for several years. Meanwhile, many countries outside the US federal government have adopted electric vehicles for their police fleets, including Belgium, Luxembourg, Switzerland, Thailand, the UK, and more.

For that to happen, the federal government must do its part by converting its fleets to electric. It looks like the Department of Homeland Security will follow in the FBI’s footsteps as it debuts the agency’s new EVs for law enforcement officers.

The Department of Homeland Security (DHS) says it’s “leading the charge among federal agencies” by converting its fleet to EVs.

The agency says the Ford Mustang Mach-E will be the first installment of many EVs across its vast law enforcement operations. DHS deputy secretary John Tien stated:

As the Nation’s third largest federal agency and largest law enforcement agency, DHS has an inventory of more than 50,000 vehicles, with law enforcement vehicles making up 60 percent of its fleet. As we ramp up EV adoption, we are excited to see how this and other EVs perform for our mission.

The DHS has additional plans to reduce emissions, building upon its mission of establishing a sustainable future. “Tex” Alles, serving as acting secretary for management at DHS, added:

DHS is proactively seeking to reduce greenhouse gas emissions, EVs have the potential to significantly improve federal fleet efficiency and reduce vehicle operation and maintenance costs. DHS is also looking to create climate-resilient facilities and infrastructure, and to continue transitioning the DHS vehicle fleet towards electrification in the years to come.

This past April, DHS presented a Ford Mustang Mach-E with lights and sirens that fit Federal Protective Service Standards.

The agency is currently testing the Mach-E EVs to make sure they can withstand the work, including:

Furthermore, the Department of Homeland Security is gathering data as law enforcement officers complete their daily tasks for performance benchmarking.

Keyword: Even the Department of Homeland Security is adopting EVs, check out their new fleet