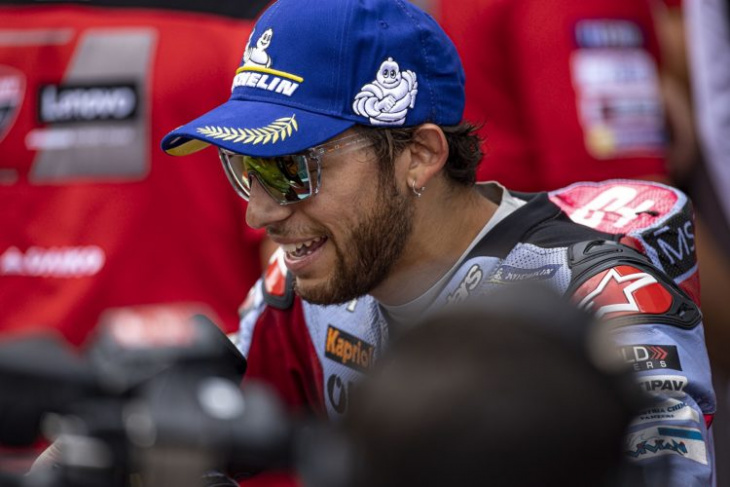 After much deliberation Ducati’s MotoGP outfit has elected to sign Enea Bastianini to join Francesco Bagnaia in 2023, with Jorge Martin to remain at Pramac alongside Johann Zarco.

The Italian manufacturer had been evaluating which of its young guns to take into the official team since deciding to demote current factory rider Jack Miller earlier this year, with a Pramac spot all-but-guaranteed to whoever missed out after the Aussie decided to switch to KTM beyond this year.

Martin was thought to be an early favourite for the berth, though Bastianini’s breakout campaign – in which he has scored three wins on a year-old Desmosedici run by Gresini – has impressed Ducati enough for him to receive the nod over Martin in what will be a two-year deal.

The 2020 Moto2 world champion enthused that he was “thrilled to be able to wear the colours of Ducati” from 2023, admitting it is his “dream” to be able to ride for Ducati’s factory squad.

“I am thrilled to be able to wear the colours of the official Ducati team starting next year,” said Bastianini.

Marini: ‘I can fight for the podium in every race’

“It was my dream, and now it has come true.

“In these two years in MotoGP, I have learned and grown a lot, and I believe that I can only improve with the engineers and men of the Ducati Lenovo Team!

“Still, I also want to thank Nadia (Padovani, Gresini team owner) and the whole Gresini team for the great support I have received from them during this wonderful season together.

“I will try to close out this 2022 in the best possible way before tackling my new adventure as a factory Ducati rider with total commitment and the right team spirit.”

Martin thus will remain at current team Pramac for 2023 alongside current team-mate Zarco, the Italian team confirming the news shortly after Bastianini’s factory appointment being made known.

Both Martin and Zarco will continue to receive full-factory spec Desmosedici’s like they have this year, the only differences between them the colour scheme and the team running them.

Bastianini currently sits as the higher of the two in the riders standings in sixth with seven races still to run this year, his three successes helping to lift him a commanding 31 markers and three places ahead of Martin.

Gresini will replace the out-going Bastianini with LCR Honda refugee Alex Marquez for next season, the Spaniard joining Fabio Di Gianantonio who has been kept on for a second premier class campaign.