► Flagship SUV from DS gets a makeover► Plug-in gets 355bhp
► More posh than performance?

It’s taken a while for DS Automobiles to find its feet since becoming a standalone brand in 2009, though it has yet to give us anything truly as innovative as the original Citroen DS it takes its name from.

Now the DS 7 range-topper has received a shakeup, with enhanced styling to make it stand out a bit more. As the brand’s flagship SUV, it fancies itself as a Gallic alternative to its popular premium German rivals such as the Audi Q5 and BMW X3.

As mid-life facelifts go, quite a bit has changed in the DS 7, starting with the name, which drops the ‘Crossback’ part of the outgoing model. A more chiselled appearance up front includes new LED headlights that link with a redesigned and enlarged grille. The most distinctive elements are what DS calls the ‘light veil’. These snazzy daytime running lights appear to shine through the front bumper. 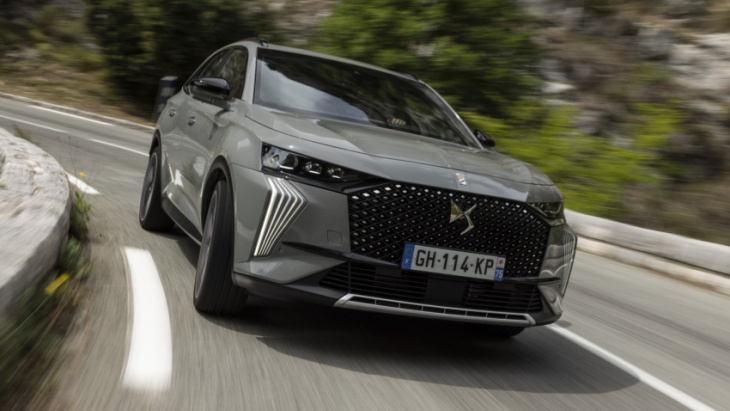 At the rear, there are fewer nips and tucks; the headline bits include slimmer taillights that carry quite an intricate scale-like pattern and the replacement of the brand’s logo with the DS Automobiles wordmark — something that all car makers seem to be doing these days. 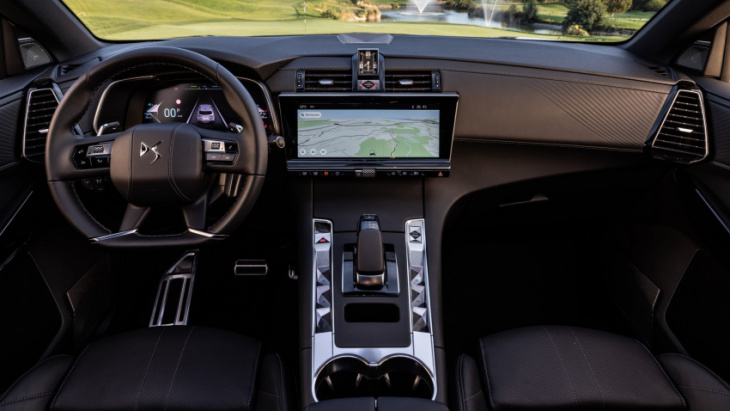 You get a bit of theatre inside – especially with higher-spec Opera versions – which sets it apart from the rest of the Stellantis crowd. A fully digital instrument display may be de rigueur, but the 12-inch touchscreen looks decent, and the infotainment system is easy enough to use. There’s no lack of nice materials, and how it’s all laid out is pleasingly different to other premium rivals, too. Comfort is clearly the priority here; even those in the rear have plenty of room. As before, it’s a five-seat layout with a 555-litre boot behind.

What engines can I have?

While DS is transitioning towards being a fully electric brand, there won’t be an electric version of the DS 7 on the current platform. However, plug-in hybrids make up most of the DS 7 offering. These all use the same 14.2kWh battery to provide WLTP electric driving ranges of between 36 and 43 miles depending on model. They should be good for at least 30 miles in real-world driving, so you’ll need to plug in regularly to reduce your visits to the fuel pump. Good thing that the battery can be fully charged in 1 hour 45 minutes from a 7kW domestic wallbox.

All three PHEV options (or E-Tense, as DS calls them) use a 1.6-litre turbocharged four-cylinder petrol engine. In the E-Tense 225, the engine delivers 177bhp and is paired with a single 80kW electric motor that drives the front wheels to produce a maximum combined system output of 222bhp. 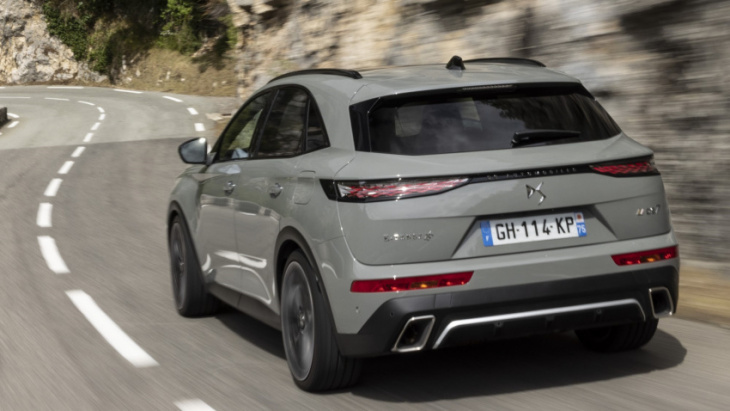 DS massages the combustion engine’s output to 197bhp for the two other PHEVs and adds a second electric motor with up to 83kW. This drives the rear axle to create an all-wheel-drive transmission. The mid-range E-Tense 4×4 300 can dash to 62mph from rest in 5.9 seconds thanks to its totals of 295bhp and 383lb ft. Opt for the 350bhp range-topper and you’ll shave another three tenths off that time.

If you’re not interested in dealing with cables, apps and charging, DS will, for now, still sell you a pure combustion engined version, but it’s a diesel. The 1.5-litre turbocharged four-cylinder BlueHDi 130 is an engine that also does service in other Stellantis models, such as the Peugeot 3008.

How does it drive?

It’s not short of refinement, so long as you aren’t trying to exploit all of that PHEV performance. Nonetheless, even with its patented camera-controlled adjustable suspension that can alter each corner’s damping to suit the road surface, the ride is sometimes inconsistent. Carry any sort of speed through bends, and the extra weight of the plug-in system quickly makes itself known. Any attempt to hustle it along sends the drivetrain into a flurry of revs and noise that doesn’t seem to amount to much and certainly isn’t pleasurable. The steering doesn’t offer up tremendous feel or feedback, either. 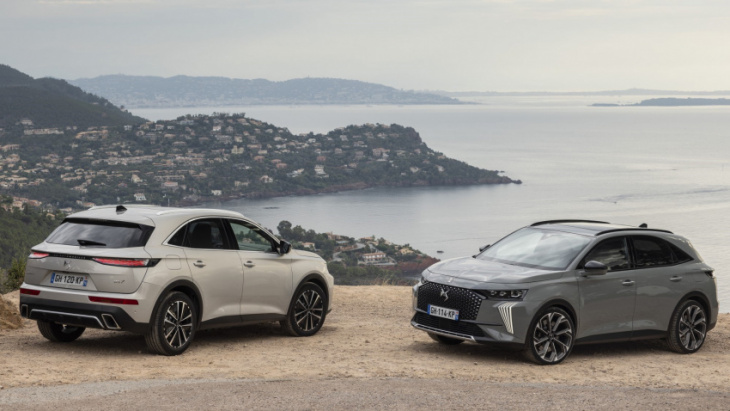 Back a few tenths off the pace, and the DS settles into a comfortable groove that fits its ability better. It glides along electrically in near silence when possible. In its hybrid mode, the engine cuts in and out smoothly and generally it’s a relaxing car to drive so long as you don’t expect it to be some sort of high-riding, high-powered rally car.

If you’re looking for a premium mid-size SUV that’s a bit leftfield, the DS 7 ticks the boxes regarding quality and comfort. It leaves a bit to be desired on the dynamic front, but so long as you’re not hunting down apexes, it’s a comfortable cruiser, and it certainly looks the part.