Best Spy Shots For The Week Of August 22

The highlights this week are the Cadillac Celestiq, Lamborghini Huracan Sterrato, and a bunch of refreshed Mercedes models. 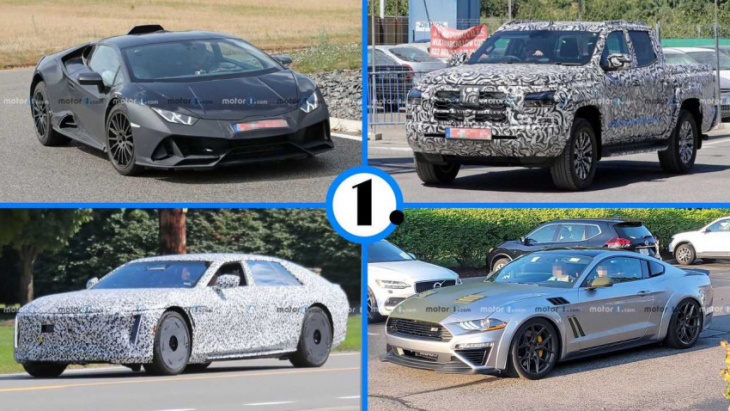 Motor1.com puts up spy shots of upcoming vehicles practically every day and sometimes more than that. If you want to stay on the cutting-edge of what’s on the way check out this list of all of the glimpses of development vehicles from the past week.

BMW only puts a little camouflage on the front of this refreshed X6 M. The covering doesn’t hide much, though. You can easily see the new fascia.

The Cadillac Celestiq is now in the on-road testing phase. This one looks the same as the car in previous spy shots, but the photos offer a good look at the tires. The EV is riding on Michelin Pilot Sport rubber, which suggests the company might be engineering the sedan for some sportiness in addition to luxury.

Roush is working on a special-edition P-51B version of the Mustang. For anyone unfamiliar with World War II-era aircraft, this plane’s other designation is the Mustang, so blending it with the car makes a lot of sense. The vehicle boasts wide fenders, an aggressive front splitter, and a rear spoiler.

Jeep is working on a model to slot below the Renegade. It reportedly rides on PSA Group’s e-CMP platform, which vehicles Peugeot, Citroen, and Opel also use. A fully electric version is under development, too.

After seeing photos of it last week, we got a video of the KTM X-Bow GT-XR lapping the Nürburgring. The Audi-sourced turbocharged five-cylinder sounds great.

The Lamborghini Huracan Sterrato is a high-riding version of the supercar that owners would be able to take onto dirt or gravel roads. It features extra body cladding and a roof-mounted air scoop.

Next-Gen Mitsubishi L200 Spied Ahead Of Expected Debut In 2023

Unlike previous spy shots of the Mitsubishi L200, this one has extra cladding around the wheel wells, running boards, and roof rails. The parts suggest this might be a higher trim level or a package of more rugged parts.

The refreshed Mercedes-AMG GT 4-Door gets a new nose. Unfortunately, the engineers cover it up so much that seeing the changes is a challenge.

The Mercedes CLA-Class also has a refresh coming. There are styling tweaks to the nose and tail.

And, here’s one more refresh coming from Mercedes. The GLA 35 has a new lower fascia and taillights.

Here’s how the refreshed look appears on the GLA 45. It appears that the front fascia is a bit more aggressive than the 35 variant.

Keyword: Best Spy Shots For The Week Of August 22