Aventon Level.2 review: Truly a top-class commuter electric bike, but for one thing 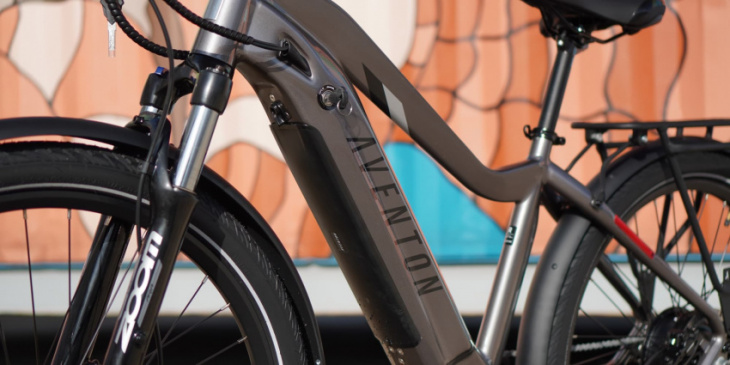 I’ve been an Aventon fan for a long time, having been routinely impressed with the quality of each new electric bike the company has released. And so I went into this review of the new Aventon Level.2 with a fairly high bar for the company. Fortunately for everyone, Aventon largely cleared that bar with room to spare, delivering a Level.2 that is truly worthy of the label “flagship commuter e-bike.”

So much, so new

Right out of the box, there was a lot of new stuff to take in here.

Like all of Aventon’s new e-bike launches and e-bike updates lately, the Level.2 inherited the upgraded Aventon color LCD display that integrates with the company’s smartphone app. A solid Bluetooth connection pairs the bike to the phone, letting you record rides, make speed adjustments, connect with the larger Aventon community, and more.

But it wasn’t just software that was new, the Level.2 comes with a bunch of new hardware, too.

The biggest take home is the new torque sensor, which gives much nicer and more responsive pedal assist. The sensor allows the bike to respond quicker and provide a more natural-feeling ride. The harder you pedal, the more assist you get. That’s exactly how an e-bike should function.

When you’re not feeling like putting in some good effort yourself, the thumb throttle makes it easy to kick back and fly along at up to 20 mph (32 km/h). Aventon used to have a longer delay with the throttle, but they’ve tuned it nicely so that you get good throttle response.

That used to be a critique that I would throw at Aventon with each new bike, but they’ve really done a nice job at making the throttle responsive without feeling like it’s dumping all its power at once.

Even with that nice throttle, I find that I still really like using pedal assist. I rarely bump up to level 5 since that’s the most powerful level, and I don’t really need that much assist.

Don’t get me wrong, it’s fun to fly along at 28 mph (45 km/h) with your feet flying fast and the trees going by even faster. But more often I’m somewhere in the middle, cruising in pedal assist level 2 or 3 and enjoying modest assist that still leaves me doing some good ol’ honest pedaling.

The bike is even decently light for a well-spec’d commuter e-bike, at a hair over 50 pounds. Many commuter e-bikes are significantly heavier. With parts like front suspension, a nice seat, hydraulic disc brakes, an 8-speed transmission and a big battery, the grams quickly add up and turn into kilograms. But Aventon kept the weight reasonable, and I applaud that. 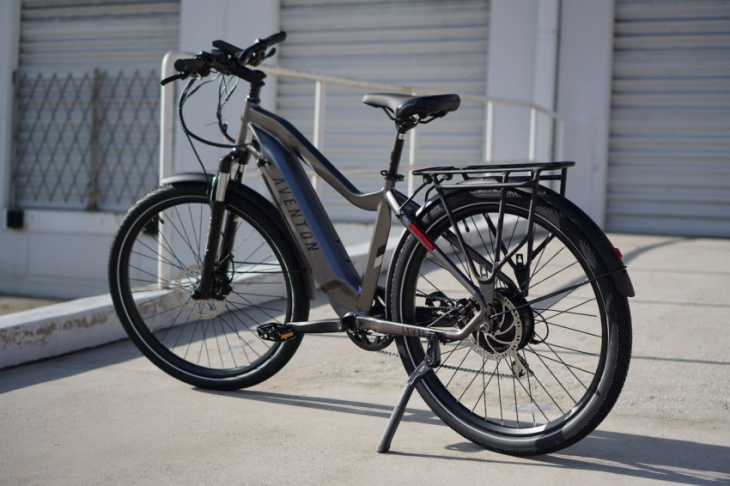 The last major hardware addition that I really love is the new taillight setup. We get frame-integrated taillights that are built right into the seat stays on the back of the bike. They illuminate both sides of the bike and are visible from the rear and side angles.

Not only are they clear and bright taillights, but they serve double duty as brake lights. I’m a bit surprised that Aventon hasn’t been interested in giving them a turning signal function yet, but maybe that’s something for the future.

As a commuter electric bike, lights are key. They’re important for night riding, but they’re still important during the day too in order to make you even more visible. The bright front headlight is sure to be noticed, as are the taillights.

How much is the Aventon Level.2?

That brings me to the cost.

The Aventon Level.2 is priced at $1,949, which feels like the only bummer here. It’s not a miss. They didn’t swing and whiff it like some companies do. But they didn’t connect quite as solidly as I had hoped.

You do get a lot here for your money. And the price is fair – don’t get me wrong. But if the original Level was $1,599 two years ago when I first reviewed it, I would have hoped that these upgrades wouldn’t have pushed the bike up another $350.

And again, I keep going back and forth with myself here. A lot has changed in two years. Parts are scarce. Shipping is expensive. The whole world has change drastically in just two short trips around the sun. And so maybe I’m being too harsh. As it stands, there aren’t really any e-bikes that can challenge the Aventon Level on specs for price when you consider that torque sensor. Even the best from Rad and Ride1Up don’t have torque sensors, and so they can’t really compete directly.

The one potential comparison perhaps is the Lectric XPremium, which is a great bike with arguably better performance for slightly less cash. But it’s also a fat-tire folding e-bike and is thus a very different animal. For anyone who wants a lighter-weight e-bike with full-size 27.5×2.1″ wheels like this, the Aventon Level.2 is likely the ticket.

Summing it all up

All told, I’m immensely happy with the new Aventon Level.2. This is an e-bike that can perform nearly any commute, anywhere, and for anybody.

With a well-made frame, visible lighting, high-performance motor and battery, and included commuter package of fenders and rear rack, the Level.2 is everything you would ever need in a commuter electric bike.

You’d be hard-pressed to find a better collection of parts from a reputable company like Aventon for a better price. If it’s out there, I just haven’t found it yet.