Formula 1’s post-season test always has the unique double effect of signing off the current season and giving us a sneak peek for next year, which is particularly fun when drivers swap teams.

It’s always fun spotting drivers turn up in new places, especially when we’ve got used to them in certain colours, although Fernando Alonso took that to the extreme in Abu Dhabi this week with Aston Martin, which had to run him in a completely unbranded car.

This was a very rare sight, even though it’s something Alonso has had to do before, when he got some early testing in with McLaren in late 2006, and for totally different reasons is something we saw earlier this year when Haas stripped back its car livery on the final day of the Barcelona test to remove its Uralkali sponsorship.

Unlike the Haas decision, though, Alonso’s naked AMR22 was down to how quirky the rules around early team moves can be.

Alonso drove Aston Martin’s 2022 car in the first five hours of the Abu Dhabi test on Tuesday, ahead of formally joining the team in 2023.

And the first thing everybody noticed about his first Aston Martin run was that the AMR22 was seen purely in its base colour scheme, with no sponsor logos or even the little Union Jack that usually adorns the tip of the nose. 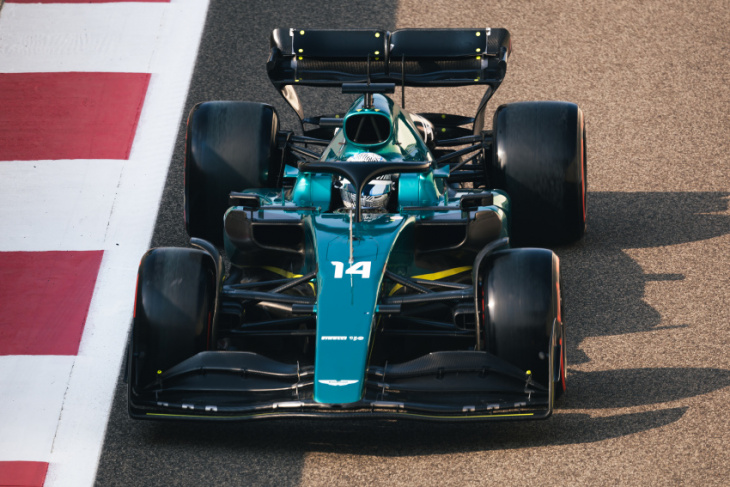 Only a small Pirelli sticker and Aston Martin badge appeared on the car, along with Alonso’s number, while Alonso himself wore a black race suit and a neutral crash helmet design.

This is because Alonso’s allowed to drive for Aston Martin but isn’t allowed to advertise the brand or its sponsors as he’s still under contract with Alpine. That’s a shame for Aston Martin given the chance to have a few more months of assets with Alonso in its car would be a nice marketing boost ahead of the car launch and pre-season test.

“Yes, unfortunately, it’s like that. But we’ll have a lot of photos of Fernando in the next few years, hopefully, with a full-branded car!

“It’s how it is, and I think that no matter about that, it’s really good to have Fernando in the car. It’s good for him, it’s good for the team, it’s great for him to know who are the people that’s going to work with him and for the team to start working on things that he might ask today for the future.

“So, all in all, I think it’s a win-win situation. And I’m sure that when finally we have the branded car, it will be a big surprise.”

De la Rosa’s right: not being able to show off Alonso representing its sponsors is a small price to pay for an early headstart on 2023.

Nonetheless, having to de-sticker an entire car is an unusually extreme manifestation of something that is actually quite common: drivers having to observe certain conditions to be released early to test for another team. And we saw the usual variations at this very test.

The cleanest break, ironically given how acrimonious his Alpine split was at times, was Oscar Piastri joining McLaren the day before the test.

He’s now fully contracted to McLaren, so this allowed Piastri to be decked out fully in team gear for his first official day of running in the 2022 MCL36, having previously driven its 2021 car in private. 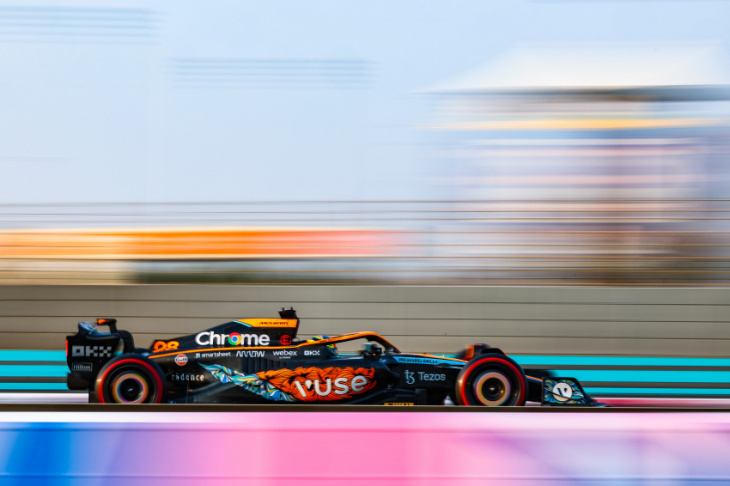 Others either didn’t have quite the same freedoms, or were just lacking equipment!

Over at Haas, Nico Hulkenberg is clear of his Aston Martin reserve driver duties and wore a Haas race suit, but only drove with a plain white crash helmet.

Nyck de Vries made his AlphaTauri debut wearing a plain race suit because he is still officially a Mercedes driver, and there will be no official imagery of him at the test from the team itself because it cannot publicise it. He didn’t speak at the end of the day either.

You may also have seen Pierre Gasly rocking a plain set of overalls despite his crash helmet having Alpine and sponsor stickers over it, and the answer for that is…we don’t know.

Gasly even said afterwards that he is basically an Alpine driver now, apart from some final commitments with Red Bull and AlphaTauri, so there was no obvious explanation.

There were far more important things happening at this test than what the drivers and their cars looked like, but given aesthetics are a key part of how fans engage in F1, these minor occasions are something of a fun oddity.

So it’s harmless fun to focus on them, especially as a test like that doesn’t offer any serious clues about next season anyway – at least beyond the fact Alonso’s Aston Martin should be fully stickered up by then.