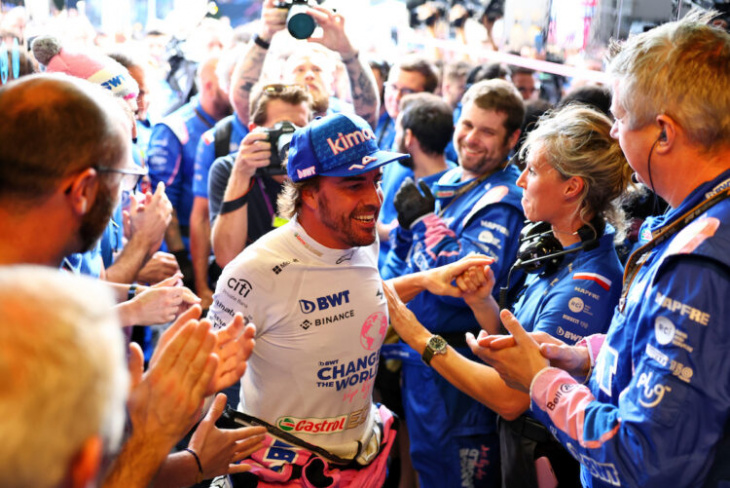 Fernando Alonso says that finishing his Alpine Formula 1 career with a non-finish is a “sad” way for it to come to an end.

Alonso was in the fight for points at Sunday’s race in Abu Dhabi, before he was forced to return to the pits after Alpine uncovered a problem.

It marked yet another reliability issue that Alonso has had this year, with engine issues plaguing his 2022 campaign.

Alonso returned to Alpine last year after two seasons on the sidelines, hoping to replicate the success he achieved with it under the Renault name in the mid-2000s.

However, he has opted to leave for Aston Martin in 2023, and was left disappointed to be unable to cap off his Alpine career on a high note.

“Disappointed, for sure,” Alonso reflected after the race. “Millions of people are disappointed now, fans… it’s the way it is.

“It’s been a very unlucky season in terms of… well, not unlucky, we are not prepared reliability-wise. I think it’s the sixth or seventh DNF.

“A couple of races they don’t count it as a DNF. In Australia we had trouble in qualifying, Austria the car didn’t start in the Sprint Race and some other races we were not ready to compete.

“I’m a little bit sad to finish like that, but it’s the way it is.”

Alonso will drive the Aston Martin F1 car for the first time on Tuesday, taking part in a post-season Pirelli tyre test at the Yas Marina Circuit.

“That’s the best thing about today, one day less to be in green. Tomorrow I start on this project with the seat fit, meeting a few people,” he said.

“Then on Tuesday testing the car, hopefully it will be a good chapter. All the unreliable luck this year hopefully compensates next [year].”