Abarth has unveiled its first all-electric model, the 500e, which is a performance-enhanced version of the Fiat 500 Electric that produces 155hp and a 0-62mph sprint time of seven seconds.

This long-awaited electrified hot hatch makes use of the same 42kWh battery as the Fiat it is based on, but the introduction of a more powerful electric motor and other technical upgrades means that the Abarth produces 38hp more than the Fiat 500 Electric, and is around two seconds faster in a 0-62mph sprint too.

The combustion-powered 695 hot hatch, currently the range-topping model in the Abarth line-up, is still a fraction of a second faster to 62 mph, but this new electric hot hatch is faster off the line. The 500e can accelerate from 12mph to 25mph in one second, twice as fast as anything in Abarth’s current offering.

Abarth has also made the 500e two centimetres longer and six centimetres wider than the Fiat 500 Electric, to improve handling performance in high speed corners, and comes with three driving modes. The standard ‘Turismo’ mode is the least taxing, as it limits the car’s power to 100kW to maximise battery efficiency.

The ‘Scorpion Street’ and ‘Scorpion Track’ modes prioritise performance by upping the car’s power to 113kW, though the difference between the two isn’t exactly clear as of yet. Both modes allow for one-pedal driving – the car will decelerate when the accelerator is lifted, and the hot hatch uses regenerative braking to provide further power for the drivetrain. 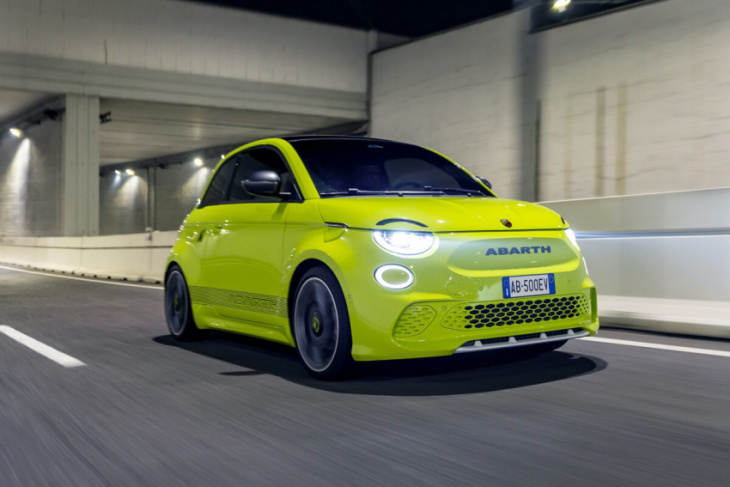 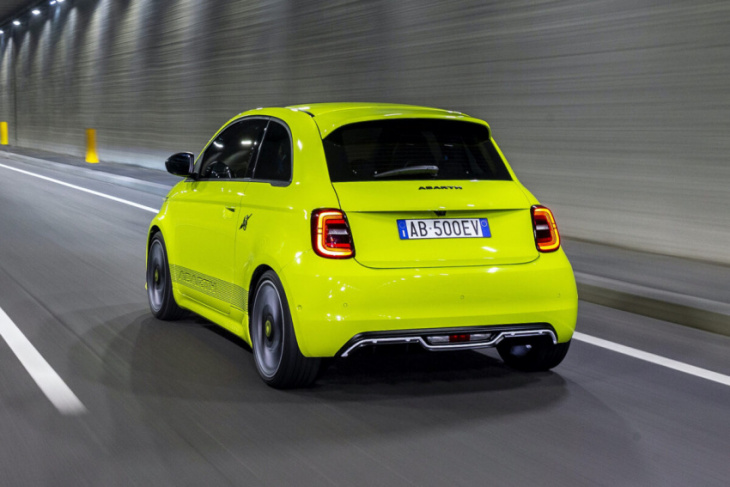 Well aware that this will be the first model in its 73-year history to come without a petrol-powered soundtrack, Abarth has given the 500e an artificial engine soundtrack that can be heard in the cabin. This can be switched off though at the driver’s discretion, for a quieter driving experience.

While the Abarth’s exterior styling differs from the Fiat in a few subtle ways, including a slightly wider front end, lower side skirts and the eye-catching ‘Acid Green’ bodywork of the show car, the 500e and 500 Electric are almost identical inside, featuring a seven-inch digital instrument cluster behind the Abarth-branded steering wheel, a 10-inch infotainment screen in the centre of the dashboard that displays the feed of a rear view parking camera.

The 500e range includes a JBL premium sound system and Alcantara leather seats, as well as a wireless smartphone charger and keyless entry, but some of these features will be reserved for top-spec models. 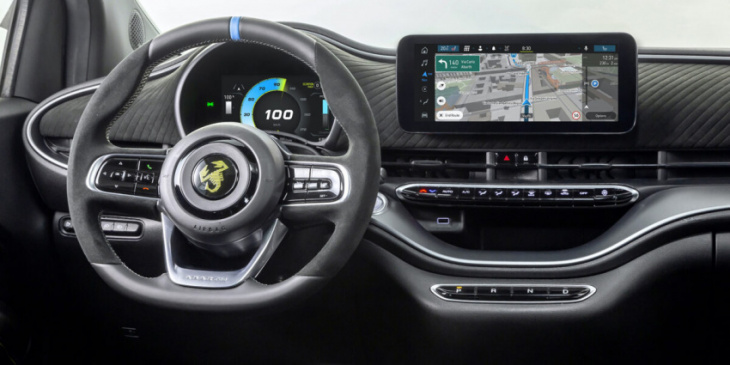 Finally, Abarth says that its 500e will be able to charge its battery to 80% using an 85kW charging cable in an estimated 35 minutes.

The brand has not yet confirmed the EV’s battery range as of yet – by comparison the Fiat 500 Electric can travel a maximum of 143 miles on a single charge.

This, and other details like trim specifications, UK pricing and arrival dates, will be announced in the coming months.