A Buyer’s Market for Cars, Trucks Is around the Corner

Used vehicle prices slipped in August, while new model stickers were up slightly. Dealer lots are filling up again, so let the bargaining begin. 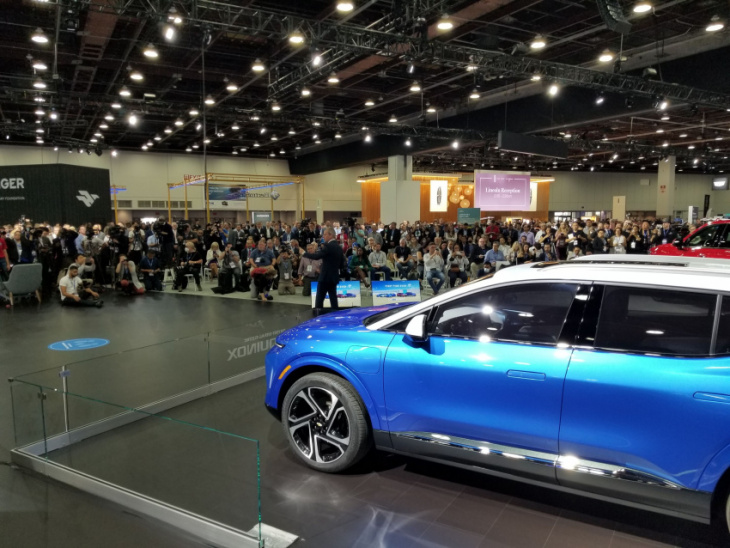 Used vehicle prices fell by 0.1% in August, according to the Commerce Department, one of the few bright spots from the Consumer Price Index, which did not decline as quickly as economists expected, stoking fears that were realized Wednesday when the Federal Reserve hiked interest rates by another three-quarters of a point.

Contributing to an overall annual inflation rate of 8.3%, down modestly from 8.5% in July, was an increase in the price of new cars and trucks, up 0.8%.

New car prices seemed high to a lot of middle-class consumers when the average transaction price (ATP) topped $36,000 before the COVID-19 pandemic. When automakers chose to save their supply-constrained computer chips for more expensive models, ATPs jumped by roughly one-third.

In Cox Automotive’s report for August, the average listing price was $46,425 for a new vehicle, down slightly from the previous week, but with product mix keeping prices high. According to the CPI report for August, new vehicle prices were up 10.1% over August 2021, and used vehicles would cost you 7.8% more than one year earlier. Cox Automotive’s August average listing price for a used vehicle was what you might expect to pay for, say, a fully equipped new Honda Civic—$28,061.

Gas and diesel prices, thankfully, are not locked in high places. The Commerce Department Bureau of Labor Statistics’ gasoline index fell 10.6% in August (see chart below). According to AAA, the national average for a gallon of regular unleaded, which peaked at $5.016 on June 14, had fallen to $3.707 per gallon on Sept. 13, the day of the August CPI release.

The higher new car prices may be one way of achieving parity between legacy internal combustion-powered vehicles and electric vehicles, which are selling for an average of $66,000. 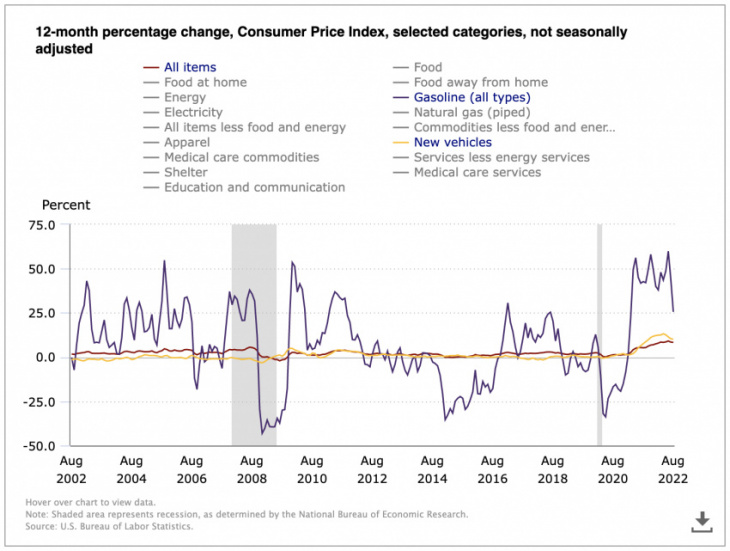 Although Telsa and Ford with its F-150 Lightning EV have recently had to concede price increases due to critical parts and material shortages, there are a slew of more modestly priced models on the way. General Motors appears to be taking advantage of its Ultium one-for-all BEV architecture, for example, as company President Mark Reuss recently announced that a Chevrolet Equinox EV starting in “the low $30s” would arrive next year. Even well-equipped it should sticker somewhere under the current ATP for all models.

More significant for new-car shoppers, Cox Automotive says supplies of key models are coming up. In the pre-coronavirus days, 80-days’ supply was about optimal for high-volume models, and some full-size pickups, for example would often top 100 days’ supply.

The average now is 49 days’ supply, says Cox Automotive. That’s pretty steady since January, though a full 30% over last year—this means dealers’ lots aren’t empty anymore. Improving supply means the potential for some old-fashioned dickering with car sales personnel and their managers, and it’s conceivable some high-volume brands could go from supply famine to a feast-with-leftovers for consumers.

Keyword: A Buyer’s Market for Cars, Trucks Is around the Corner