Saloon and estate versions from launch 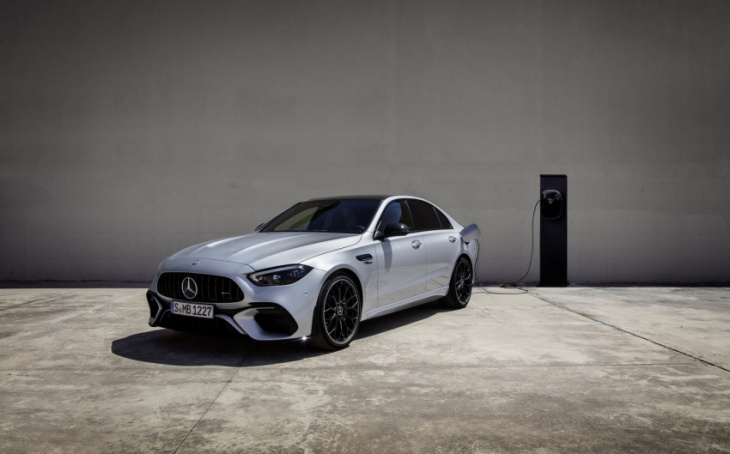 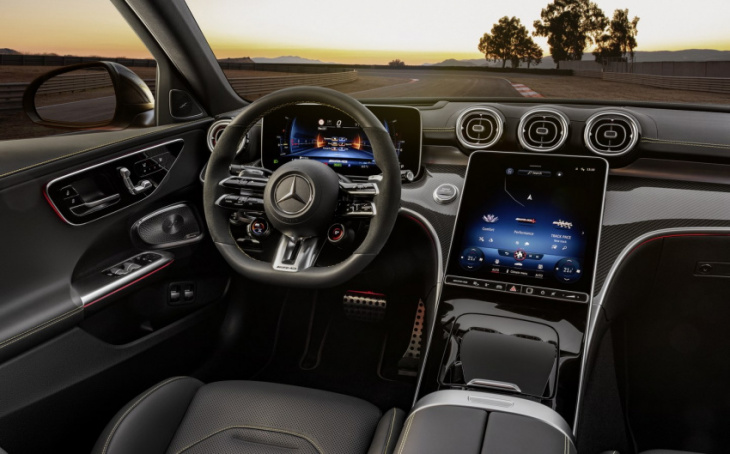 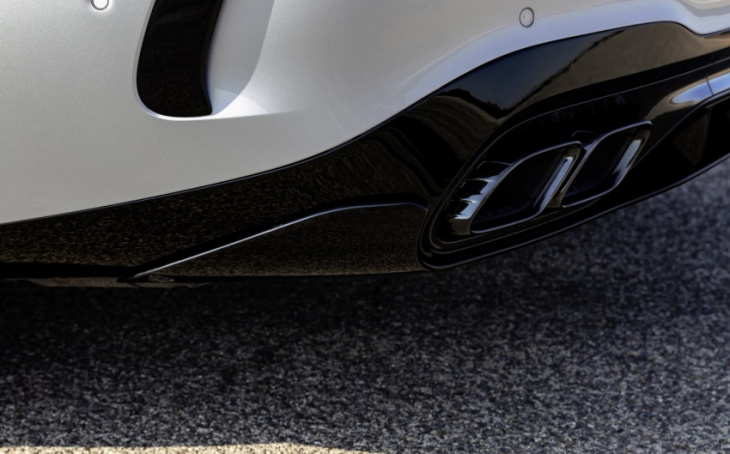 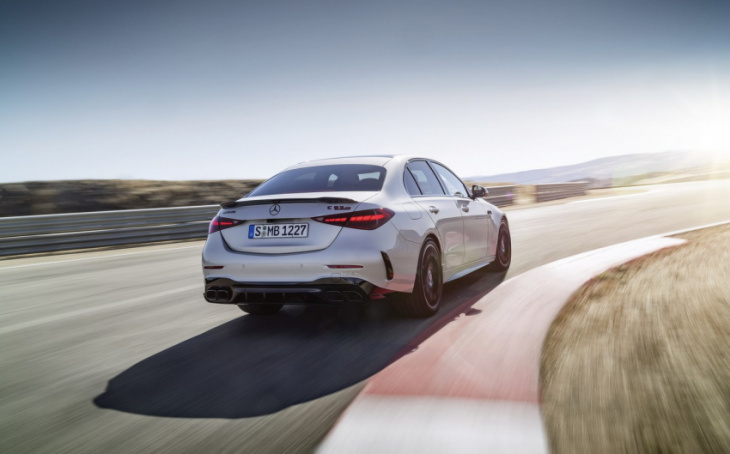 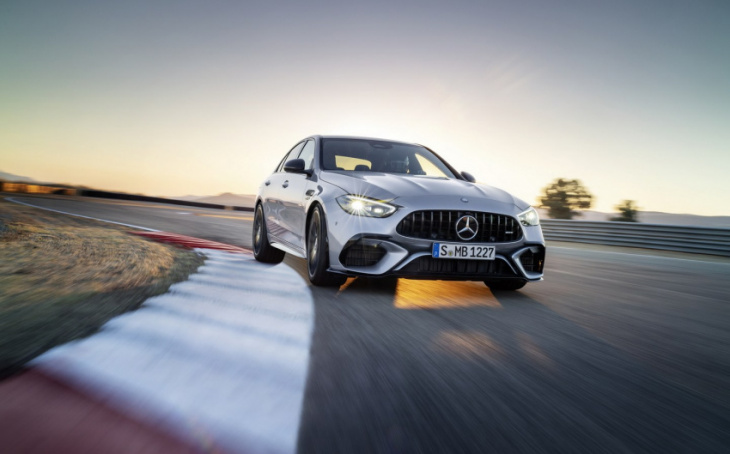 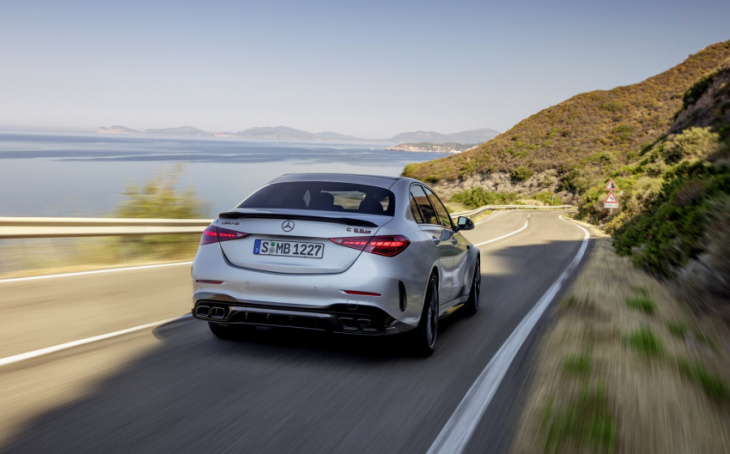 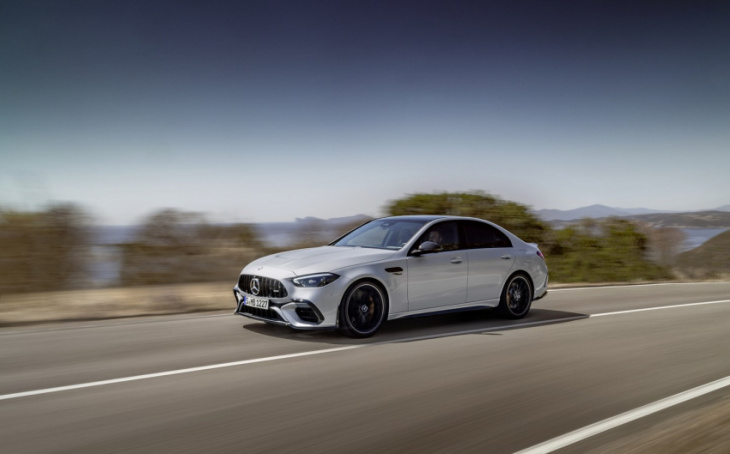 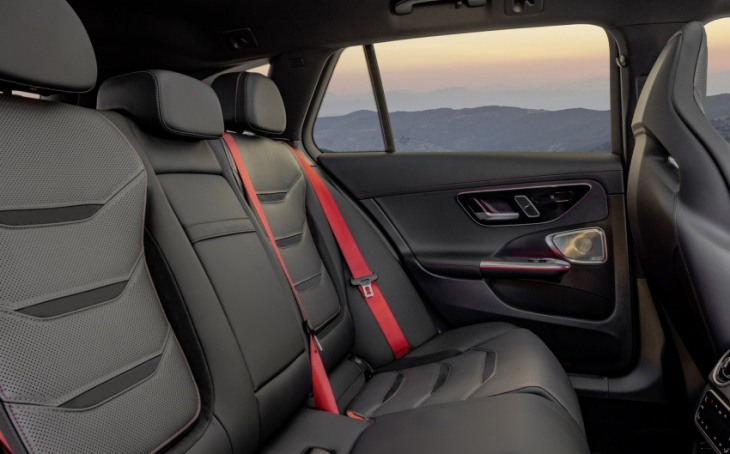 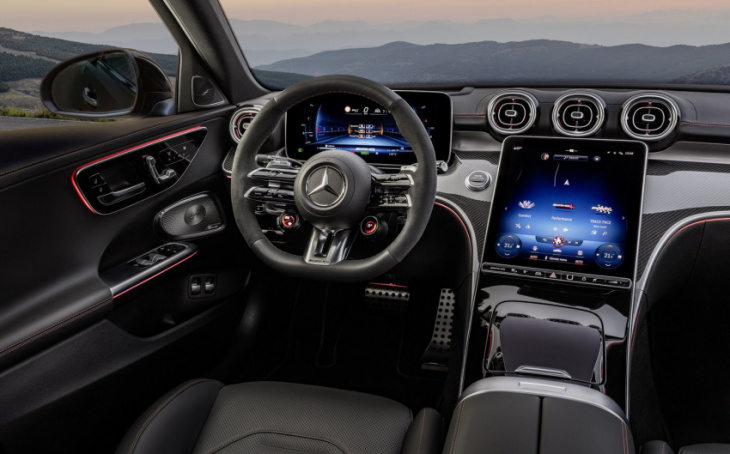 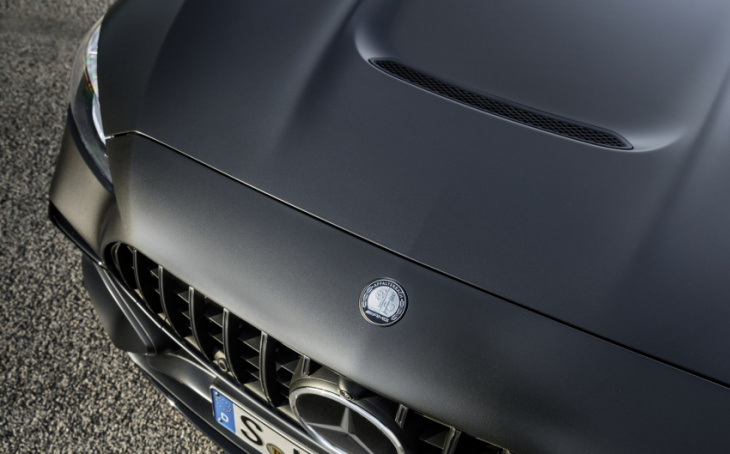 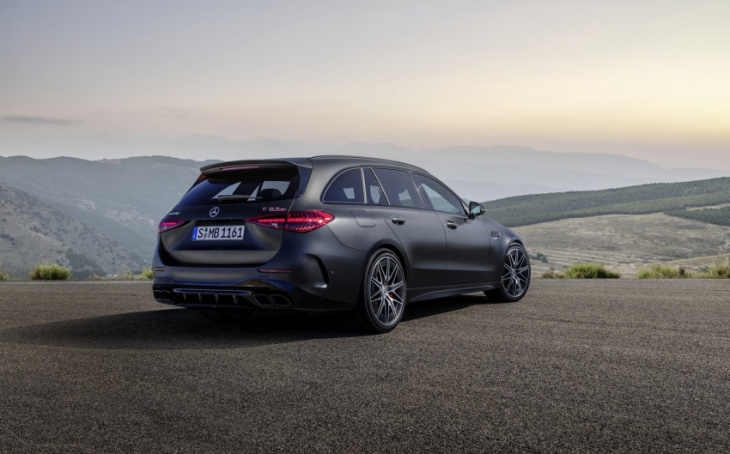 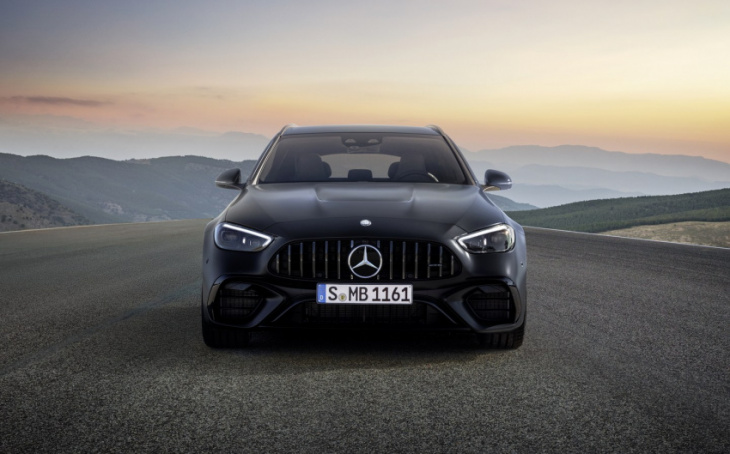 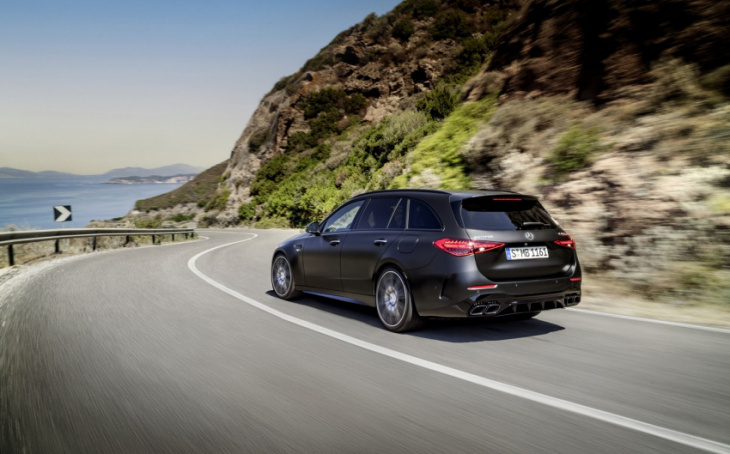 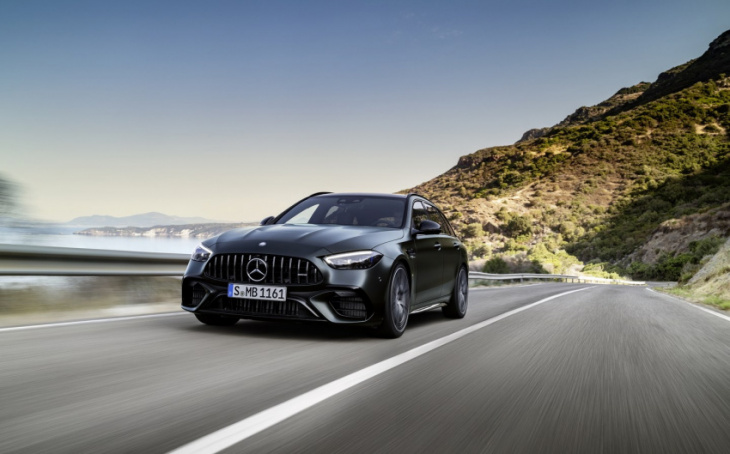 Mercedes-AMG has unveiled the C 63 S E Performance, the new range-topper in the C-Class line-up and, with 670bhp on tap, it’s the most powerful production C-Class yet seen.

Launching in both saloon and estate forms, the C 63 S brings to the table some of the know-how Mercedes has gleaned from its motorsport endeavours including a high-performance hybrid powertrain and an electrically-assisted turbocharger system designed to eliminate power lag.

While the C 63 S features more muscular styling than a standard C-Class, the extent to which it has been re-engineered compared with the base model isn’t immediately obvious at first glance.

The front track has been widened to cope with the uprated suspension meaning that the wings are 76mm wider than a standard car’s; the front-end has been stretched in length by 50mm, while the overall length of both the saloon and estate is 83mm longer in both cases, and even the wheelbase has been stretched by 10mm.

Other small styling cues signalling the C 63 S’s intent include the vented and bulging bonnet, the AMG-specific grille and front apron and a round black AMG badge on the bonnet instead of the traditional Mercedes logo (though the three-pointed star remains on the grille).

Under the new bonnet lies the key to the C 63’s outrageous performance in the form of what Mercedes claims to be the most powerful four-cylinder powertrain in the world.

That powertrain sees a 469bhp 2-litre turbocharged engine in the front mated with a 201bhp electric motor in the rear to deliver up to 670bhp and a substantial 752lb ft of torque to all four wheels, fed through a nine-speed multi-clutch automatic gearbox.

As a result, the new Mercedes-AMG C 63 can manage a 0-62mph time of 3.4 seconds — more than half a second quicker than the outgoing version. 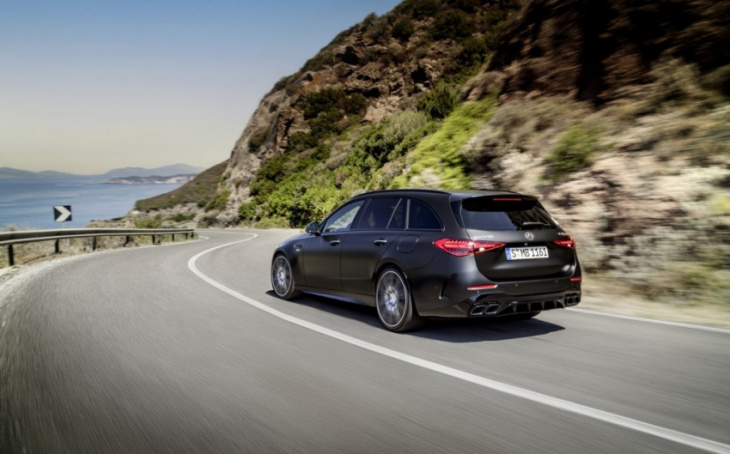 In a normal turbocharger, exhaust gases alone spin the turbine wheel, sometimes resulting in a momentary lag in acceleration. The C 63 S, however, employs a tiny electric motor inside the turbocharger to keep the compressor spinning at all times if required, maintaining boost pressure to ensure there’s never a delay between when the driver puts their foot down and the engine responding.

Thanks to an energy recuperation system — which Mercedes says is inspired by the one found in its F1 cars — that extra energy from the battery and motor is always available when the driver needs it, such as when overtaking or accelerating out of a bend. 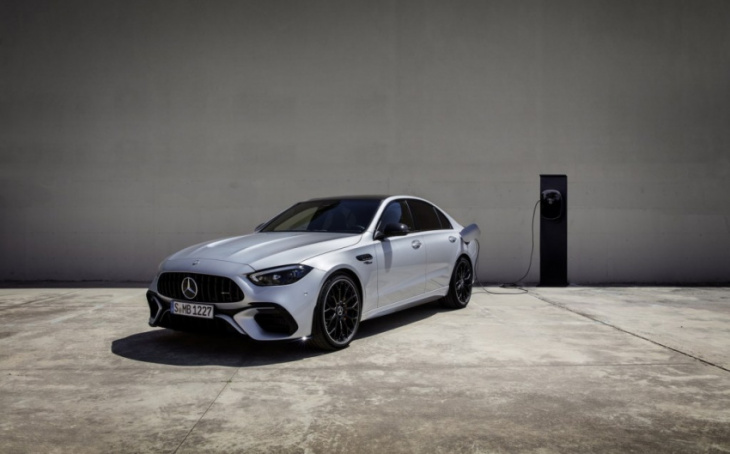 The hybrid system isn’t all about the power though: the directly-cooled 6.1kWh battery (rechargeable via the on-board 3.7kW AC charger) can deliver around eight miles of electric-only driving on a full charge.

The driver has plenty of choice when it comes to the way in which the C 63 S and its hybrid system deliver their power, with eight different driving modes ranging from the self-explanatory “Electric” to “Race” to “Slippery”.

Electric keeps things solely battery-powered until the driver wants more power or the battery depletes; Comfort strikes a balance between electric and engine power for everyday driving conditions; Sport and Sport+ tilt the balance towards performance, sharpening up the throttle responses and gear shifts, increasing the boost from the electric motor; Race takes that to a higher level still and is primarily for track use; Slippery caters to tricky surfaces by reducing power and preventing electric-only running. 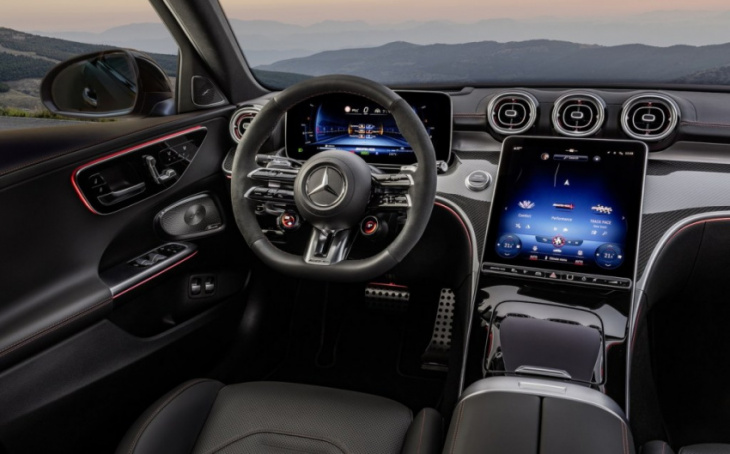 Meanwhile, the electronically controlled suspension system uses adaptive dampers to best handle the damping and ride quality depending on one of three selectable damping maps: Comfort, Sport or Sport+.

Stopping power comes courtesy of six-piston fixed brake calipers at the front and one-piston floating calipers working at the rear, designed to resist fade during heavy use.

Pricing for the Mercedes-AMG C 63 S E Performance has yet to be announced, but expect a little over £80,000.