Always put the car in park before exiting. 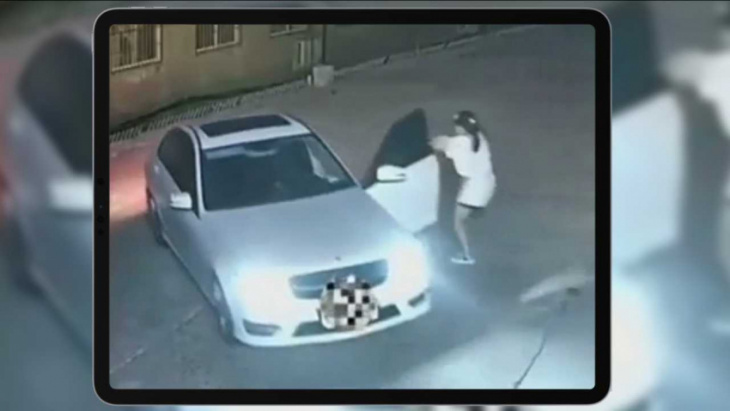 With cameras everywhere all the time recording, it’s inevitable that they’ll capture people and their flubs. Dash cams, security cameras, and smartphones have proved a boon for internet entertainment where the world and its warts are fully displayed. Such cameras have also captured plenty of vehicular screwups, and a new security video posted to Reddit’s r/IdiotsInCars shows one driver’s embarrassing endeavor.

Security camera footage shows a woman climbing into a Mercedes sedan, and it doesn’t take long for things to go wrong. The car’s front wheels are turned, so when the Mercedes begins to back up, it also begins to turn. However, the driver doesn’t attempt to correct it, backing the car, so its front tire hits what looks like a washing machine.

This is where things go from bad to worse. The driver gets out of the car and attempts to move the washing machine, but it’s stuck, likely pinned between the car’s tire and the column, and it doesn’t budge. She climbs back into the car to straighten the wheels before getting back out in another attempt to move the machine. She struggles, walks away, and returns before trying again, yanking at it several times before she scoots it out of the way of the car.

However, as soon as the washing machine is free, the sedan begins to roll backward, still in reverse. The driver forgot to put the transmission in park before exiting. She chases after it, grabbing the open driver’s door in a futile attempt to stop the Mercedes from rolling away, but she’s unable to slow it, let alone stop it. The car rolls backward, careening into another building and falling into the alleyway between them. The video ends with the car’s headlights flashing across the camera.

Understanding where your car is located in relation to things around it is vital to safe and effective defensive driving. The driver missed several opportunities to avoid colliding with the washing machine and getting the car stuck. Straightening out the wheels would have avoided much of the hassle, but it happened too late and without the car’s transmission in park. The entire situation could have been much worse.

Keyword: Mercedes Reverses On Its Own After Driver Fails At Backing Up