Lewis Hamilton is keen to bid farewell to Mercedes’ troubled 2022 Formula 1 car in the post-season test, as both drivers complained of a return of porpoising at the Abu Dhabi Grand Prix.

The Mercedes W13 was dogged by the ground effect phenomenon at the start of the season, forcing its drivers to suffer from high frequency bouncing mainly down the straights at high speed.

Mercedes was not the only team dealing with this although it was the most aggressively affected.

It made progress in understanding and reducing the problem as the season progressed, plus the FIA introduced a mid-season technical directive aimed at helping mitigate it, but certain track layouts and characteristics still trigger it for some teams.

Hamilton and team-mate George Russell the bouncing had returned in Abu Dhabi and that, combined with a big straightline speed deficit, made qualifying difficult.

Seven-time world champion Hamilton said Mercedes needs to “build a more efficient car” in 2023 and is “pretty confident that they’re not going to build the car with any of the characteristics”.

In the meantime, though, Hamilton said: “I’m looking forward to the end of Tuesday [the post-season test in Abu Dhabi] which is the last time I have to drive this thing and I don’t ever plan to drive this one again.

“It won’t be one of the cars I request to have in my contract!” 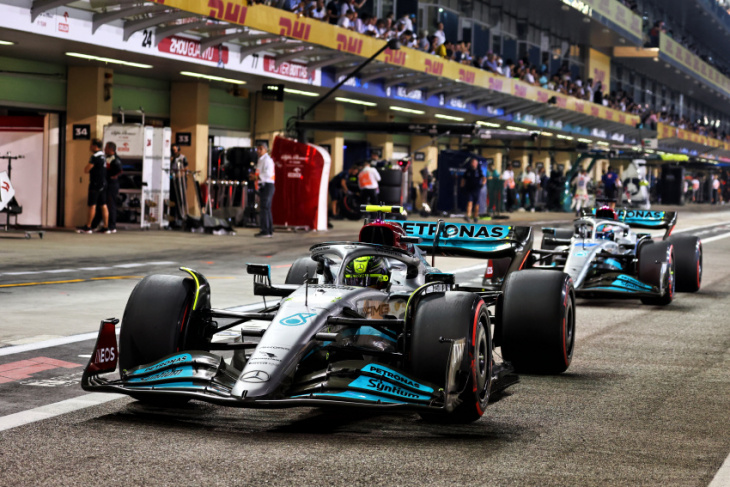 Mercedes team boss Toto Wolff echoed Hamilton’s comments about the W13, joking that it will “always have a special place in our collection – very far back!”.

He added: “I think that hopefully the next year’s will do her justice because the learning curve with that car was enormous, our fundamental understanding of aerodynamic and vehicle dynamics correlation has really gone through a step change of learning.

“It will also not be forgotten as the car that dominated the Brazilian Grand Prix!

“He says that the one victory a year isn’t really a record that bothers him and if I’m trying to put myself in his shoes, where I was before Brazil, it didn’t particularly bother me whether we would win a race this season because all our eyes are already on next year.

“But then having won one, that felt pretty good, so at least nobody [at Mercedes] can say they didn’t win a race that year.

“I don’t think that this particular record is an important one for him, but we need to provide him with a car next year that he can fight for victories and the championship, that’s most important. And he knows that.”

Hamilton and Russell lapped just three-thousandths of a second apart but were almost seven tenths adrift of pole man Max Verstappen, having scored a one-two in Brazil last weekend. 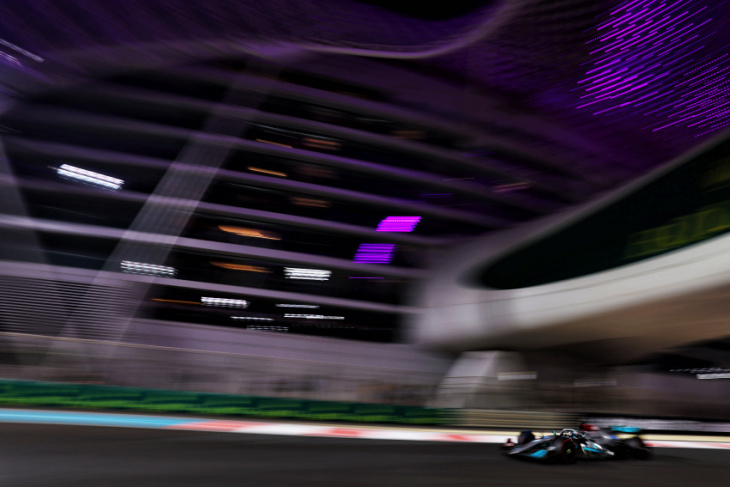 Russell said that the porpoising this weekend has been through the high-speed corners, which he described as “not incredibly pleasant” and suspected it contributed to the deficit.

“So, it’s good the changes the FIA introduced for next year are still being implemented, because it’s clear that that porpoising is still hanging around.”

Russell won the sprint race and grand prix in Brazil as Mercedes finally capped its in-season progressed with a first victory of the year.

But one week on, Wolff said it was an appropriate result on World Toilet Day, telling Sky Sports F1 “that’s one to put in the toilet”.

Elaborating in a later session with written media, Wolff said the porpoising return was “the track characteristic”.

“It’s a bit bumpy in some of the areas, you could see some cars that really have been hitting the ground heavily and the same with us,” said Wolff.

“It’s a bit of a compromise that we needed to take in terms of ride height to stop the bouncing.” 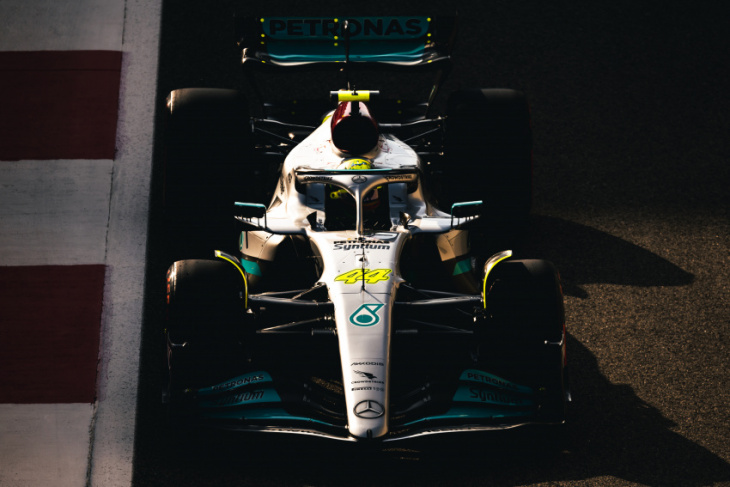 He also suggested it was a useful late-season lesson for Mercedes: “It’s important that when you come to a conclusion that it’s not a problem anymore, and then you find a track that’s maybe not the worst in terms of the bouncing and the porpoising and the poor ride is back…I think it’s good to have that here.”

Wolff said that Mercedes was aware coming into this weekend that a repeat of Brazil was highly unlikely.

Having experimented with high and low downforce rear wings in practice Mercedes opted for the bigger wing in the hope that the top speed trade-off will be rewarded in terms of tyre management.

“We are just way too draggy for a good qualifying time, we are losing six tenths on the straights and it’s not easily solved by just reducing the rear wing because it’s simply the aerodynamic efficiency that the car is lacking,” said Wolff.

“If we reduce the rear wing, we are not fast through the corners.

“In a way it’s good that there is a correlation between our simulation and the result, that’s the one positive that we see and I hope that we have a strong race car that is gentle to the tyres even though it maybe can’t overtake, or defend.”

Keyword: Hamilton eager to be done with Mercedes W13 as porpoising returns