While much attention has been on the bottom end of the EV market with BYD’s Atto 3 and the renewed MG ZS EV, the Renault Megane E-Tech won’t compete with them.

RENAULT is on the cusp of a seismic shift for its mainstay Megane, with the nameplate set to switch over late next year from being a hi-po hot hatch to an all-electric small SUV dubbed the Megane E-Tech that could end up competing on price with the likes of Tesla and Polestar.

Following its Australian launch in late 2023, the Megane E-Tech will be joined in the showroom in 2024 by the new Renault 5, which revives a nameplate – and look – not seen since the mid-90s and slaps it onto a light-segment all-electric hatchback that will occupy the space left by the Clio and its all-electric Zoe cousin.

Renault’s light commercial range is also getting the E-Tech treatment. The small Kangoo that was Australia’s first electric van in 2017 will return as a new-generation model in January, followed by the Master E-Tech large can and then an E-Tech version of the recently-relaunched Trafic mid-sized van in 2024.

While other small electric SUVs from the likes of BYD and MG are grabbing headlines with their $40-45K pricetags, the forecast for Renault’s French-built pure EV is for significantly higher positioning than those China-sourced models.

“Rare earths are pretty expensive at the moment, and while we thought battery prices were going down, that’s certainly not turning out to be the case … There’s a lot of water yet to go under the bridge between now and when that vehicle should get here.”

Price may be the determining factor behind whether the Megane E-Tech sinks or swims. Renault has experience peddling EVs in Australia, having brought the Zoe and Kango Z.E. to these shores in late 2017 as business and government fleet vehicles before offering them to the general public in mid-2018. Lessons were learned in the process.

“We’ve learned a lot about electrification: number one, you need to make it mainstream, so it needs to be available through the (dealership) network. Number two, you need infrastructure; a mainstream electric car without infrastructure just struggles. Lastly, you need range,” Mr Sealey said.

“We think by the time Megane E-Tech arrives there will be more infrastructure within Australia. We know the car has good range and there’s a couple of battery options for the vehicle.

“It’s a car we’re excited by and I think there’s a market for it here. But how we position it is really going to be governed by what it costs to produce.”

Renault’s Australian consumer site contains a teaser page for the Megane E-Tech that only makes mention of the more powerful motor and big battery combination, suggesting the company will skip over the base model and its potentially lower sticker price in favour of the variant with more grunt.

It would be a similar strategy to that employed by Kia and Hyundai with their EV6 and Ioniq 5 pure EVs, which bypass smaller batteries for this market.

While the Megane E-Tech sports SUV-like styling, the new Renault 5 – which uses a downsized version of the Megane E-Tech’s CMF-EV platform – will stay truer to its hatchback origins while offering around 400km of range.

According to Mr Sealey, the retro-futuristic 5’s debut is too far in the future to speculate on price.

“Come January we’ll launch the new Kangoo, which is on a completely new platform, and you’ll see a renewed Renault E-Tech within that. The old Z.E. was a terrific car for its day, but it’s old technology these days, but the vehicle that replaces it as an E-Tech vehicle is fantastic,” he said.

The Kangoo E-Tech has cargo capacities ranging between 3.9 and 4.9 cubic metres, with payloads ranging from 600 to 800kg depending on variant. Braked towing capacity is 500kg.

Its 90kW/245Nm electric motor is powered by a 45kWh liquid-cooled lithium-ion battery pack fitted beneath the cargo-area floor and consisting of eight independent and easily replaceable modules that provide a driving range of up to 300km on the WLTP test cycle plus 80kW DC fast charging capability claimed to add as much as 170km of driving range in 30 minutes.

All 15 Master E-Tech variants have a 57kW/225Nm electric motor and 52kWh battery pack for a WLTP range of up to 200km. Across three body lengths and three roof heights, payload capacities vary between 3100 and 3800kg while cargo volumes range from eight to 20 cubic metres.

The just-revealed Trafic also has 52kWh battery said to yield a WLTP range of 240 kilometres (WLTP) but its motor develops a beefier 90kW compared with the Master (no torque figure has been announced).

Beyond these, more electric Renaults will be coming to Australia.

“You will see other vehicles coming through, all the way through to 2026 we will have a new electric vehicle every year,” said Mr Sealey. 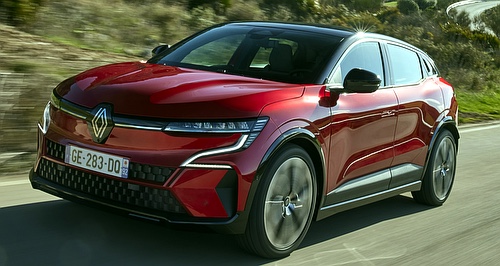