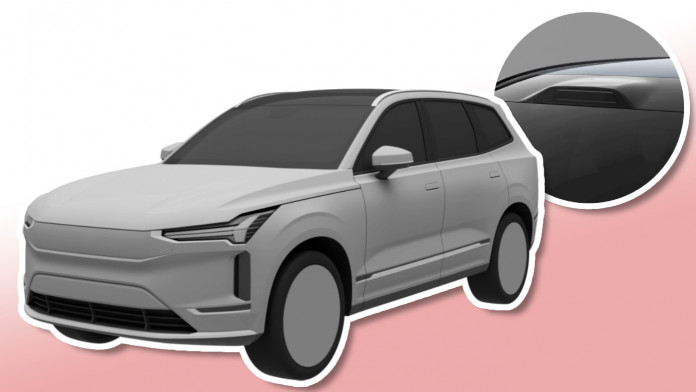 Volvo’s upcoming fully electric vehicle, which will take the guise of a 90-series SUV, is not quite ready for prime time yet. The official reveal date for the car is set for 9 November, but the Swedish carmaker did at least confirm its name during yesterday’s safety keynote: Volvo EX90.

Taking over the XC90 as the marque’s flagship SUV model, the EX90 will also be “safest Volvo car to ever hit the road”, thanks to the addition of several new sensors as standard, including a roof-mounted long-range LiDAR, as well as in-car sensors that can detect if the driver is distracted or intoxicated.

The new sensors are part of what Volvo calls “one of the most advanced sensor sets on the market”, which also includes including eight cameras, five radars, and 16 ultrasonic sensors. By combining the advanced sensors with in-house developed software and the car’s core computing power, Volvo says the EX90 is able to keep track of more potential hazards than ever before, both on the outside and inside.

LiDAR, which stands for Light Detection and Ranging, is a remote sensing method that uses pulsed laser beams to measure ranges with high precision and fidelity. The new sensor – which Elon Musk infamously hates – will be a key ingredient to enabling Volvo’s upcoming SAE Level 3 autonomous driving system, Ride Pilot.

While not a new technology, LiDAR has not been regularly implemented on production vehicles due to the sensor’s (traditionally) large size and high cost, costing as much as USD75,000 (approx. RM342k) each. However, it seems Volvo’s LiDAR partner, Luminar, has mostly solved the two main issues, with the company previously saying it hopes to price its sensors at just USD1,000 (approx. RM4,557) a pop, and eventually bringing it down to USD500 (approx. RM2,279).

Volvo says the addition of the LiDAR sensor can help reduce accidents with severe outcomes by up to 20%, and improve the car’s overall crash avoidance by up to 9%, based on its recent research.

Resembling a small roof scoop on the EX90, Volvo says the new LiDAR sensor can detect pedestrians at up to 250m distances, or something “as small and dark as a tire on a black road” 120 metres ahead – all this while travelling at highway speeds, no matter day or night.

As for the interior, Volvo is using a set of special sensors and a pair of cameras to gauge the drivers’ eye gaze concentration. The technology will see when the driver is distracted, tired, or otherwise inattentive, and will utilise several methods to bring the driver’s attention back onto the roads.

However, if the driver continues to be unresponsive, the EX90 is also designed to safely stop the car, and automatically call for help.

“Our research shows that by simply observing where the driver is looking and how often and for how long their eyes are closed, we can tell a lot about the state of the driver,” said Volvo Cars Safety Centre Senior Technical Expert, Emma Tivesten.

“By basing its calculations on our research findings, the sensing system allows our cars to identify whether the driver’s ability is impaired, perhaps due to drowsiness, distraction or other causes for inattention and to offer extra assistance in a way that best suits the situation.”

The new safety additions are all part of Volvo’s target of zero deaths and serious injuries in new Volvo cars. The Volvo EX90 will also help lead the charge in the marque’s goal of becoming a fully-electric carmaker by 2030.

Keyword: Upcoming Volvo EX90 EV will come with LiDAR as standard, to be unveiled on 9 November