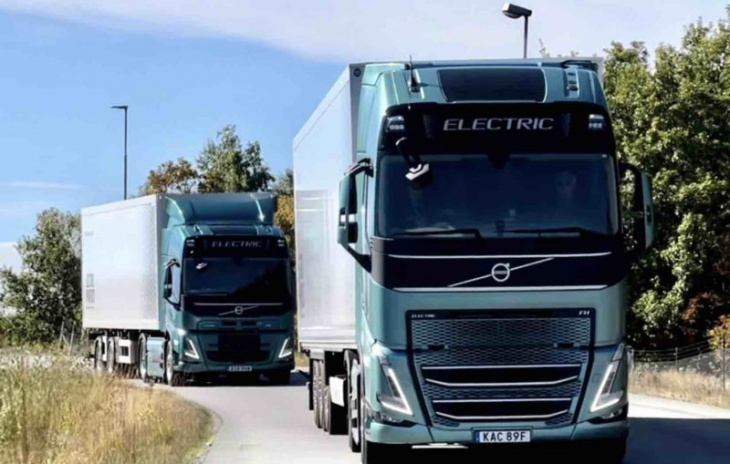 I’ve been driving an electric car for three years, and have tested many different models over the last five or six. This, however, was on a different scale altogether: a 19 metre long, 18-wheeled, 38-tonne heavy-duty truck, the Volvo FH. And it was fully electric.

EVs won’t tow your boat? This beast will actually tow a bloody big boat, and a gross load of up 44 tonnes. And it will do so with ease. It will also do it in relative silence, with no crunching of gears, no loud braking, and no emissions.

Last Thursday, Volvo Trucks began series production of its range of heavy-duty electric trucks – the FH, the FM and the FMX, which represent long haul, medium haul and construction applications – taking its total electric truck offerings to a full suite of six.

These heavy-duty trucks take about six hours to go through the Volvo production line at Tuve, in Sweden, from initial frames to completion, and when we – a group of Australian journalists – turned up at Volvo HQ in Gothenburg on Friday there were already two newly built electric trucks ready for a test drive. 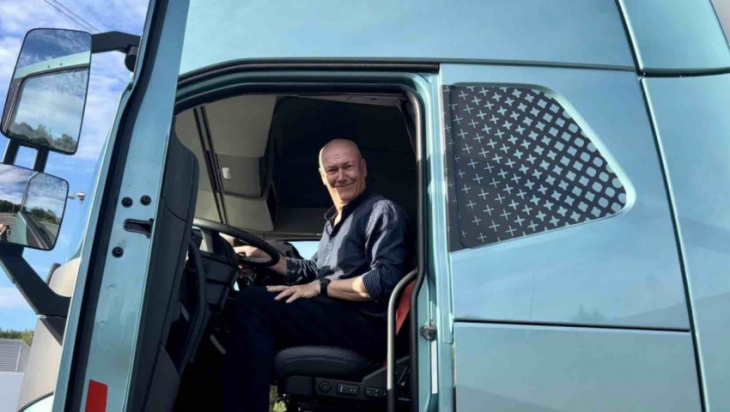 And The Driven got the bragging rights of being the very first, courtesy of the fact that we didn’t have a trucking licence so had  to content ourselves with a few laps of the internal 2km track that the company uses for tests and product pilots – before the big boys got to take them on public roads among traffic.

So, let’s be clear, it was our first time in the driver’s seat of any heavy duty truck – fossil fuel or electric – and on the private test track we were not dealing with traffic, pedestrians, cyclists and narrow roads.

The second is the instant torque. No, it doesn’t take off and defy gravity up a hill like my Tesla Model 3, but the truck doesn’t have to grind through the gears as it rolls away with a heavy load and negotiates inclines with a full load. That’s important too, both for the noise factor and the energy efficiency – the revolutions are kept reasonably constant. 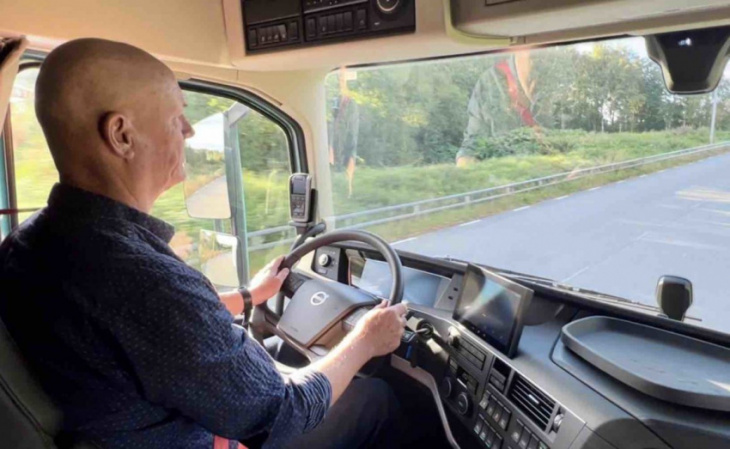 The third thing is the manoeuvrability, particularly at low speed. And, I have to admit, it was so easy to manoeuvre that I didn’t even realise until afterwards that the trailer was fully loaded. It was pulling 38 tonnes.

The FH, which The Driven drove, has a 540kWh battery and a range of around 300kms, which is nearly half – 45 per cent – of the distance of all goods transported in Europe. It operates with Volvo’s ishift gearing system – the difference is that rather than starting through each individual gear at take-off, it mostly starts in seventh, and might use only a few more.

The range means that in Australia, these type of vehicle will be excellent for inner city and close regional work such as ports, retail logistics and the like – which means they can eliminate the dirtiest and noisiest of trucks as identified by the recent Grattan Institute report.

Battery electric vehicles won’t yet do the long-haul routes that are common in Australia, without a major leap in battery technology, and that will likely be the province of hydrogen fuel cells or biofuels, but it will cover the vast majority of trucking applications.

Still, Volvo has also announced an e-axle, which means that the electric motor can be housed in the axle frames rather like a Tesla or another car. That means no gear box, and more space for battery storage. 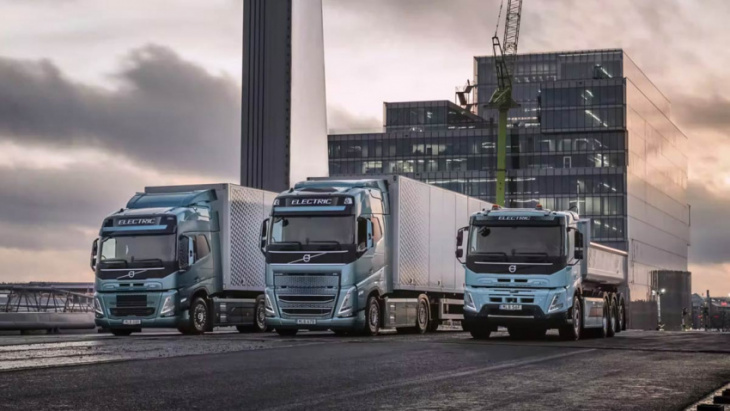 FH, the FM and the FMX

The FH, FM and FMX will be available in Australia from next year, and production in Australia will begin in 2025 at the Wacol plant near Brisbane. Volvo has already taken 80 orders for electric trucks in Australia.

So what do the experts think of the electric heavy duty trucks? The three experienced trucking journalists that I travelled with were all impressed. The reality is that once an electric truck is experienced, no driver wants to go back to diesel and the internal combustion engine.

Gilberto Enkerlin, from Oslo-based earthworks company Tom Wilhelmsen, already has seven electric tipper trucks from Volvo and says all his drivers love the electrics. The one hold out was the guy with the tatts and the gold chain.

“I said you have to try it, and he pointed at this roundabout – it was 60 meters away and he said ‘I’ll go there and back. That’s it’,” Enkerlin recalls.

“We ended up driving 40 minutes he came back with a big smile. I didn’t rub it in, I just let him be. He knows it’s a better place for him to work and to be.”

Enkerlin says his company intends to be fully electric (35 trucks) by 2025. He says it is key to his future business – the local council demands sustainability outcomes in its tenders, and he says the absence of noise, dust and diesel fumes means local residents barely notice their presence in inner city projects.

Kjetil Bergflodt, the head of alternative drivelines at Volvo Norway, says once drivers have had a go with an electric truck, they love it. “The drivability is like nothing I’ve ever tried before.”

And apparently Australian drivers are similarly impressed. A group of customers had a test drive earlier this year, and summed up their response. “They said ‘this is good shit’.”

The author travelled as a guest of Volvo Trucks.

Keyword: “Not like anything I’ve tried before:” First drive of Volvo’s heavy duty electric truck