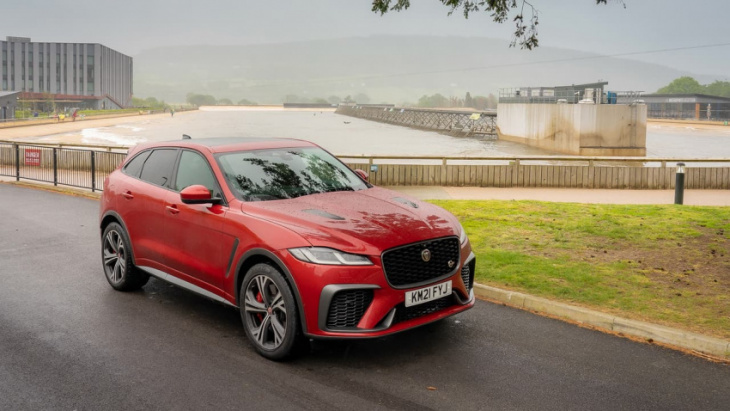 Does Jaguar's V8 super-SUV still have a role to play?

In 2025 Jaguar will re-emerge, butterfly like, from its chrysalis. A brand reborn. That’s the plan at least: all-electric, all-new, a change of direction, an abandonment of the past. So Jag’s existing range has to soldier on for the next three years, without an update or a facelift. Tough gig. It’s meant Jaguar is slipping off our collective radar. They still sell the XE – did you know that?

They do an F-Pace plug-in hybrid, too. It promises 33 miles of e-range, a stepping stone into that brave new world. Uh, this isn’t that. Because the dawn of an all-electric Jaguar age means no more supercharged V8. So what we have here is an F-Pace SVR with a supercharged V8. Once again: supercharged V8. How good does that sound tumbling out of your mouth? I can’t say it without smiling.

Partially out of self-conscious guilt, if I’m honest. I’ve long struggled to see the point of any super-SUV. I know they sell hugely, but it tends to be to the kind of people who, well, let’s just say they appreciate cars in a different way to me. And I’m coming in to this from a Porsche 911 that trod so lightly and efficiently in all it did: tyre wear was minimal, it did 28mpg no matter what I did, it was a low impact, high reward sports car. And what I’ve replaced it with seems, on first inspection, the inverse of that.

So the F-Pace is starting out on the back foot. And it hasn’t really got on the front foot yet. It doesn’t ride nearly as well as the Porsche – it’s tall and heavy and needs to keep control of itself, so it’s stilted and jittery. I drove it to Wales for a wedding and while I enjoyed the massive torque and thunderous noise, it wasn’t actually very relaxing. You know how you’re more aware of a car’s deficiencies when you have a passenger? Well the F-Pace has deficiencies – it’s noisy on concrete motorway sections (I have sometimes found myself reaching for the knob and then realising you can’t turn the volume up on a conversation), moves and jiggles and from the corner of my eye I could detect my wife being buffeted. It’s not a comfy cruiser, although I struggle to think of any equivalent SUVs that do better. Like them, the SVR is trying too hard to be sporty, where the Porsche did it effortlessly.

These drawbacks don’t stop people buying fast SUVs though, do they? So I need to persevere and see if I can discover what the fuss is about, the reason for their success. This one, relative to others, isn’t too objectionable, isn’t much more aggressively styled than the regular F-Pace.

It helps that it’s on the regular 21-inch wheels and hasn’t ‘benefited’ from exterior black packs, deployable side steps, carbon mirrors and so on. Firenze Red is free and tasteful. Extras include a panoramic roof (£1,275), Meridian surround sound (£420), matrix LED headlights (£1,300) and wireless charging (£300).

Knowing Jag is on the verge of this major restructure, I had anticipated the F-Pace would already feel dated. It doesn’t. Its screens, menus and controls are the same fitted in the brand new Range Rover. It’s a good size too, that bit bigger and more useful than a Merc GLC or Porsche Macan without being as unwieldy as a Range Rover Sport or BMW X5.

But here’s the bigger question: does any super-SUV have a relevant role to play? Especially now, as petrol is winding down. I’ve never run one before, and although I’ve driven them extensively for group tests, this feels like new territory. I’m yet to be convinced by what I’ve found.

Old English In America: A Jaguar XJ6 With Attitude

The 2023 Jaguar F-Type and the Perils of Growing Up

Classic Jaguar E-Type Getting Tesla Powertrains Thanks To ECD

Queen Elizabeth’s former Jaguar X Type – her ‘second favourite vehicle’ has sold at auction for more than £43,000. The regency green 2009 estate car has a barley leather interior and was first owned by HM the Queen, often pictured driving it out of Windsor Castle. While the late monarch’s ...

You can save more than £20,000 on these desirable electric cars if you buy them at three years old, but which is the better option?...

Luxury car maker Jaguar Land Rover is cutting activity at its Solihull factory until the spring as it battles with a global shortage of semiconductors. The company said production would be reduced at the plant between January and the end of March as it prioritises more profitable models. Semiconductors are ...

Jaguar F-Pace – The Telegraph Jaguar Land Rover is being forced to cut the production of cheaper models at at least one of its plants as it battles a worsening parts crisis. The car maker (JLR) will move to one shift per day from two at its Solihull plant ...


View more: You can be one of the 1st in the world to own an armoured electric Jaguar – Pricing


View more: 5 Things to Love About the Jaguar F-Pace SVR

Jaguar Land Rover has opened a new job portal for recently displaced tech workers from Twitter, Meta, and Amazon; the automaker is looking to fill over 800 positions. As the tech sector has entered a turbulent year, resulting in many companies instituting their first-ever layoffs, the automotive industry is ...

Everything you need to know about the Jaguar I-Pace

This Jaguar XJS Is Actually A 1994 Chevrolet Camaro Z28 Underneath

The Insider: Jaguar Land Rover CEO on the rise of the PHEV

Jaguar Will Kill the F-Type After the 2024 Model Year

Jaguar F-Type prepares to bow out with 75 special edition

Used test: Audi A7 vs BMW 5 Series vs Jaguar XF

Is the Jaguar XJ good for families? Here’s our verdict.