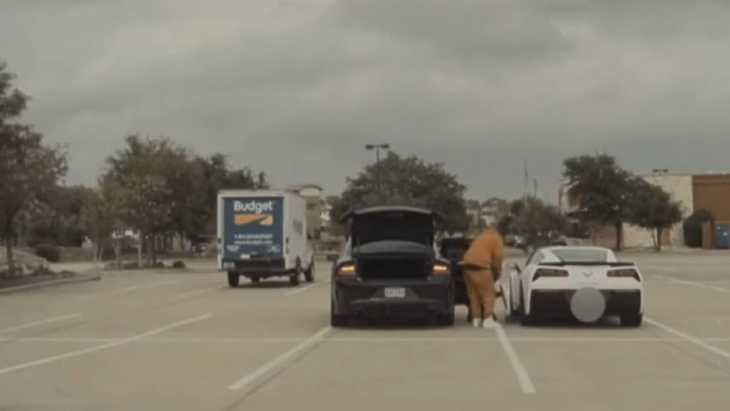 Is this the new theft trend?

Getting your car stolen is the worst, but having some jerk chop off the catalytic converter is still pretty bad. Now we have people swiping wheels off parked cars, as shown in a video of two thieves stealing a wheel off a C8 Corvette in Texas. Actually, this isn’t anything new, but the local news sure seems shocked such a thing would happen and so “quickly.”

Find out what wheels are super popular with thieves here.

Back when I was a kid the old joke was that the neighborhood kids were so nice somewhere, they would rotate your tires for free. Steal wheels and the tires mounted on them is anything but a new trend – it’s been going on for decades. But the video of the C8 wheel theft seems to introduce a new concept.

The theft of the wheel took the two amateur thieves just a minute to pull off, a fact which also seems to shock the local newscast. Have they ever seen NASCAR pit crews? What about Formula One? If anything, the two guys swiping the wheel are slow, especially since they have a hydraulic jack and what appears to be an impact driver.

According to Southlake Police, the video of the crime was taken by a Tesla which was parked across the way. The whole thing went down on the afternoon of November 3 by a 24-Hour Fitness. As the thieves are working, they not only are wearing masks, their sagging pants almost fall all the way off.

You’ll note the suspects are driving a black Dodge Charger. We are just shocked a Charger has been attached to a crime, something we just never have seen (that’s sarcasm). Check out the video for yourself and remember to submit any tips you might have to Southlake Police.

Screenshot: WMUR9 The 2024 Chevrolet Corvette E-Ray certainly isn’t for everybody. Some simply have no interest in a Corvette at all. A lot of people who would like one won’t be able to afford the six-figure price even before dealers start adding a markup. Others prefer the more track-focused ...


View more: A Bunch of Corvette Fans Camped Out Overnight to Be the First to Reserve a New Corvette E-Ray

The Stingray, E-Ray, and Z06 all come together in Bowling Green, Kentucky at the rate of 200 cars per day.


View more: How racing has improved the Chevrolet Corvette Z06

The National Corvette Museum opened NCM Motorsports Park in 2014. In the years since, it has become a beloved road course in a market long starved for one.

Screenshot: YouTube.com/SavageGeese Since 1981, Chevrolet’s Bowling Green production plant has had one singular focus: building the Chevrolet Corvette. But in those 41 years, things have changed down in the Kentucky facility — processes have grown leaner, meaner, more technologically advanced and precise. This, of course, all becomes evident in ...

The Corvette Z06 GT3.R will begin racing in the 2024 season, so let’s hope Tadge and crew have a Z06.R package in the works! Just as the Corvette Racing C8.R previewed what was coming in the C8 Z06, now it’s the street car’s turn to influence the race car. ...


View more: This Is How Chevy Builds the C8 Corvette