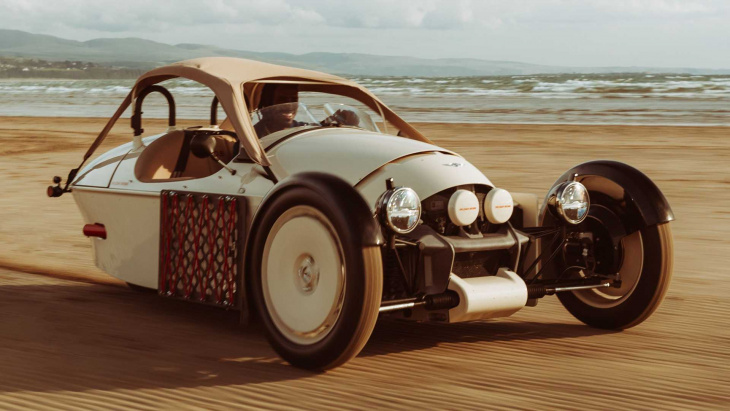 The company is highlighting the model’s customizability.

In February, Morgan launched its new Super 3 three-wheeler, revealing its most customizable model ever. Morgan is now highlighting the Super 3’s personalization capability heading into the holiday season with a new collaboration. Morgan has partnered with swimwear brand Orlebar Brown to design a one-off Super 3 with unique interior and exterior touches.

The collaboration has resulted in a bespoke Super 3 finished in Pastel Beige paint. The car features subtle Orlebar Brown branding on the outside, with the custom, laser-cut geometric luggage racks with red bungee cords on the sideblades drawing the most attention.

Inside, Morgan and OB finish the cabin in matching Khaki Sand technical fabric, with red accents used throughout, a brand color of Orlebar Brown. The company also used the material for the removable canopy. Morgan’s special projects team adapted the Super 3 to accommodate a sunshade, which fits over the roll hoops and fly screens with specially adapted mounts. It gives passengers a reprieve from the sun in the otherwise open cockpit.

Red bungee cords are also inside the vehicle, while the instrument cluster features Pastel Beige gauges. The final bit of branding is the OB-liveried, body-color gearshift surround.

Morgan designed the new Super 3 from the ground up, with a bonded aluminum monocoque platform as the base. Power comes from a Ford-sourced naturally aspirated three-cylinder engine that mates to a five-speed gearbox from the Mazda MX-5. However, Morgan modified the transmission for its needs.

The one-off Super 3 will appear over the next 12 months at some of Europe’s most exotic locations. The Super 3 you can buy is now in a showroom worldwide. The car is available in the UK, Europe, and the US.