The Morgan Motor Company has long attracted a dedicated following with its beguiling and largely hand-built machines featuring ash-framed bodies and floppy side curtains. The Plus Four—released in 1950 and a descendant of the 4/4 that first went on sale in 1937—steadfastly defied a changing world to remain in production, looking much the same as it ever did, with a spindly steel chassis and an antediluvian sliding-pillar front suspension and cart-sprung rear axle intact underneath a classic 1930s-style body. Until now.

Under the direction of Andrea Bonomi and his family’s private-equity firm Investindustrial since 2019, the company founded by HFS Morgan in 1909 has boldly ambled into the future. It has revitalized its cars, injecting unheard of comforts, practicality, and safety—enough that Morgan will be returning to the U.S. market early next year, ending its latest regulatory-driven absence—while maintaining their vintage charm. 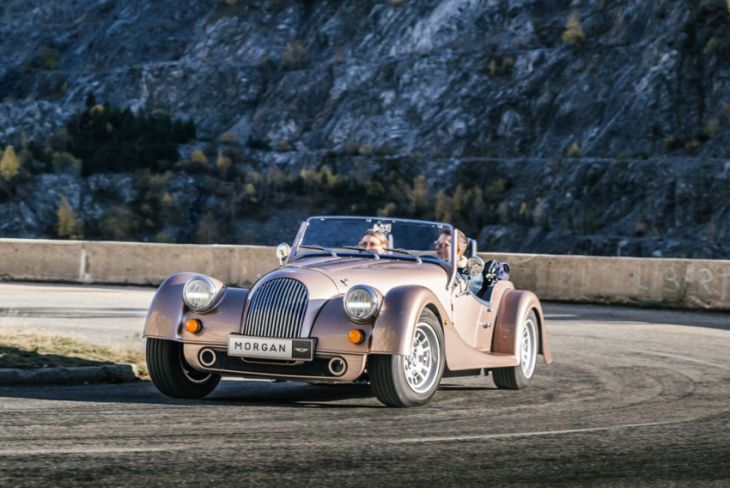 At the company’s antique red-brick factory on Pickersleigh Road in Malvern Link, Worcestershire, the skilled workforce continues to do much by hand to craft the plant’s output of fewer than 1000 cars a year. Although you might not know to look at them, the cars—still with those shapely aluminum panels cloaking ash frames and leather trim in abundance—are finally fit for the moment. Several body panels are pressed out of house now to save time and ensure additional accuracy, though others are beaten by hand in the newly expanded Malvern facility that builds strictly to order and still cries “Ye olde.”

The company’s new CX-Generation platform, a bonded-aluminum tub that closely recalls Lotus’s Elise, is thoroughly modern and twice as rigid as Morgan’s outgoing platform. A contemporary, all-independent suspension offering unprecedented ride quality is now appended onto it. No longer can it be fairly compared to that of WWI-era Mack trucks. 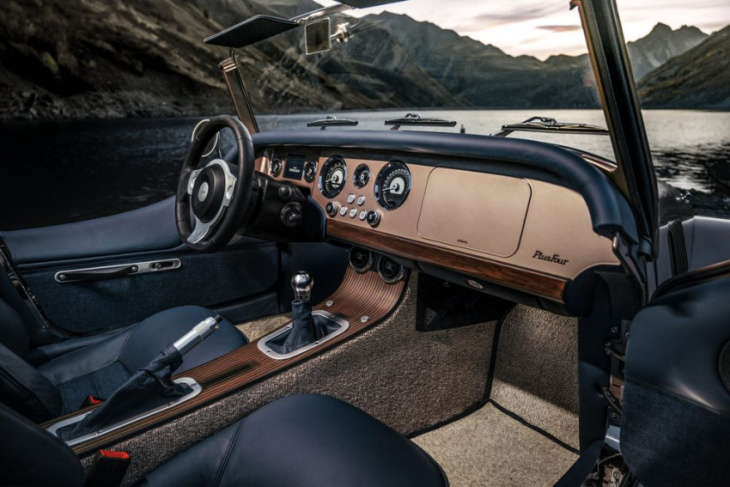 Newly installed power steering lacks the sort of feel we are used to in a Morgan, but on the other hand, you can navigate corners with speed and security never before experienced in a Malvern product without the ever-present danger of errant bumps sending one bouncing off into the hedgerows.

Leveraging the company’s relationship with BMW—which began with its use of the firm’s V-8s in its Aero 8 models in 2001—the Plus Four uses the Bavarians’ latest turbocharged 2.0-liter four. It provides 255 horsepower and 295 pound-feet of torque, moving the light (2200-or-so-pound) machine with alacrity. The engine is paired with an eight-speed automatic whose distinctive BMW-issue gear lever pops out of a new center console—a symbol of Morgan’s brave new world. Unwelcome though it might seem, the paddle-shifted gearbox actually suits the powerplant nicely and delivers a stated zero-to-62-mph time of 4.8 seconds, which we reckon will amount to a 60-mph arrival in 4.5 seconds on our side of the pond.

A six-speed manual option is available in the U.K. but won’t be offered in the U.S., presumably for certification reasons. It’s not all bad news, because the engine torque is limited to 258 pound-feet when mated to the manual, and the car will also consume more fuel and require four extra tenths (plus four, it would seem) to achieve 62 mph. A larger BMW inline-six, making 335 horsepower and 369 pound-feet of torque, powers the wider and heavier Plus Six model, but that, too, won’t be sold to us Yanks. 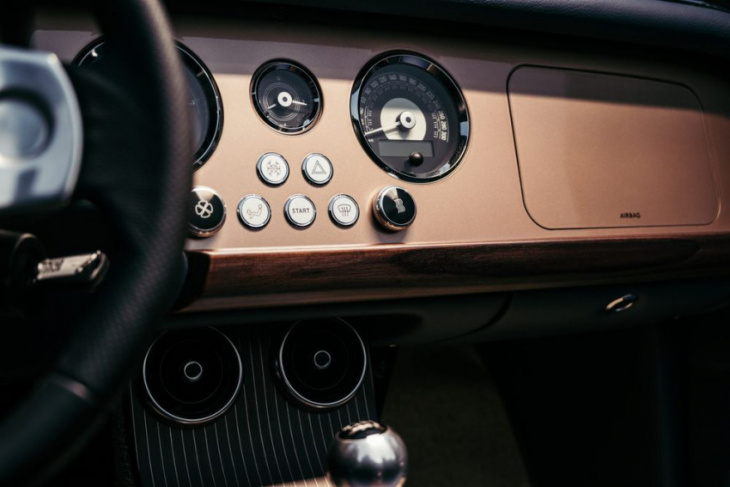 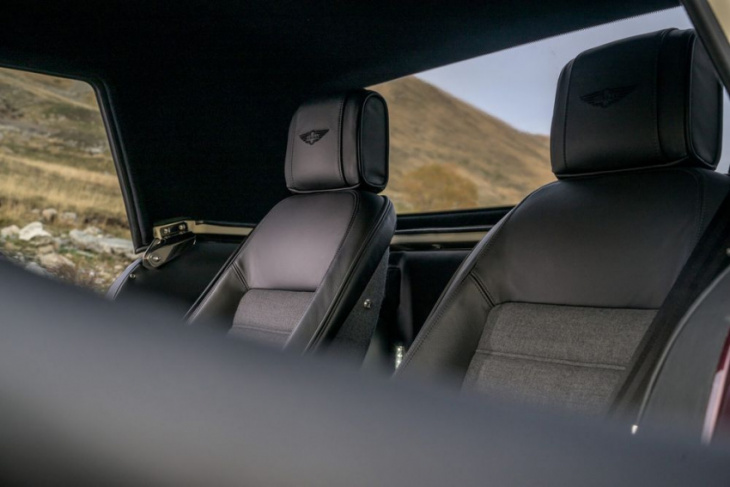 Welcome to the New Century

Almost as eye-opening as the revitalized Morgan’s ride is its range of comfort and convenience upgrades. In addition to being heated and ventilated, the leather seats are wider and more comfortable, as is the handsome cockpit. A digital instrument display in front of the driver jars slightly, although traditional gauges hold court in the center of the dash in the time-honored Morgan fashion. Features such as air conditioning, airbags, power door locks, Bluetooth connections, and USB ports lead one to exclaim, “Blimey, it’s almost like a real car!”

The newly designed convertible top is also due for commendation and didn’t once leak over the course of several rain-filled days touring England. The manual lid is only slightly more difficult to erect than a Mazda Miata’s top, and a convenient release allows its rear section to be quickly raised for stowing luggage behind the seats. Improved sealing helps the old-school side curtains actually keep out the rain, another revelation. It also reduces, but doesn’t entirely eliminate, wind noise, though it’s never bad enough to diminish the urge to travel regularly in the fast lane. An electric windshield defroster, coupled with the marque’s venerable three mini-wiper-blade assemblage, keeps the view of the road ahead clear, which, combined with the powerful four-wheel disc brakes, further imparts a sense of security largely absent in previous Morgans. 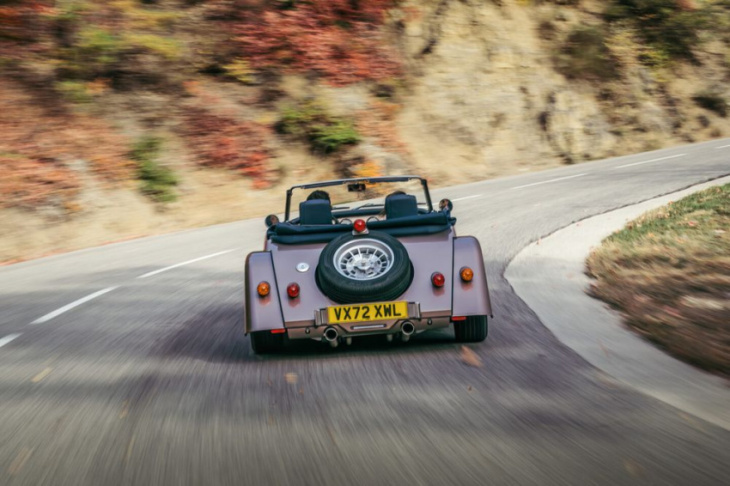 The new model stands on its own two feet as a captivating bespoke sports car with classic overtones and modern performance. It’s also surprisingly good value for a lovely, largely hand-built machine—expect it to launch in the U.S. with prices starting around $70,000.

The firm may be old, but boy is it also plucky. And the new Plus Four gives us hope that when a battery-powered Plus Four arrives one day, it will continue to tug on the heartstrings just as its storied predecessors have for so very long. Good show, chaps.

One-Off Morgan Super 3 By Orlebar Brown The company is highlighting the model’s customizability. In February, Morgan launched its new Super 3 three-wheeler, revealing its most customizable model ever. Morgan is now highlighting the Super 3’s personalization capability heading into the holiday season with a new collaboration. Morgan has ...

Morgan’s Plus models upgraded with chassis, tech and styling tweaks


View more: 2023 Morgan Plus Four and Plus Six pick up key updates

The Morgan Motor Company has announced that it will be updating its Plus Four and Plus Six roadster models from January 2023. Facelifted models gain a few interior changes, additional trim options and technical enhancements such as electronic stability control and a newly-developed braking system. On sale since 2020 and ...


View more: Morgan updates Plus Four and Plus Six Roadsters

JP Morgan: Used Car Prices Have Peaked; Get Ready for Deals in 2023