Nissan’s Lunar Rover Could Hint At Styling For Nissan Rogue 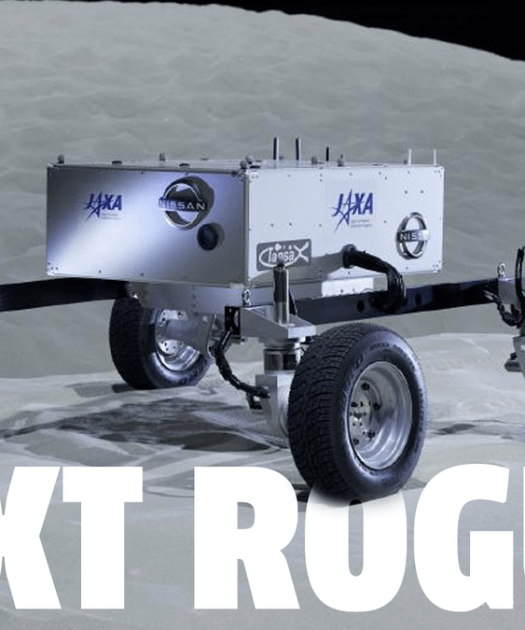 Nissan has been working with Japan’s space exploration agency, JAXA, to develop a lunar rover prototype with Nissan-developed electric all-wheel control technology derived from Nissan’s e-4ORCE system developed for their upcoming electric crossover, the Ariya. It has also been speculated, solely by me at this point, that the Nissan-JAXA rover may also be a testbed for future Nissan SUV styling that we could see on the next-generation Nissan Rogue.

The rover is designed to be an uncrewed, autonomous robot, using what appears to be one motor per wheel, mounted at the wheel, to traverse the often difficult and unpredictable terrain of the lunar surface.

Nissan’s press release describes the scope and goals of the project:

In its joint research with JAXA, Nissan is evolving e-4ORCE technology to improve its performance in sandy terrain and other harsh conditions. When cars are driven in sand their wheels frequently spin and dig in, impeding progress. A high level of driving skill is required to avoid getting stuck. To meet this need, Nissan has developed driving-force controls that minimize the amount of wheel spin in accordance with surface conditions.

Through the joint research, Nissan aims to contribute to the technological evolution of automotive technology and space exploration technology by sharing knowhow gained from test-vehicle development and combining it with JAXA’s knowledge of rover research.

The team also produced a video showing the rover in action:

In addition to individual control of the torque going to each wheel, it appears that each wheel is independently steerable as well, a departure from the baseline e-4ORCE technology.

G/O Media may get a commission

Regarding the styling of the rover, many observers would simply say that it’s purely utilitarian, with no real regard to aesthetics and all bodywork is simply there to house and protect the necessary components.

And while, sure, you could construct a very passable replica in an afternoon with only a trip to Home Depot, I think everyone is being foolish and naive. Nissan is showing us this for a reason, and I think it’s to prepare us for their next-gen styling concepts for their upcoming SUVs and crossovers.

Based on information from sources I’ve imagined, I believe the JAXA rover will provide the inspiration for the 2026 Rogue, which will likely look like this, according to this concept design sketch I found (on my own computer):

Again, no one at Nissan has confirmed this in any way whatsoever, but let’s be real. You don’t show a sleek lunar rover like that and not expect it to become a tease for future styling, right?

Nissan is recalling 125,215 Nissan Rogues from the 2017 model year to check for corrosion in their wiring harnesses that can potentially lead to a short circuit and/or spark, which could cause a fire, or at least wreak havoc on the car’s electronics. “In affected vehicles, a suspected vehicle ...

New material uncovered four years after his ouster as CEO at Nissan backs Ghosn’s claim that a post-retirement payment scheme had the support of top management and wouldn’t take effect without board approval.

The car could be an indirect successor to the Nissan GT-R, according to reports A stand-alone model from Nissan’s performance arm, Nismo, is on the way for release globally sometime during this decade, according to the sub-brand’s CEO. After the long-lived Nissan GT-R was discontinued early this year, more ...